This time of year, you may see some plants rising in the garden that look like they have potential. Something about their form makes you hesitate to peg them as weeds and pull them out. Maybe, you think, it's better to wait and see if all that growth yields a substantial flower. Here are some weeds that have fooled me into a wait-and-see at some point in the past. 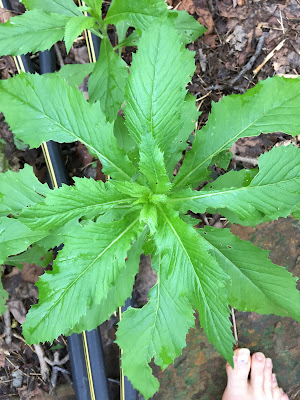 Pilewort has a thick stem and strong vertical intent. It will give you pause because it looks like it's headed somewhere, which, it turns out, is mostly up. All that vertical ambition climaxes in a gangly jumble of small flowers that attract pollinators but lack color. The name comes from the white seedheads that look like cottony stuffing for a mattress. If left to scatter, they will give rise to many more plants to be pulled the next June. 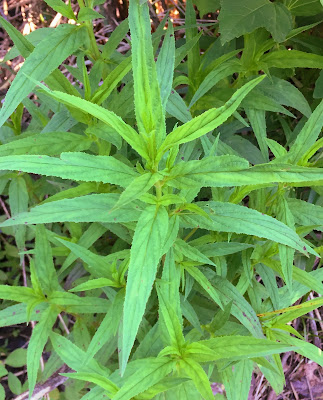 Willow herb has a nice form, but can get weedy in wet soil, and the flowers are too small to create a visual effect. 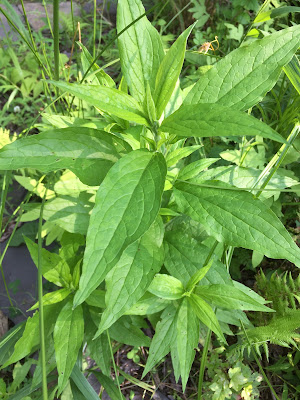 A member of the borage family, this plant, too, has an attractive form that looks like it could generate an attractive flower. If you leave it in, you'll end up instead with a bunch of stickers to pick off your clothes. Appropriately enough, it's called stickweed. 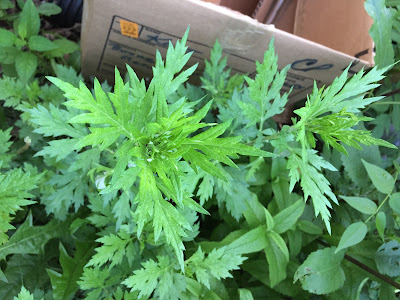 Mugwort has a nice resiny odor to the crushed leaves, and looks like it could grow an attractive flower, but doesn't. Instead, its capacity to spread underground to form dense masses makes it a threat to any garden. The cardboard box in the photo will be laid flat to smother the weeds. 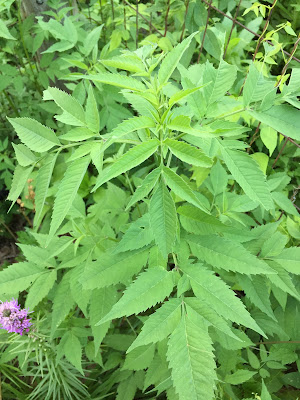 There are Bidens with very showy, sunflower-like yellow flowers that bloom along Quaker Road later in the summer. And then there is the Bidens species that somehow made it into my garden, which produces flowers that lack any show at all. We had the showy species flourishing along a bike trail in Durham, NC. Gorgeous, but it grew so enthusiastically that it started obscuring the trail. Though it reaches great size, Bidens is an annual and can be easily pulled. 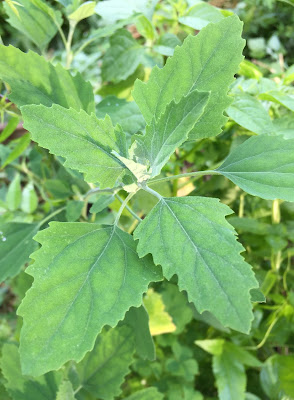 Even though I know that lambs quarters doesn't make showy flowers, the plant fools me each year into thinking I'll get around to eating its tasty and nutritious leaves. Generally, I forget, but this year my younger daughter used some in a red lentil soup that was delicious. An annual, lambs quarters can be abundant one year, hard to find the next. Like pigweed, it can get enormous in abandoned plantings.

When pulling weeds, pull low and slow, so the roots come out. Weeding teaches the gardener to be strategic. Humans tend to have little time, while the weed is dedicated to growing and spreading 24/7. Best to weed when the soil is soft, to get the roots, and before the weeds go to seed. To keep them from rerooting, best to drop them where the roots won't touch the ground, and where the sun can dry them out.