Some time back, Rachael Winfree, an entomologist at Rutgers, generously agreed to meet with us at the pollinator garden we're creating at Herrontown Woods, to discuss ways it might better fill the needs of bees. For an hour, she poured out information while I scrambled to take notes. More can be found at her website, at the bottom of this post. 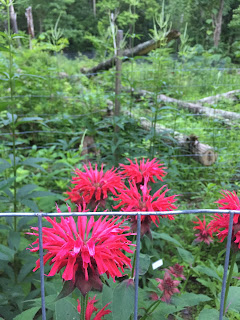 DEAD WOOD: Her first thought was that she liked all the wood strewn about, in the form of trees felled by wind and ice storms over the past ten years. The bodies of trees live a long life after death, providing a home for all sorts of insect life. Fallen trees are one of the places bumble bees make their nests underneath.

SOIL: She liked less the soil--mostly heavy clay. The many kinds of bees that build their nests underground prefer looser, more sandy soil. Perhaps we could bring some sand in to lighten up some areas, she suggested, or dig up the soil here and there to make the bee's job of digging easier.

SLOPING GROUND: Slopes would be good, too. Water runs off a slope better, so there's less chance that the bee's underground home will be flooded. Our pollinator garden has no hills, but it does have the hillocks made when a tree is uprooted. The rootball angles up into the air, leaving behind a hole in the ground with slopes on all sides. America, it is said, was very lumpy back before western settlement, as each tree over the millenia would eventually fall, its raised rootball leaving a depression.

XERCIS SOCIETY: She mentioned the Xercis Society and its website on multiple occasions. She's on its board, and thinks it's one of the best sources of ideas for creating habitat for insects.

WASPS VS BEES: Wasps visit flowers not to collect pollen but to sip enough nectar to get through the day. They are therefore poor pollinators, since they don't collect pollen and therefore are less likely to spread pollen from one flower to another. To reproduce, they prey on other insects, which they collect and use to nourish their young.

BEES ARE VEGETARIANS: Bees are essentially vegetarian wasps. They use the protein in pollen to feed their young, collecting a bunch of pollen and then laying an egg in it. Different bees carry pollen on different parts of their bodies. The classic honey bee, the cow of the bee world, not native but widespread in the service of agriculture, carries pollen on the back legs, as do bumblebees. One bee carries pollen on its belly, which is very cute to see when one turns the bee over.

SOCIAL VS SOLITARY BEES: Social bees, such as honey bees and bumble bees, are in the minority. Most types of bees are solitary. These types are very unlikely to sting, because stinging is a very dangerous activity for a bee, and a solitary bee is on its own. Bumble bees and other social bees are "on the wing" longer than solitary bees, meaning that they are around all summer rather than for just a couple weeks.

BEES IN DECLINE?: Though the news media has been reporting that bees are in decline, Rachael contends that there isn't all that much evidence to back that up. There are no long-standing studies of bee numbers to reference. Complicating any effort to tally bee numbers, there are only three taxonomists who can identify all 160 or so species of native bees in New Jersey. (I didn't catch the names, but two of them may be John Ascher and Jason Gibbs. When googling John Ascher, I came across this very useful looking manual: How to catch and identify bees and manage a collection) Bees, unlike plants, must be killed in order to be identified, and though some of that is necessary for research, it's not necessarily an activity entomologists want to promote. Bees may actually benefit from the habitat fragmentation that comes with suburban sprawl.

SPECIALIZED BEES: I had wondered if there are specialized bees that depend on a particular plant species that we could then plant to help that bee species. She mentioned two to get me started: a bee called Andrena erigeneae that feeds exclusively on spring beauty (Claytonia virginica), and the Rose-mallow Bee (Ptilothrix bombiformis), which has a black velvet appearance and feeds on Hibiscus. (I found this informative article that lists many others: https://vnps.org/specialist-bees-need-special-plants/)

NESTING: Bumble bees nest under logs, or at the base of bunch grasses.

MORE INFO: Her website has useful pdfs, including a primer on New Jersey bees.
Posted by Stephen Hiltner at Sunday, June 30, 2019