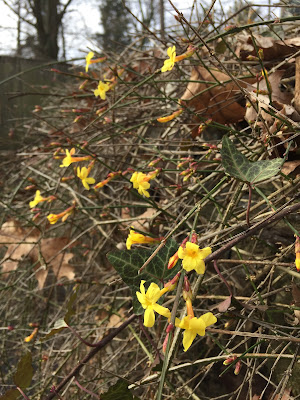 Flowers in January. We have a shrub that's easily fooled by the weather, which one friend describes as "weirdly, wrongly warm." It's the kind of day to split the heart in two. The warmth feels good, but the portent feels bad.

Hard to believe that just five years ago we were skating on Lake Carnegie in early January, appreciating the beauty and variability of all the crystalline patterns. But it's always possible that a pulse of arctic air will come our way and stay long enough to freeze the lake once again--just less and less likely. 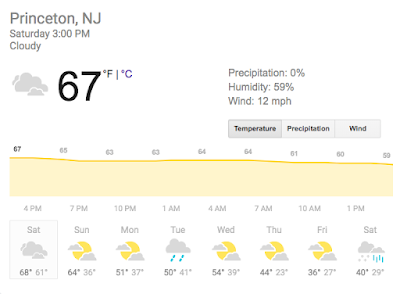 If you google the NJ state climatologist webpage at Rutgers, you can find charts that show the warmest and coldest temperatures on record for any given day at various locations around NJ. Looks like the previous warmest temperature on 1.11 near Princeton was 65 degrees in 1975. Record highs for some of the days in January date back to the early 20th century, offering an opportunity for climate change deniers to cherry pick the data and claim the earth isn't warming after all. Only when you look at the data as a whole does a clear trend become apparent. For instance, in this century, this month, and this part of NJ, there have been 14 new records for warmest days and 4 new records for coldest.
Posted by Steve Hiltner at Saturday, January 11, 2020