The Missing Mildfire in Australia

Repetition is a powerful force in our culture. For many people, a lie can be turned into the truth simply by saying it over and over. And one of the lies we are told over and over, even in well-intended daily news reporting, is that fire is the enemy of the forest. It's a lie of omission, a one-sided portrayal that leaves readers with a false impression, time and time again.

The reality is much more interesting. Many species are adapted to periodic fire, and languish without it. Pines of various kinds in the U.S. and eucalyptus in Australia have evolved clever adaptations to encourage and survive fire. Depending on the species, they may shed leaves or bark that resist decomposition, and thus accumulate on the forest floor to carry a fire along. Ever wonder why oak leaves are slower to decompose than maple leaves? Oaks gain advantage from periodic fire, and have thick bark to protect the trees from the fires that their persistent leaves promote. Many kinds of pines and eucalyptus have "serotinous" cones or capsules that release seeds only after being heated. The seeds drop to the ground after a fire has swept through, make contact with the newly exposed soil, and then the seedlings prosper in the ash fertilizer and more open conditions a fire leaves behind.

Fire-dependent trees and prairie grasses depend on periodic small scale fires. These mildfires, as I like to call them, burn cooler, so they don't sterilize the soil. They burn lower, so they don't spread to the canopy. Fire-dependent trees and herbaceous plants quickly spring back to life once the fire has swept through. Periodic burning makes the forest safe, by burning through fallen branches and leaves. If left unburned, these fuels can accumulate to dangerous levels and cause the truly destructive fires we've seen in California and Australia. Fire-dependent forests, then, accumulate a congestion of persistent leaves and other fuel that can become dangerous if not relieved by the cleansing and renewal that periodic mildfire brings. A parallel can be seen in people who lack a healthy outlet for feelings that otherwise build up.

Smokey Bear, then, needs to be fired, so to speak. At the same time, fire can be dangerous, and mustn't be casually started. How does one use a potentially dangerous tool to keep fire-adapted forests safe? In the U.S., people are trained to do carefully planned and prescribed "fuel-reduction" burns. It's a necessary but cumbersome approach, and the result is that many forests that need mildfire go unburned.

The situation is greatly complicated by irresponsible homeowners who build in fire-prone landscapes. A recent NY Times article offered an apt description:


" ... many people are putting themselves at risk by building homes in remote, fire-prone areas without taking essential steps to make the homes fire-resistant, like installing metal roofs. Extensive research shows that wildfires will usually leave properly built and maintained homes with little damage, but rural communities have hesitated to adopt strict building codes.

“People like to do whatever they damn well please on their own land,” said Timothy Ingalsbee, a former firefighter who now runs an advocacy group,Firefighters United for Safety, Ethics and Ecology. “But when a wildfire comes, they’re calling Uncle Sam saying, ‘Please, come save me.’” 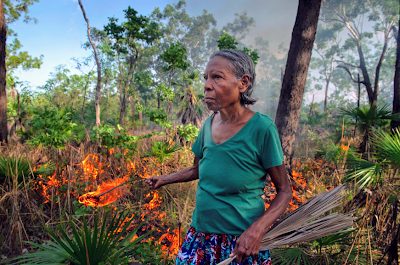 The article gave a portrait of a less cumbersome approach used by the aborigines in northern Australia. As was done in North America centuries ago, aborigines use mildfire to tame and stimulate the forests they inhabit.

The article carries an important message:


"Far from being calamities, fires are now seen by many experts as essential to improving the long-term health of the forests, thinning them and creating greater variability on the landscape. Yet that awareness has yet to penetrate the public consciousness. People still think forest fires are bad and expect the government to try to stamp them out, even in remote wilderness areas. Federal and state firefighting costs in some years approach $2 billion."

Why, as the article states, has the public remained unaware that these conflagrations are caused by a lack of beneficial fire in the landscape? I offered one reason in a comment on the article:


Since the massive Yellowstone fires of 1988, and probably well before, periodic articles such as this one have served as useful correctives, but they have had little impact on policy. One reason may be that the day to day reporting of wildfire continues to present fire as the enemy. That repetitive message has far more power than these periodic articles that say, "Oh, by the way, fire is actually an important part of fire ecology, and the real enemy is a dangerous buildup of fuel due to fire suppression."

Nature is complex, while storylines are kept simple for easy consumption, and the result is a maintenance of the status quo that grows ever more costly and destructive. Knowing how important fire is for forest health, I read the daily reporting--which for some reason decides it's necessary to tell endless stories of victims while saying nothing about how nature works--and wonder how people are supposed to learn about fire ecology. The people who need to learn are not likely the ones reading this article. These periodic correctives are useful and important, but are not enough.

In a sense, the daily reporting that wrongly portrays fire as the enemy is like the accumulation of fuel on a forest floor that creates conditions for a periodic article whose insights into the ecological role of fire sweeps all the accumulated misconceptions away. This enduring cycle has its psychological satisfactions. It works for journalism, but works against the need for enlightened policy.

There's an important lesson about nature waiting to be learned by our culture. While the aborigines are immersed in nature, and see themselves as informed stewards of the complex forests they inhabit, we are largely disconnected from the natural world, and seek simple answers as to how nature works. Fire is categorized as bad, as is the carbon dioxide that is fueling the climate crisis. Yet fire and CO2 are important and elegant components of a functional nature. The real problem is too much of a good thing--fire so hot that it leaves in its wake a moonscape, and so much extra CO2 poured into the atmosphere that the planet becomes overheated and the oceans too acidic. Change, too, is a matter of amount. Though climate has changed through the eons, it is the unprecedentedly rapid pace of human-caused change that is proving particularly destructive. Journalism needs to find a way to convey these lessons, repeatedly, so that more than a peripheral few can learn.

I once heard a talk by the fire historian and author, Stephen Pyne. Grappling with a question about how best to time fire in the landscape, he stepped out of all the complexity of how to safely burn forests in populated areas, and imagined what he called a poet: someone off in a remote habitat, informed by knowledge, experience, and instinct, able to sense when the humidity, wind, and fuel loads of the forest were just right for a fire that would do the most good and the least harm. I often wondered who these poets might be. An article about how aborigines use fire may not change the world, but it offered evidence that the poets Stephen Pyne dreamed of are alive and well, if only clustered in one small part of Australia.
Posted by Steve Hiltner at Friday, January 24, 2020