Shedding Our Martian Ways: Coronavirus and H.G. Wells' War of the Worlds

A deserted airport. A civilization shut down by a virus. It makes me think of H.G. Wells' War of the Worlds, in which Martians conquer England with heat-rays and "black smoke", and seem unstoppable until, suddenly and surprisingly, they succumb to lowly pathogens to which they have no resistance. 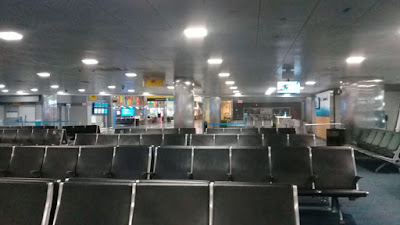 We have watched as civilization has been taken over by forces alien to reality, as cold and unsympathetic as Wells' Martians, with a rigid ideology that aims all skepticism outward, and severs the links between combustion and climate change, between spending and taxation, present and future, self and responsibility, words and truth.

For those of us who imagine a civilization that goes beyond fossil fuels, an incremental shifting to renewable energy sources would have been the least disruptive, but the political opportunists and denialists foiled that approach. Failing an expedited incrementalism, the transition would begin instead like our response to the coronavirus, with a reset in which all unnecessary combustion is suspended. Then, in that unaccustomed quiet and new sympathy for nature and the people to come, there would be a surge of economic activity as we rapidly build up renewable forms of energy, remake our lives in a vastly saner and more stable economy, one that would give us mobility and comfort in the present without stealing our future.

COVID - 19 has shown that such a reset is possible. We are a fabulously adaptable, resilient, resourceful species, and are rallying to collectively survive this shutdown for a virus as we would survive a shutdown to finally stop abusing the planet. That would be the finest way to celebrate the 50th Earthday coming up in April, as we begin to build our way back to abundance--the right way this time--give back to nature as it has so generously given to us, and reclaim a shared future. Let us shed our Martian ways, and become more human and humane, more of and for this earth.

Postscript: Some of H.G. Wells' books deal with the power of invisibility. In "The War of the Worlds," it is invisible pathogens that achieve what all the fire power of the English military cannot. And in "The Invisible Man," Wells shows how invisibility can wreak havoc. Climate change is playing out like a slow motion science fiction novel, in which a seemingly benign, invisible, odorless molecule radically changes the world and civilization's destiny. Wells also shows how invasion plays out in the plant world. Martians in the War of the Worlds, very much like our global trade, bring with them an invasive plant, the Red Weed, which quickly runs roughshod over the native species.
Posted by Steve Hiltner at Saturday, March 14, 2020