The Second Forest of Institute Woods 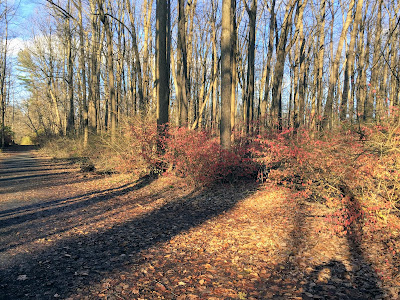 In the Institute Woods, towards the end of the day, towards the end of autumn, it's not just the trees that cast long shadows. In the understory, a shadow forest grows, composed mostly of nonnative shrubs--winged euonymus, linden viburnum, asian photinia, shrub honeysuckle, multiflora rose and privet. Having evolved on a different continent in a different climate, they hold their leaves long after most of the native woodies have dropped theirs. Dominating the understory, these shrubs and vines constitute a second forest that serves up a second autumn, shedding their conformist green to show late-season reds and golds. 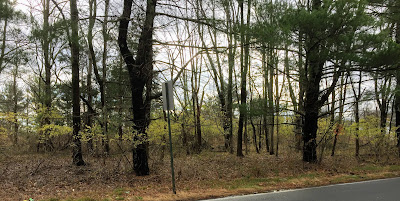 There are second forests all around Princeton and beyond. The light green close to the ground in this photo is honeysuckle shrubs along Terhune Rd. 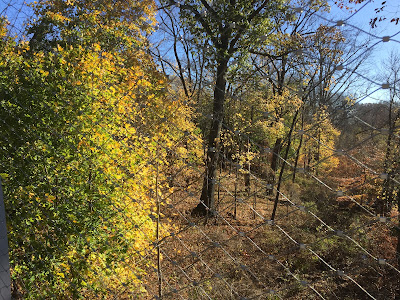 Here, viewed from the Streicker Bridge over Washington Road a week or two ago, are Norway Maples pushing up into the canopy of mature native oaks, beech, and blackgum, some of which are two centuries old. 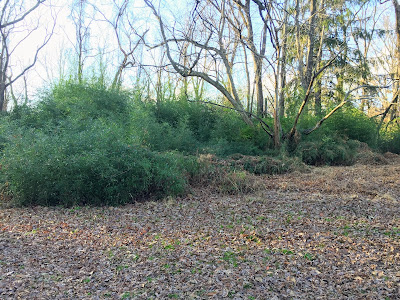 Bamboo at the Princeton Battlefield, bordering the Institute lands, offers another variation on the theme. 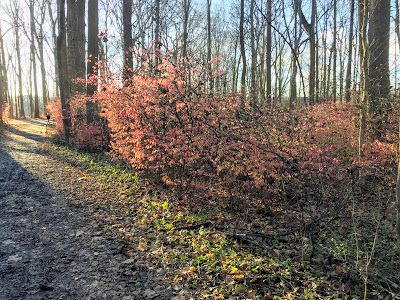 The different colors of the second forest provide a convenient code for easy long-distance identification. The pink here, down near the Friends Meeting House entrance to Institute Woods, means you're looking at winged euonymus. If it were growing in full sun, the color would be a vivid red, from which comes its other common name, burning bush. 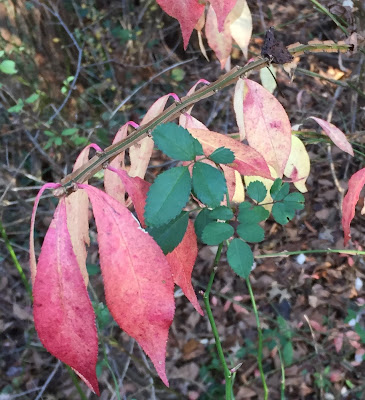 Here the pink of the winged euonymus mingles with the still green multiflora rose. 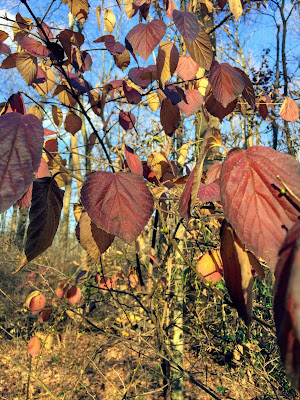 Linden viburnum has its own distinctive fall color, 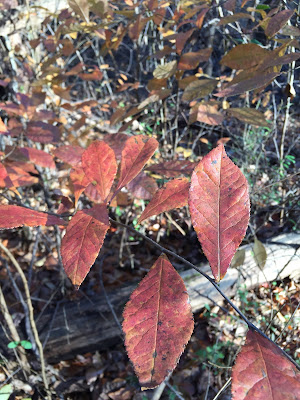 as does Asian photinia, whose leaves tend to be broader towards the tips. It's usually more golden than this photo shows, and in Mountain Lakes and along Princeton Pike has turned whole woodlands golden this time of year. 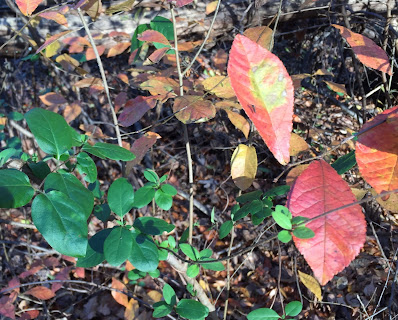 Mingling with the photinia here is the viny ever-green Japanese honeysuckle. 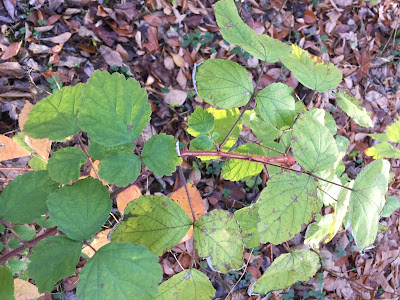 Wineberry, with its fuzzy purple stem, is another Asian species with lingering green in late fall. 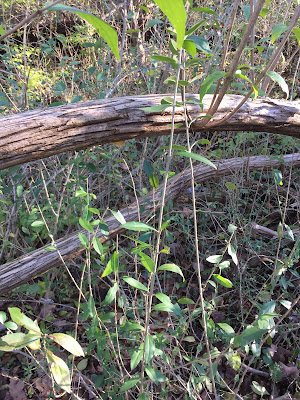 Privet holds onto its green as well, here growing up around the tan stem of a shrub honeysuckle.
Add global warming, which is bringing unusually warm and comfortable autumn days, and the feeling of gratitude for unseasonal warmth and color begins to  mix with a foreboding about the ecological consequences. Awareness creates an emotional undertow pulling against the uplifting effect of weather and color. The second forest flourishes in part because it is inedible to wildlife, which prefer and depend upon native species for food. The colors that greet our eyes this time of year signal a diminishing edibility for the forest's inhabitants. 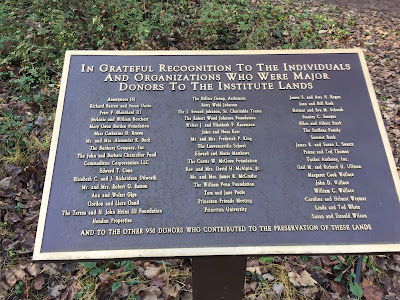 Four plaques tell the story of how the Institute Lands were saved from development in 1997, a half century after they were acquired. Though a couple key elements are left out--the Lenape Indians and Oswald Veblen--it is an extraordinary story, listing the major donors, 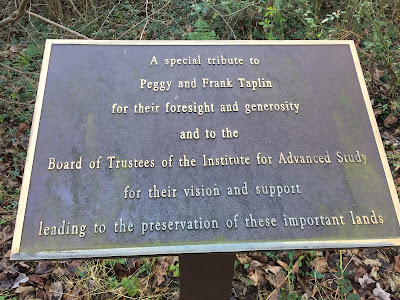 the Taplins who led the way, 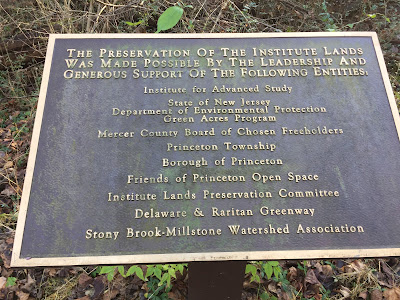 the coordination of governmental, institutional, and nonprofit entities that in NJ has been so effective in saving land.
You can click on each photo to hopefully make it large enough to read. 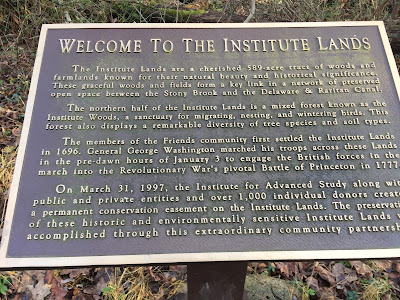 Here, on this plaque, would have been a good place to mention the Lenape Indians as early occupants and stewards. A whole additional plaque could be dedicated to telling of Oswald Veblen's role as primary instigator of acquisition. As partially told on the IAS website, and more fully told by George Dyson in a talk at DR Greenway, Veblen convinced the early Institute leadership to acquire the land, then did the legwork necessary to bring all the parcels together. Over ten years, beginning in 1936, Veblen laid the foundation for open space in Princeton, with the acquisition not only of the Institute lands but also the 100 acres on the east side of Princeton that he and his wife Elizabeth later donated as Princeton's and Mercer County's first nature preserve, Herrontown Woods.
It's interesting to look at the chronology of open space initiatives in the Princeton area. The Institute lands were acquired between 1936 and 1945. In 1949, the Stonybrook Millstone Watershed Association was formed. Around 1959 Herrontown Woods was officially opened. In 1969, the Friends of Princeton Open Space came into being. In 1989, the DR Greenway was formed. Whether there's meaning in the 20 year increments of their foundings, all three nonprofits played a role in purchasing from the IAS the conservation easement that now protects the Institute lands from development. 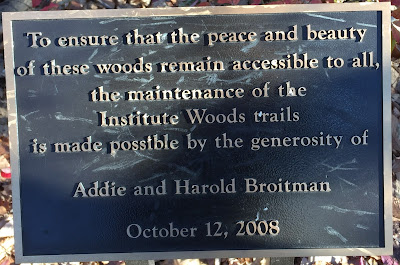 Preservation tends to be celebrated more than management, so it's good to see there's a plaque celebrating maintenance, at least of the trails. The leadership and persistence needed to keep the woods accessible was first provided by Veblen, then later by mathematician Paul Dirac, then still later by what appears to be lasting funding in 2008 provided by Addie and Harold Broitman.
Though the land is preserved, and the trails continue to be kept clear, and the richness of the Institute Woods has been researched and documented by Henry Horn and others, there is still a missing element for insuring the Institute Woods' longterm health. It's not clear that the woods hold the same biological richness seen in Veblen's time, or even Henry Horn's. With habitat restoration and deer management, we might lose the colors of the second forest, but gain a second preservation, this time saving the flora and fauna not from developers but from ecological imbalance and attrition of native species over time.
The first preservation, in 1997, prevented intentional alteration of the woods by developers. But the woods is still being altered indirectly, unintentionally, through the invasion of introduced species and the banishing of predators that once kept deer numbers in check. The second preservation takes responsibility for the unintentional changes humanity has unleashed, and requires us to be active and informed participants in the forest's ecology. Clearing the invasive species that crowd the forest, and reducing the intense browsing pressure of deer, would begin to bring back the lovely vistas and sweeps of wildflowers that surely helped inspire the community investment in saving the land more than twenty years ago.
Posted by Steve Hiltner at Saturday, November 28, 2020