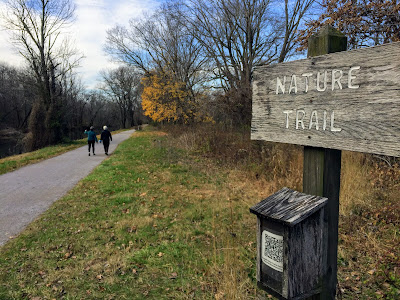 A walk along the towpaths's nature trail loop near Harrison Street a couple weeks ago had an unexpectedly uplifting effect on my spirit. Nature has played a big role this year in keeping people emotionally afloat through the pandemic, and even as nature shifts towards dormancy I felt gratitude for the patterns and small bits of color it still offered.
The trail is not as wide as it was in years past, since there's been a breakdown in who is responsible for mowing, but foot traffic has kept it open. Just by walking along it, you do the trail a favor. 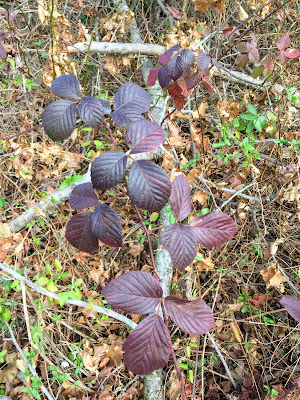 A splash of burgundy from a blackberry. 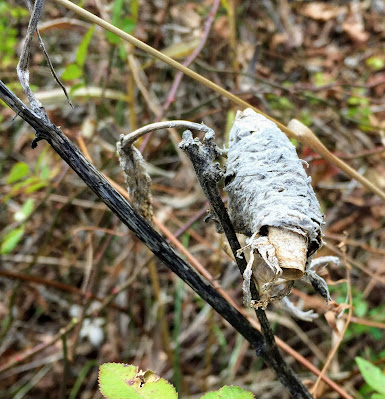 The remnants of a common milkweed's seedpod. 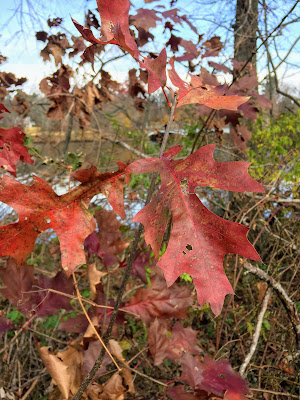 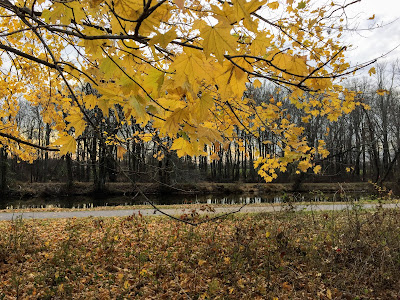 Bright yellow of a solitary Norway maple. Gratefully, Norway maples haven't invaded natural areas in Princeton for the most part, though they do tend to take over along fencelines in people's backyards. 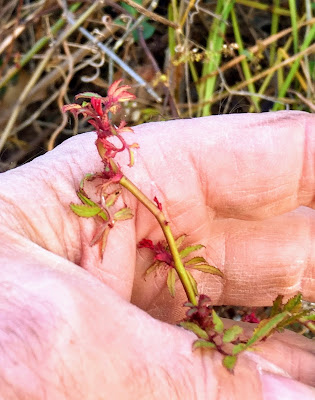 The stunted red leaves of a multiflora rose afflicted with rose rosette disease. For those of us who have had lots of run-ins with multiflora rose's barbed thorns, a little help from a disease to curb the aggressiveness of this shrub is good news. 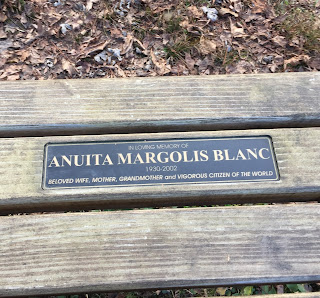 Along the shore next to this memorial bench are some plants I always check out. 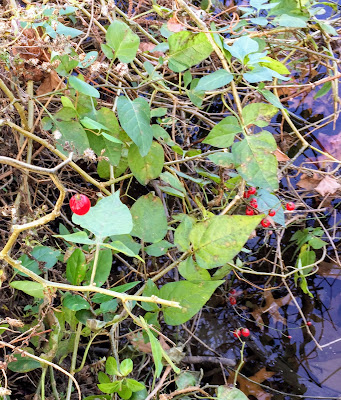 Looks like the nightshade had a good year. It's related to tomatoes, but don't eat the berries. 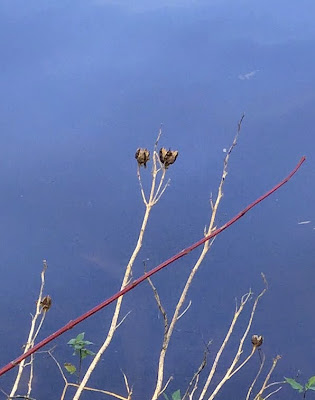 The seeds of native Hibiscus are held suspended over Lake Carnegie in cup-like capsules. Its preferred habitat is the banks of streams, but it flourishes in a garden if there's enough sun. 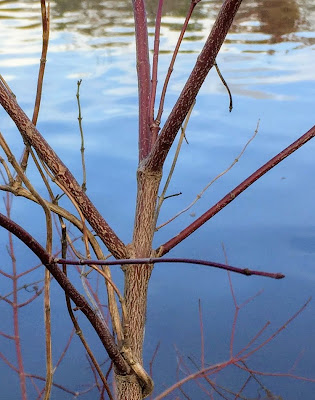 Of the many shrub dogwoods adapted to wet ground, silky dogwood is the one found locally. It's less red than red osier dogwoods. 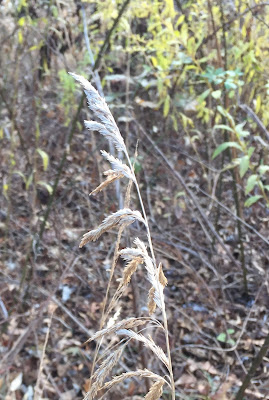 Even botanists can find grasses intimidating, but if you steer clear of the giant tomes with mind-boggling plant keys, and simply take note of their shapes and colors, the more common ones can be easily learned. It's like recognizing someone from a distance by the way they walk, even if their back is turned. Plants have body language that can be learned.
Wood reed is a common native grass in shady lowlands. 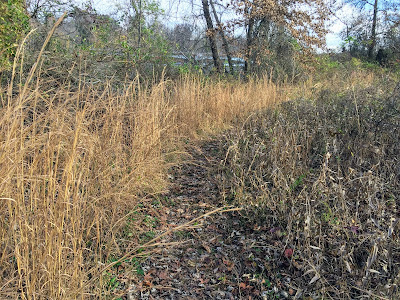 Broomsedge--it's a grass, not a sedge--takes on a nice bronze look in the fall. 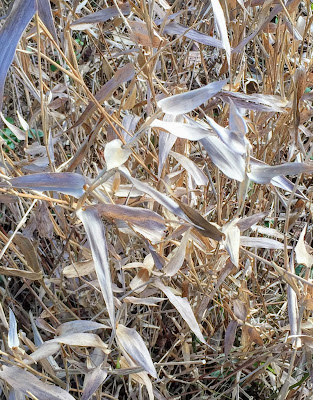 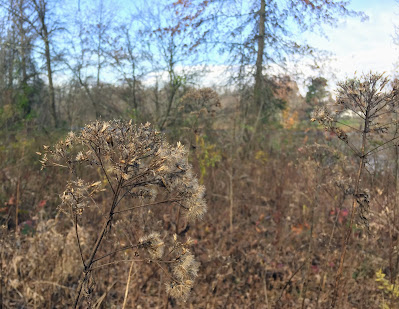 Where the trail takes a sharp meander there's a wonderful gathering of hollow-stemmed Joe-Pye-Weed growing in the open shade of giant oaks. A few seeds still cling to their tops, taking the mind backwards to the bright flowers of July, and forwards towards new plants to come.
We're used to seeing a sharp division between open fields and dense forests where little ground vegetation can survive. What's special about this nature trail is that trees are more scattered, allowing sun-loving wildflowers to flourish underneath. This savanna-like habitat would have been much more common in the past, when trees were harvested more selectively, or fires were allowed to sweep through, killing some trees and leaving others to grow. In the more recent past, the state parks crews would mow this habitat once a year in late winter to limit woody growth, but the past few years I haven't had luck getting it done. The strategic, episodic maintenance needs of native habitats, e.g. mowing once a year, seem harder to integrate into maintenance crews' schedules than the recurrent once-a-week mowing regimes that are far more expensive but can be routinized. 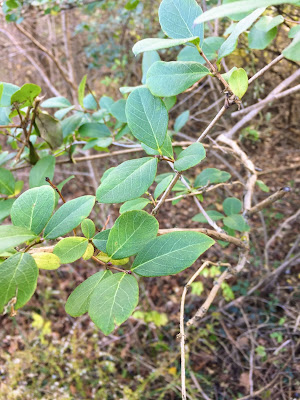 There were some ornamental plantings done long ago, probably in the 1960s, and some of these persist. A row of fragrant honeysuckle makes super-fragrant little white flowers in February. Though other shrub honeysuckle species are invasive, I've never seen Lonicera fragrantissima spread beyond where it's planted. 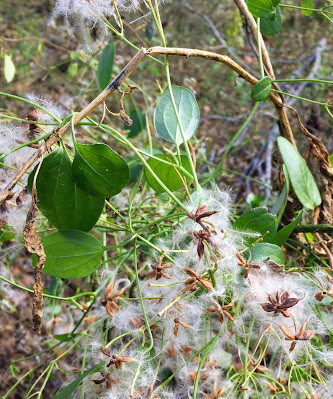 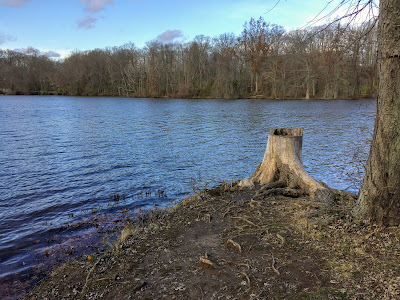 Take the short stub trail to the lake and you find a stump suspended partway out over the water on a tangle of roots. This is the remains of a sweetgum tree that used to serve as a roost for dozens of cormorants. The site was impressive and haunting at the same time. The tree finally succumbed, whether from erosion of its roots by the lake, too much fertilizer from the birds, or some other cause. Not sure where the cormorants went. 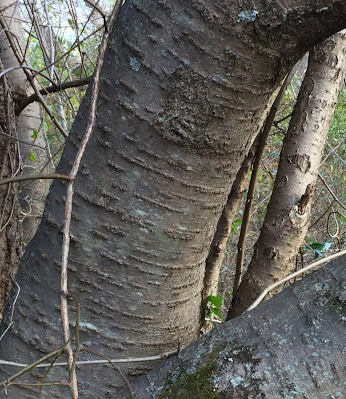 Those horizontal lines in the bark are the prominent lenticels of an ornamental cherry tree. 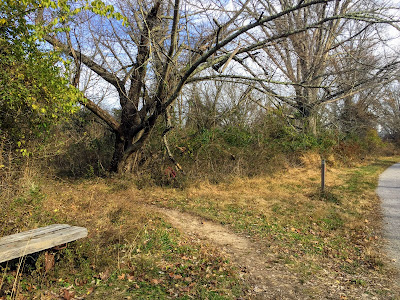 These giant ornamental cherry trees, evocative of the cherries in Washington, DC, remain from the university's plantings long ago. This one marks the western entrance to the loop trail, closer to Washington Road.
Learn to identify some plants, and even a walk through the stripped down nature of late fall can stir an energizing mix of recognition, memories and anticipations.
Posted by Steve Hiltner at Thursday, December 10, 2020