Diggings in the Lawn

Earlier in the fall my friend Gail reported that her backyard was getting torn up this year--something that had never happened before. One interesting  clue as to why this was happening now and not before was the death of three ash trees just across the fenceline in the neighbor's yard. This year, multiple experiences have made clear for me the dramatic impact active trees have on soil moisture. Trails at Herrontown Woods dried up as soon as the trees and shrubs leafed out and began drawing moisture from the ground. The death of many ash trees in Princeton is changing soil conditions, allowing sun to warm the ground and water from rains to remain in the soil longer. The dead tree roots are also a food source for underground organisms.

I claim no expertise on which animal is doing the damage, nor on how to stop them. Here's an organic approach. The internet puts the blame mostly on raccoons and foxes, as they search for grubs and earthworms. Both have upped their game in Princeton in recent years. That, along with heavier rains, warmer weather, and the loss of trees could be leading to more digging. Skunks also dig, but are more precise in their digging, making smaller holes that limit damage to the lawn. The photo below is from another homeowner's lawn near my house. This damage was noticed only a couple weeks ago, late in the fall. 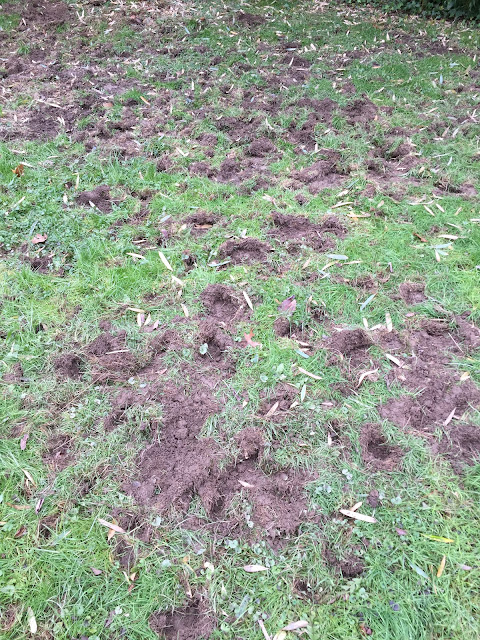