When my daughters suggested a walk in the sourlands, I took it as an opportunity to test out a theory: that Herrontown Woods is in some ways a miniature version of the sourlands preserve. 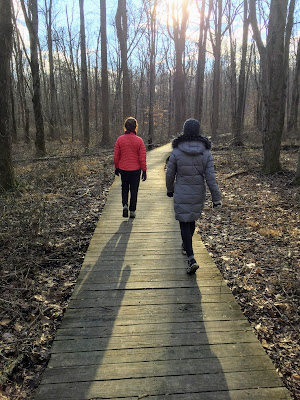 The trails are certainly larger, wider, longer than those at Herrontown Woods, with sections of broad boardwalk between stretches of familiar mud. 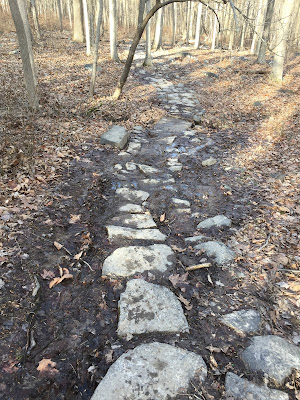 Some things are of similar scale. Familiar at Herrontown and the Sourlands are efforts to aid hikers through muddy patches with dense gatherings of stepping stones, 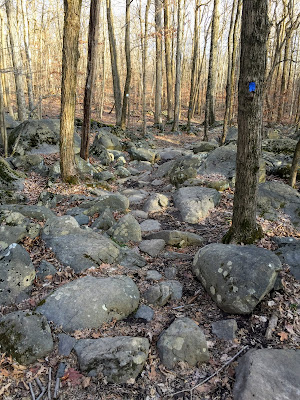 and places where the rocky landscape threatens to swallow the trail whole with its boulders. 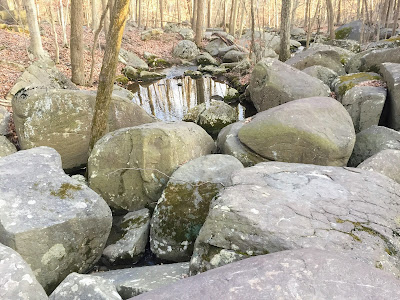 Whereas Herrontown Woods has its boulder field, beneath and through which a gentle stream flows, making a kind of stereo music in the spring, the Sourlands has Roaring Rocks, named for the spring rush of water beneath super-sized boulders. 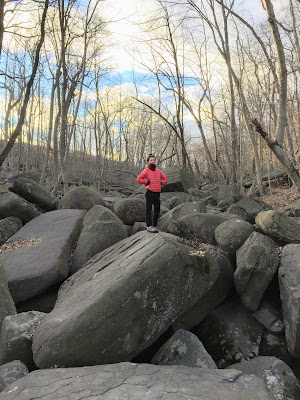 My daughter provided scale for the jumble of giants spilling down the valley. 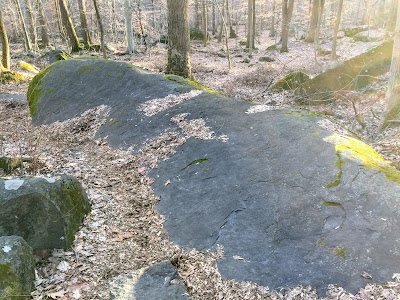 This long, smooth boulder, like a whale surfacing for air,  is an outsized version of a similarly shaped boulder that surfaces near the Veblen Cottage in Herrontown Woods. 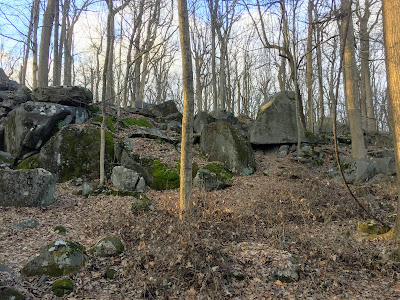 This rock face, too, is a larger version of a prominent geologic feature at Herrontown Woods, 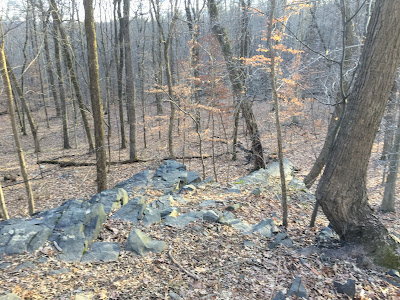 with a higher, longer view from above. 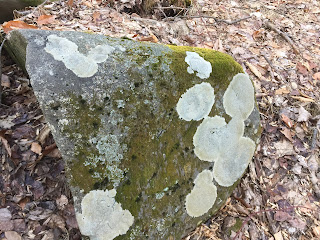 There's a familar play of lichens and mosses on the boulders, 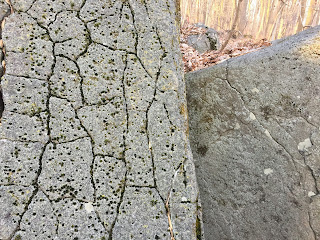 and a familiar mix of smooth and finely fissured rocks.
These boulders, by the way, are not a legacy of glaciers, which did not extend this far down, but of igneous upwellings exposed by subsequent erosion of the surrounding, less resistant material. Probably not a source of pride, but the Sourlands even has its own derelict fence, newer and longer than the one at Herrontown Woods. Something there is in a woods that doesn't love a fence. 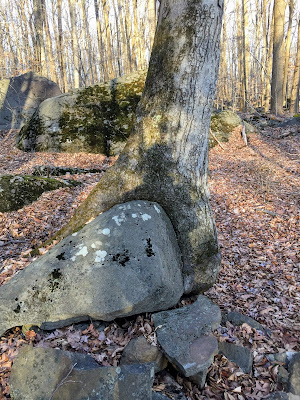 The Sourlands probably has more examples of trees perched on boulders, if anyone were to count. 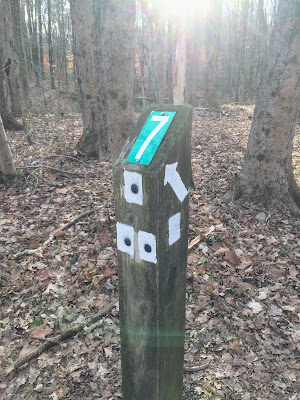 It took awhile to figure out the Sourlands' system of trail markers. 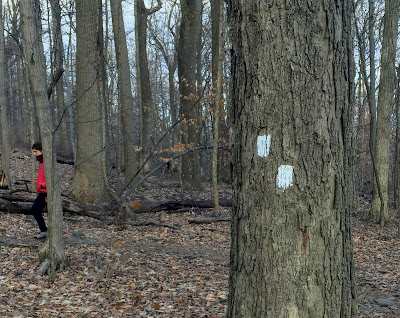 A half hour in, my younger daughter had a useful insight, that these two angled squares mean that the trail is about to turn left. 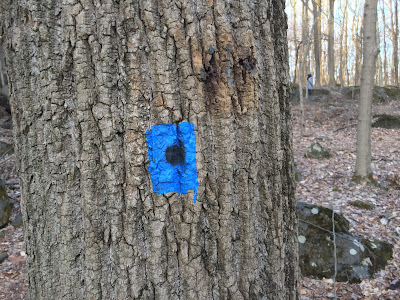 Where the blue trail splits in two, one of the routes carries a black dot in the middle. Pretty clever. 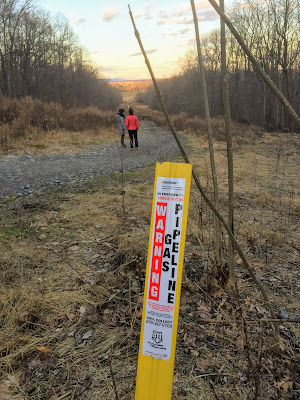 The gas pipeline right of way at the Sourlands is steeper, with a more dramatic view than the one at Herrontown Woods. My daughters pointed into the distance, where the Manhattan skyline was clearly visible. That was a surprise. 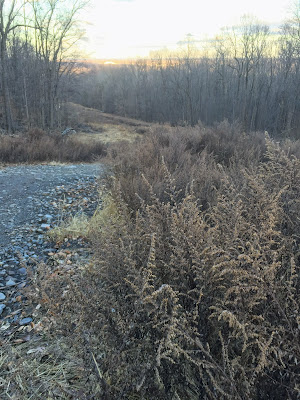 As at Herrontown Woods, the Sourlands pipeline is a mixed bag of invasive mugwort, 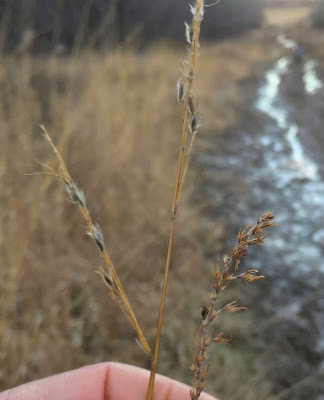 and chinese bushclover, with some native species like Indian grass and tickseed sunflower mixed in. Whenever I walk one of these right of ways, I think of Leslie Sauer's The Once and Future Forest: A Guide to Forest Restoration Strategies. Therein, read long ago, she made the point that these linear openings have a different ecological impact from the small, isolated, more circular forest openings that would naturally be created by fallen trees or fire. The linear corridor facilitates the spread of invasive plants and the parasitic cowbird in ways that natural, disconnected openings do not. 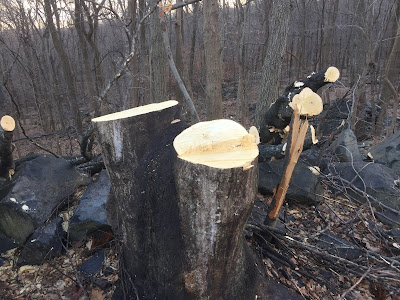 One of the invasive plants spreading along the edge of the pipeline corridor is Ailanthus, or Tree of Heaven. The Ailanthus has in turn been expediting the spread of the newly arrived invasive insect, the spotted lanternfly. Cutting and treating Ailanthus--a favorite host of the lanternfly--is a way of discouraging both of these introduced species. 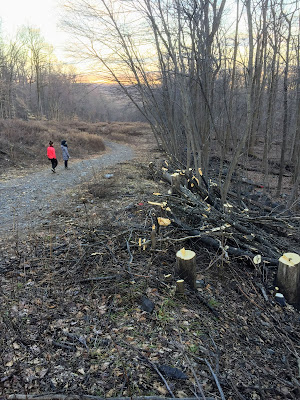 Sometimes smaller is better, as in Herrontown Woods' smaller problem with Ailanthus, and its smaller population of deer (thanks to the more intense management Princeton has been able to sustain), which reduces browsing pressure on native species. 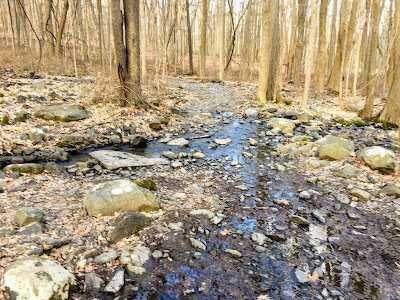 One of my favorite features at the Sourlands are these very shallow stream crossings, where there's no distinct stream channel. The water becomes like us, just one more traveler over stones, and we become like the water.
The Sourland Mountain Preserve is ten miles from Princeton. Drive up 206 and take a left on Belle Mead Blawenburg Road. 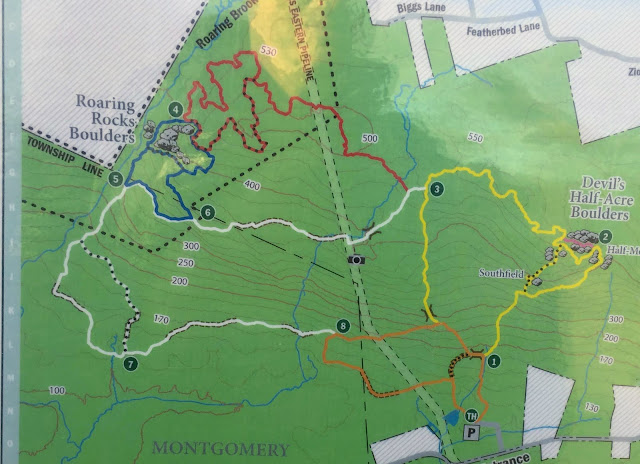 Email ThisBlogThis!Share to TwitterShare to FacebookShare to Pinterest
Labels: Places To Visit, Trails