This past Thursday, March 18, I received a phone call from Fairfax Hutter with news that the amphibians would be migrating that night. A long spell of dry weather had held the frogs and salamanders back. Now, with rain and temperatures in the 40s, they would be moving in large numbers towards vernal pools to breed. Fairfax was headed out to the Howell History Farm area to protect amphibians crossing the road, but she was hoping I could grab a reflective vest and flashlight and walk along Herrontown Road. Directing traffic would have required coordination with the police, and lacking the necessary equipment, I didn't get out there until Saturday morning, to see if what sort of traffic control could be warranted in the future. 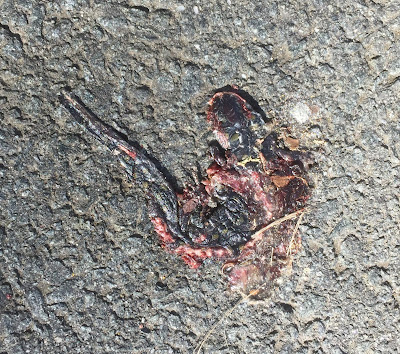 The photos I took were reminiscent of the snapshots in Chris Jordon's documentary "Albatross," of birds killed by an accumulation of plastic in their guts. 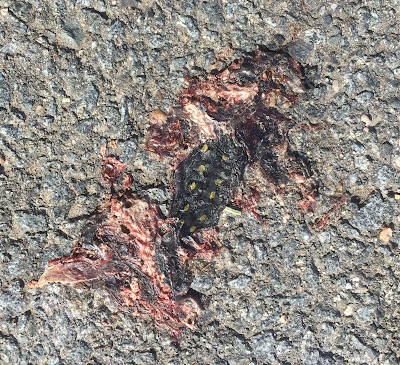 No driver means to kill a spotted salamander, and no one wishes plastic waste to ultimately kill an albatross. So much of the damage we do is inadvertent, free of ill intent. Climate change and plastics pollution are a giant, collective "Oops!" 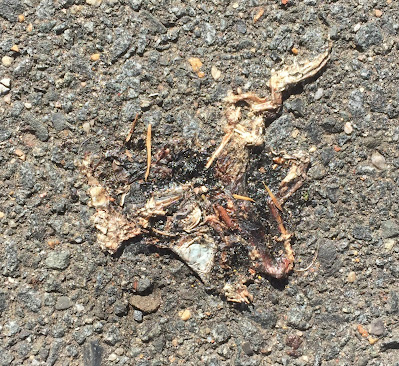 The number of roadkilled amphibians between the Autumn Hill Reservation parking lot and Stone Hill Church came to ten. The death toll would rise with additional cars passing by. One fascinating aspect of population is that, as the number of people increases, the behavior of each individual becomes more important even as the individual feels less and less responsible for the collective impact.
Predictions of future carnage need to factor in the increased traffic generated by a recovering economy. If the 90 acre Landwin tract on Herrontown Road were to be developed, the combination of lost habitat and more traffic would not bode well for the spotted salamanders, which Fairfax says are about to be listed as an NJ species of state concern. 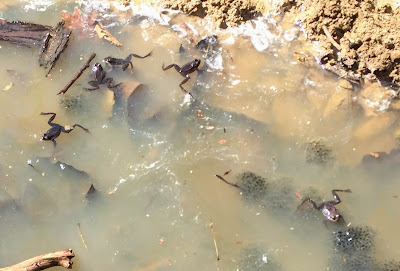 Meamwhile, the frog-filled vernal pools near the Herrontown Woods parking lot were drawing a lot of attention from kids passing by on the trail. Fairfax said she had documented a record night along the stretch of road where she had played the role of crossing guard, with 98 crossings
In Princeton, as far as I know, there has been no effort to protect amphibians crossing roads in the spring. Here, at least, is some evidence to spur better preparedness for migrations to come.
Posted by Steve Hiltner at Sunday, March 21, 2021