Here are some encounters with unusual trees in Princeton. In the Institute Woods, we saw a couple beech trees some distance from a trail and took a closer look. Not quite the California redwood that people could once drive a car through, but similar in concept. 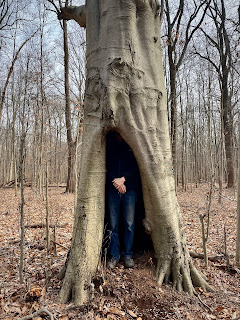 Another beech nearby was harder to pose with. 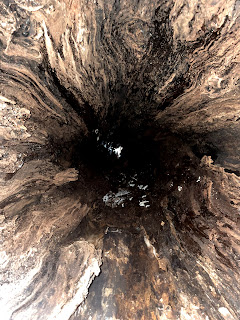 The view up the inside of the trunk. 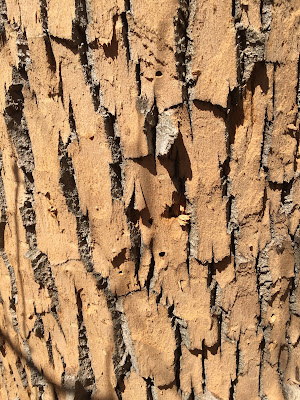 Bark with this shaved appearance, seen recently in a deep forest in northeastern Princeton, is called "ash blonding," said to happen when woodpeckers go after the emerald ash borers inside the ash tree. Note the tell-tale "D"-shaped holes where the borers exit. 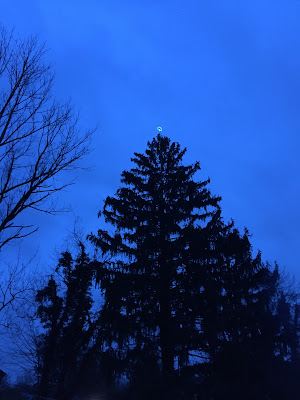 More uplifting was this tall spruce, which during the holidays sports a shining star, which then gets replaced on the owner's March 17 birthday 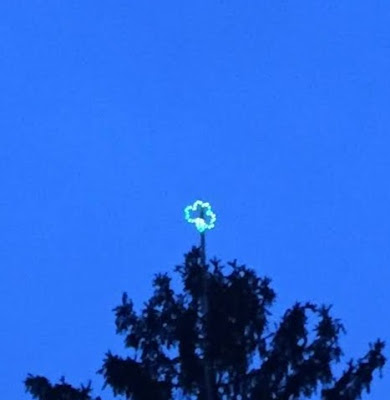 by an Irish clover. 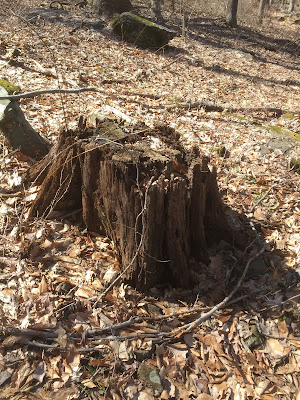 Here's an odd sighting. It looks like an ordinary stump, but the tree was clearly cut down and removed. The forest is quite old, so the logging must have been long ago. My guess is that it's the stump of a chestnut tree harvested a century ago. One of the many wonderful traits of the native chestnut, lost to an introduced disease a century ago, was its resistance to decay. Working briefly for a forester in Massachusetts in the 1970s, I saw whole logs of fallen chestnuts still intact despite the passage of many decades. I'm ready to be wrong on this ID, but that's what I'm going with for now. 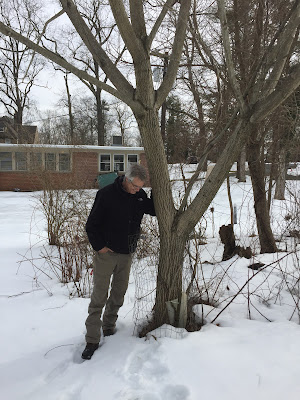 A month ago, I stopped by the TRI property to check up on a couple native butternuts planted there by Bill Sachs. The two trees are flourishing except for some vines that I really need to get back there and cut. They were planted close to where Bill and I harvested about fifty nuts, perhaps the last native butternut harvest in town before the bounteous tree was blown down in a storm. Thanks to Bill, the harvest turned into many saplings that we've planted in many locations in town, including Harrison Street Park, Herrontown Woods, Mountain Lakes, Stone Hill Church, and TRI. The tree has a gangly growth form, but the nuts are said to be delicious. The tree needs our help because of an introduced disease that has laid it low. This one's look really healthy thus far.
Some other stories about unusual trees:
How lightning that struck one tree at Morven actually killed the adjacent tree instead.
An extraordinary giant white pine that may still grow near 206.
Posted by Steve Hiltner at Thursday, March 25, 2021