The Long Evolution of Deer Hunting in Princeton 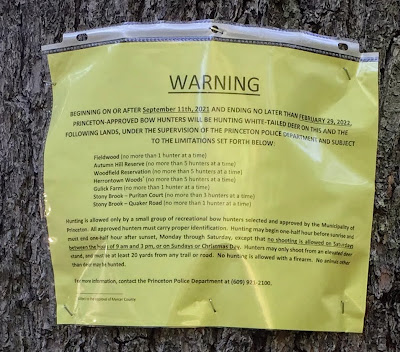 Most hikers in Princeton have by now encountered warning signs posted at various preserves, giving notice that it's bow hunting season. The season runs from September to February, and is limited to a select group of skilled hunters vetted by the town. They use elevated deer blinds located away from trails, so there should be no risk of errant arrows. The warning is useful for encouraging people to keep themselves and their dogs on the trails.
Hunting is not allowed on Sundays, and also now is not allowed on Saturdays from 10-2. More info at this link. For those in the Riverside neighborhood, there's also info online about hunting at the University-owned Butler Tract.
As a botanist helping to manage habitats in Princeton, I cannot emphasize enough how important it is to manage the deer population. The deer prefer to eat native plant species, and too many deer leads to a decimation of the native flora. Into the void come nonnative plant species--stiltgrass, honeysuckle, winged euonymus, privet, etc.--that the deer reject. Over time, Princeton's preserved lands become increasingly inedible to the very wildlife  the land is intended to sustain.
A 2018 article in NJ.com summarizes the dilemma. It mentions how Princeton gained national attention when passionate protests arose soon after the township hired professional hunters in 2000. Amateur hunting had not proved sufficient. An ecologist is quoted in the paper, raising the central point that the biggest human intervention was not hunting, but instead the extirpation of predators like wolves and cougars. Then, when deer hunting was also banned in 1972, the deer population began to explode.
The resulting imbalance is analogous to what Rachel Carson describes when reckless use of pesticides began wiping out the predators that had until then held insect numbers in balance. She describes predators as "critically important," because they contribute to the "resistance of the environment" that helps keep populations in check. She also speaks of the "truly explosive power of a species to reproduce once the resistance of the environment has been weakened." High numbers of deer are due less to having been displaced from their traditional habitat than simply through their capacity to reproduce, and a lack of checks that would otherwise keep them in balance with the carrying capacity of the land.
Unless people want to bring back predators like wolves and cougars, it is up to us to fill the void in predators we ourselves have created.
The traumatic learning curve Princeton has gone through over the past 20 years is analogous to what the great conservationist Aldo Leopold experienced a century ago. Born in 1887, Leopold earned a forestry degree and was soon writing management plans for preserved federal lands out west. An extraordinary documentary of his life and legacy, Green Fire, tells of how he at first believed that killing wolves and other predators out west would create a hunter's paradise. Instead, the absence of predators led to severe habitat degradation as surging numbers of elk ate vegetation down to stubble.
Leopold was a contemporary of Oswald and Elizabeth Veblen, who donated Princeton's first nature preserve back in 1957, and I wondered if Leopold might have influenced the Veblens in their founding efforts to preserve land in town. Leopold bought the land in Wisconsin later made famous by his book, the Sand County Almanac, around the same time the Veblens were acquiring land in Princeton. The parallels caused me to search for Leopold's name in the fabulous online resource, Papers of Princeton.
What popped up was not a visit by Leopold to Princeton, but instead references to Leopold in past discussions about controlling deer numbers in town. In 1987--100 years after his birth--and again in 1998, Aldo Leopold's name is used to lend weight to arguments in favor of using hunting to bring down the burgeoning numbers of deer and related automobile accidents.
What we learn from this history is how long and hard the fight has been to get a town to collectively acknowledge truths that were known a century ago, and surely long before then by others possessing the knowledge and keen observation skills of an Aldo Leopold or a Rachel Carson.
Reading the 1987 article was also a chance to witness some of the dedicated environmentalists of Princeton in action. Tom Poole, whom I knew from working with the Friends of Rogers Refuge, stated at a township meeting:

"In my view it is much more humane to take a deer with a shotgun than with the bumper of a car," Mr. Poole remarked. He added that last August, the Animal Control Officer, Al Heavener, had to kill 23 wounded deer. "He nearly quit his job."

Elizabeth Hutter was another active environmentalist at that meeting, and "traced her feelings about deer, from joy at their proximity to tolerance at the damage, to "annoyance, frustration and anger."

A beautiful letter to the Town Topics, written by Tom Poole in 1998, shows how long has been the road to deer management based on ecological realities. He also mentions in passing the annoyance of leaf blowers, which is only now, 23 years later, beginning to be addressed. Even more extreme in the slowness of progress from awareness of a problem to action to solve it, the threat of climate change was first raised nationally in 1988, but scientists were aware of this most devastating of imbalances long before that, and still there is no coordinated action after all that time. Interestingly, climate change is stymying efforts to control deer populations, since mild winters make it harder to attract deer to feeding stations.

Any success we have at finally stirring action on long-festering problems owes thanks to those who were priming the pump decades ago.

Deer Are Serious Threat to Our Woods And Other Animals, Birds and Plants

To the Editor of Town Topics:
At a recent Princeton Township Committee meeting a state-supported, safety-first program to reduce the deer herd was a principal topic. A critic referred to the deer merely as a nuisance and painted the program as needless, cruel and heartless, a characterization one local paper chose to highlight.
Trivializing the problem by referring to the deer simply as a "nuisance" or an "annoyance" seriously misses the point, the ecological point of why so many of us — including at least one paper — favor reducing the deer herd to bring it into a proper balance with the environment. The deer are much more them a "nuisance"; they are a serious threat to the future of our woods and fields and other animals and birds that live there. The woods of the future will lack many desirable tree species because the deer are destroying today's saplings. Princeton Professor Henry S' Hom points out at the University's Stony Ford Center for Ecological Research that the only oak saplings which are now able to survive are those lucky enough to be growing through a thorny wild rose tangle. "Whitetails Are Changing Our Woodlands," an article in American Forest Magazine, echoes the alarm, "Unless we can achieve some form of sustained deer-herd reduction, our forests will continue to undergo a permanent change for the worse. We're losing options with each passing year as deer eliminate species after species."

As the deer take away the understory in our woods, ground dwelling species are disappearing. The towhee is a lovely, cheerful bird that feeds and nests on the ground. Once quite common in local woods, it Is very scarce now around here. Ovenbirds, which also spend much of their time on the ground, pass through In the spring, but few pairs stay to nest now because ground cover has dwindled. Some observers maintain that pheasants, once common, have disappeared from this area because the deer stripped away their cover.
We've been talking about this for a long time. Beryl Robichaud Collins, then a Rutgers Ecologist and still a Township resident, spoke to the Township Committee in 1987 and emphasized that the "carrying capacity" of an area is the maximum number of deer that can be supported without damage to the environment. She cited numerous observations of significant damage by deer in the flood plains, the woods and in gardens because the herd had even then vastly exceeded its carrying capacity. Twenty per square mile is considered ideal.
The esteemed environmentalist Aldo Leopold died exactly 50 years ago. Even that long ago he talked about the long-term negative effects of too many deer, just what we're suffering here now. In his Sand County Almanac he wrote, "I now suspect that just as a deer herd lives in mortal fear of its wolves, so does a mountain live in mortal fear of its deer. And perhaps with better cause, for while a buck pulled down by wolves can be replaced in two or three years, a range pulled down by too many deer may fail of replacement in as many decades."
Beyond their impact on other species we see the effects of the deer in many ways. A scientist studied the green slime on the lakes in the Township's Mountain Lakes Preserve and concluded that much of this was due to the unimpeded run-off of rain and what it carries because the overabundant deer have totally denuded the adjacent hillsides. Many people have fenced in portions of land to protect it from the deer. Inside the fencing saplings, bushes and other components of the underbrush flourish. Outside the deer virtually destroy it all.
The difference is profound. And the difference is critical to future vegetation and wildlife. This is not a new problem but the current Initiative is a new one and offers a bright opportunity to significantly affect the size of the herd and reduce the damage the deer are doing to our environment. That's what this discussion is all about. It's not about a mere "nuisance" like mosquitoes or crabgrass or the fortissimo of leaf-blowers.
Just imagine the outrage and demands for swift action if the overpopulation was a less fetching species: rats, skunks, or groundhogs. Ironically, such overpopulation, while unpleasant would, in all probability, be less damaging than our present deer herd. But rats, skunks, groundhogs and the like have natural enemies which can keep them in some kind of balance. The deer no longer have natural enemies here.
The deer, of course, affect us in many other ways. They are responsible for at least 300 car accidents in Princeton Township alone each year, probably many more which go unreported. They consume expensive shrubs and other plantings, less expensive annuals and perennials. They play a major role in the spread of crippling Lyme disease.
I urge everyone who loves woods and fields and all the creatures that live there to actively support the Township Committee, the Environmental Commission and the Wildlife Committee, of which I am a member, in this promising effort to reduce the deer herd safely and return some semblance of balance to the local environment. THOMAS M. POOLE Mason Drive