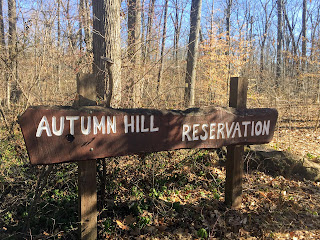 Perched on the Princeton Ridge and yet standing in the shadow of better known preserves is Autumn Hill Reservation. When the Friends of Herrontown Woods formed in 2013 to reopen long-neglected trails at Herrontown Woods, we adopted Autumn Hill Reservation as well, which was in a similar state just across Herrontown Road. By "we" I mean largely Kurt and Sally Tazelaar, who did most of the much-needed trail work, with periodic help from the rest of us.
Large expanses of the Autumn Hill preserve reflect a common condition of central NJ woodlands, with native trees above and invasive shrubs massed below. But there are some memorable spots that attract hikers: the large, flat, butterfly-shaped rock that once had a wonderful view out across the valley, and the charismatic wreck that I believe someone told me was an abandoned ambulance from the 30s or 40s. 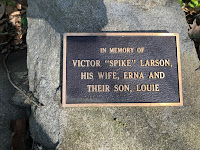 That was part of a squatter's homestead commemorated by a plaque on one of the boulders,
and Kurt and I found the foundation of another homestead dating back even further. Native wildflowers become more numerous as one heads to the back of the preserve, which with other publicly owned lands extends to River Road, creating an unbroken corridor of open space all the way down to the Millstone River. 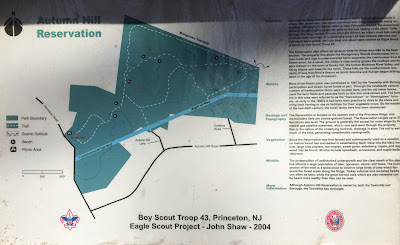 There's still evidence of a previous pulse of energy put into the Autumn Hill preserve--an Eagle Scout project by John Shaw in 2004 commemorated in this sign at the entrance. Probably arborist Bob Wells, who was very involved with scouting, had something to do with the project.
Some of Autumn Hill Reservation's deeper history came to light more recently, after Robert von Zumbusch of the Friends of Princeton Open Space contacted me, asking if I'd ever heard of Helen Hunt and the Friends of Autumn Hill Reservation. I hadn't but was quickly able to get an answer for Robert by doing keyword searches at the super-helpful Papers of Princeton website, where Princeton newspapers are digitized dating back to the 19th century.
Up popped an article from April, 1998 about a series of nature walks being organized for Earth Day by the Princeton Environmental Commission. It was like a Who's Who of Princeton environmentalists, with nature walks being led by Henry and Betty Horn at Mountain Lakes, Tom Poole at Rogers Refuge, and Bob Wells at Herrontown Woods. Additional walks with Nicholas Carnevale and friends at Pettoranello Gardens, and John Mills at the Princeton Battlefield were also planned.
And there was Helen Hunt, leading a walk at Autumn Hill, where "trails have been resurfaced, widened, and extended down to the great rock overlook. Work has been progressing all winter." Clearly, Autumn Hill received a good pulse of stewardship energy back in 1997-98. Conveniently, the article included a phone number to contact her. Though knowing that most land lines are dead ends these days, I gave the number a try, left a message, and soon was talking to Helen about her initiative back then.
Helen said she briefly led a group called Friends of Autumn Hill Reservation, back in the late 90s. The group wasn't much more than her and Bob Wells, whom she paid to expand the trails by helping him buy a machine for the purpose. Her main interest was to have an off-road alternative for jogging--a smaller version of the towpath. The trails were wider than normal hiking trails, but it was hard to get them smooth enough for jogging. Once the trails were made, the group didn't go much beyond that.
Further delving into the time machine that is Papers of Princeton reveals snapshots of Autumn Hill's history that extend back from 1998.

An early presence out Autumn Hill way, east and south of the present day preserve, was Camp Tamarack, the 30 acre Girls Scout camping ground  that dates back to 1948. Remnants of a foundation and outhouse can still be found by following an old abandoned trail down from the end of Autumn Hill Road--a deadend street that was built as part of a subdivision in 1956. Girlscouts would camp there on weekends, sometimes combining the camping with sailing on Carnegie Lake.

A 1966 article announces obliquely that Township Open Space Commission "has obtained use of the Autumn Hill Reservation," and in 1969 the preserve is described as "new", with a parking lot but trails not fully laid out. The sign on the kiosk says that most of the land was acquired in 1967, with funding from township, borough, and the state's Green Acres fund.
The 1970s, which began with the first Earthday, brought a new level of accessibility for the preserve, this time thanks to the YMCA Rangers, as reported in 1972:

"Autumn Hill" is the newest of the Open Space lands in terms of a good loop trail you can follow. The trail was built by YMCA Rangers. Picnicking is invited in Autumn Hill, too, and later this spring, there will be picnic tables. Right now, there is drinking water and you can bring your own picnic lunch.

In 1984, a big battle raged to fend off a proposed road, Route 92, that would have destroyed large swaths of open space, including part of Autumn Hill Reservation.

Fast forward to 1995, when local arborist Bob Wells proposed to officially adopt Autumn Hill Reservation. Bob was renting the nearby Veblen House from the county at the time.

Committee accepted an offer from Robert Wells that his tree and landscape firm adopt the park at Autumn Hill Reservation off Herrontown Road. Mr. Wells, chair of the Township Shade Tree commission and a Herrontown Road resident, has performed extensive tree and trail maintenance in the park on a volunteer basis over the past several years. He also supervised the creation of one trail that was an Eagle Scout project. He now proposes to reestablish the picnic area off the parking lot, rebuild the frost-free water spigot and erect an additional foot-bridge. He also plans to install tree identification signs and a trail map and do general maintenance to the trails and path system. In accepting the offer, Township Committee signaled it was launching an "adopt-a-park" program to enable other businesses and individuals to volunteer their services for Township parks.

There's been an increase in interest in Autumn Hill recently, particularly from people living on the other side of the ridge in Montgomery who would like a better connection to the preserve from that side. Though we've done some small reroutes of trails onto drier ground, there is more we hope to do this year, laying boardwalk and shifting some trails to drier ground.

Winter is a good time to look for better routes for trails. Andrew Thornton and I recently noticed a potential improvement that would run along the edge of a stone wall currently hidden by densely growing honeysuckle, winged euonymus, Asian photinia, barberry, and privet. The nonnative shrubs flourish because deer and other wildlife don't eat them. I made some headway one afternoon, cutting through the thicket with loppers and a saw, constantly dodging the thorns of multiflora rose. Who's to say what the dominant motivation is. Love of a good trail? A desire to leave the world a better place than one found it? The satisfaction of work where progress is clear? A stewardship ethic engrained from youth? One strong motivation is the standing water that makes the current trail route nearly impassable this time of year. Rerouting the trail along higher ground, next to a rock wall, will give us a trail that's both drier and more interesting. Win-wins help to spur one on.

Looking back through time, it can be heartening to see how people in the past stepped up to take care of public lands, just as we do now. It can also be unsettling, though, to see that periods of care do not always last, and can be followed by periods when trails slowly return to thicket, awaiting the next inspired steward to come along. What makes us think current efforts will be any different? That "adopt a park" program started in 1995 was well-intentioned, but the groups that stuck with it after the first flush of interest are few.

During my Durham days, I started a program in which interested neighbors could adopt 20 feet of a paved bike trail that went through a nature preserve. The aim was for each family or individual to gain a sense of ownership of a small section of trailside vegetation, planting native plants and weeding occasionally, until the entire length of trail would be a verdant showcase for sedges, rushes and wildflowers. There was early interest, but most people didn't stick with it. What I learned is how few people are hardwired to garden, and even fewer hardwired to garden in a public space.

Back in 1973, recycling was in a similar "heroic" stage, with a few dedicated volunteers trying to divert newspapers, bottles and tin cans from the waste stream. Like many municipalities across the country, Princeton was grappling with how to "get recycling out of the garage and volunteer stage and into the solid waste volume reduction and resource recovery stage on a long term regional basis." I was part of that 70's era volunteer recycling stage as well, standing on a flatbed truck as we drove through a neighborhood, stacking homeowners' bundled newspapers on the truck, and crushing glass--brown, green, and clear--in oil drums, as part of a pilot curbside recycling program in Ann Arbor, MI. Curbside recycling ultimately became institutionalized, but stewardship of open space is still in the "catch as catch can" volunteer stage.

Postscript: There's another question that lingers from this dive into history: Where is that water spigot from which drinking water once flowed in Autumn Hill Reservation? 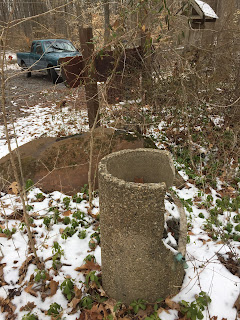 PostPostscript: Didn't take long to find the old water spigot, just a few feet away from the parking lot.
Posted by Steve Hiltner at Friday, February 25, 2022