Weeds that Launch an Underground Insurgency

More discussion of weeds here, after happening to see a great example of a particular category of weed--three different ones afflicting three gardens all in a row. It's important to know your weeds, because as soon as you find a plant that you like enough to put in your garden, there will be weeds ready to grow up it and over it and all around it. Catch them early and they won't be a problem.
A point that cannot be overstated is that a garden designer need only know the intended plants. A gardener--the one who gets dirty day to day realizing and maintaining some vision--must know not only the intended plants but all the other ones that pop up. To leave or to pull, that is the question. Being able to identify weeds empowers the gardener to take action.
Many weeds will trick the inexperienced gardener. When first encountered, they may look pretty good, and seem pretty harmless, and so they get left to spread. Having gained advantage from our generosity, some of these deceptive weeds can become particularly tough customers, so that before you know it what could have been a small proactive pulling becomes a formidable task. 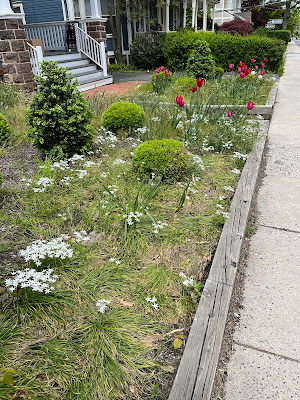 Take this scene on Wiggins--one of my favorite streets because the houses are close to the street, encouraging gardening rather than a large, and largely useless, lawn. (Doesn't it seem like, starting with suburbanization in the 1950s, yards got bigger as people's knowledge of plants got smaller?) There are at least four of these gardens that caught my eye as I was riding by on my bike. One of the gardens is essentially weed-free, but I could see that the others, though they look okay right now, are each plagued by an underground insurgency. 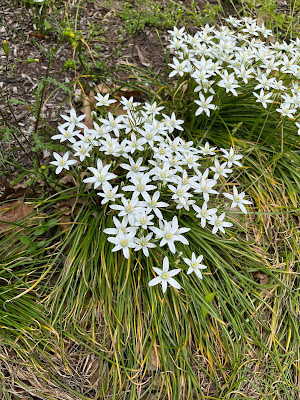 Star of Bethlehem -- This first example of a weed's takeover will be least convincing for the reader. The white flowers of Star of Bethlehem set off the red tulips nicely. But despite its pretty name and pretty flowers, Star of Bethlehem's capacity to spread through a garden and pop up in the lawn (along with wild garlic, it springs up early in the spring to form something I call "lawn blotch") has made it less than loved. 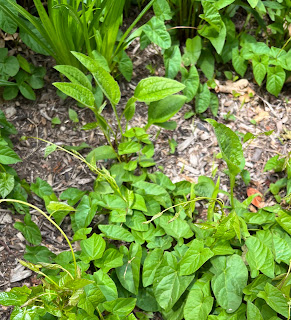 Bindweed -- Another garden has some standard ornamentals--iris, purple coneflowers--and what at first glance appears to be a nice groundcover. 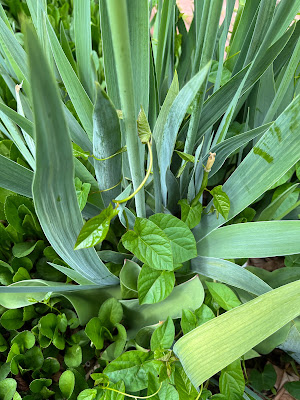 But that groundcover turns out to be bindweed. Firmly entrenched underground, it is just starting its quiet insurrection that will smother the garden as the season progresses. 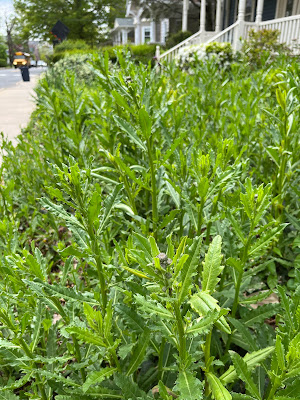 Canada thistle -- One side of the third garden has been completely taken over by Canada thistle, which might better be called spreading thistle, since it's from Europe rather than Canada. Many a garden and field has been invaded by this plant. 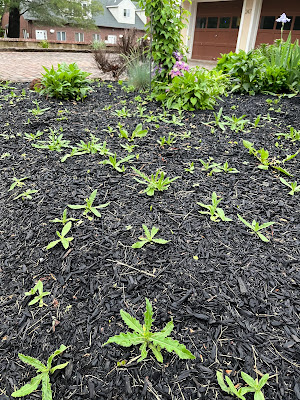 Here, for instance, is a garden where the landscapers spread that pretty black mulch that has become popular, but underground was a whole network of Canada thistle roots from which has sprung this year's crop. It will be impossible to garden this area.
Both bindweed and Canada thistle pull easily when the soil is moist, but that easy pulling is deceptive, as the underground root system remains undisturbed and ready to send up new shoots as soon as the gardener's attention turns elsewhere. A grasslike weed called nutsedge is also deceptively easy to pull. (Searching this blog for the word "nutsedge" pulls up some additional posts on weeds.)
Among the less common underground spreaders, in my own garden, I added two native vines--groundnut and Virgin's Bower (Clematis virginiana)--that have some wonderful qualities but turn out to be aggressive underground spreaders under sunny conditions. Autumn clematis--a nonnative very similar to Virgin's Bower--also can be super aggressive underground. And then there are the perennial sunflowers, and many kinds of mint. Native or not, they too establish large sprawling underground root systems that send up lots of new shoots the next year in places you really don't want them.
A satisfying garden, just like a satisfying habitat, is a conversation among many species of plants. I like to think of myself as a moderator, and though I have a general vision for how the "discussion" will go, I don't have the time or inclination to exert strict control. When one species of plant takes over, the feeling is much like someone who takes over a conversation. There's a narcissistic quality to an aggressive plant, a Me, Me, Me indifference to what other species have to contribute. Dominance by one species has ecological impacts as well. Loss of plant diversity strips a habitat of the progression of blooms that might otherwise sustain pollinators through the summer and feed a diversity of herbivores.
What to do about aggressive underground spreaders? Once can play a war of attrition, in which the vigilant gardener deprives the underground root system of energy by pulling all shoots as soon as they emerge. Over time, the root system, needing to continually burn energy in order to survive, exhausts itself for lack of energy inputs from above. Since vigilance is hard to maintain, a more sure approach is to lay cardboard over the whole thing, cover the cardboard with mulch, and wait a year.
Both of these approaches can help, but neither is very practical in most situations. For our own bodies, we sometimes need to take medicine to knock out a pathogen. The same holds true in a garden, where some careful spot-spraying with a systemic herbicide can kill the entrenched root systems of these underground insurgencies. Again, this is a minimalist, medicinal use of herbicide, not the chemical treadmill often aimed at asserting total control over nature.
The work involved in countering the aggressive spreaders makes the gardener really appreciate all the wildflowers that stay where you plant them. The aim is to get back to a garden where many kinds of plants coexist in relative harmony and balance. Catch the aggressive spreaders early, and gardening becomes much easier.
Posted by Steve Hiltner at Thursday, May 19, 2022