A New Raingarden on Harrison Street 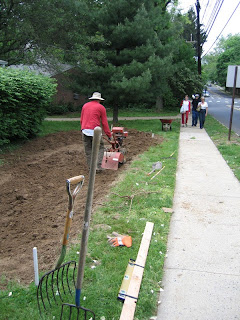 Sometimes you just have to seize the day, take an idea and run with it. Borough resident Curtis Helm called me one day with an idea for a rainwater garden in front of the Senior Center at Spruce Circle. We found a nice sunny spot that could be fed by water from the nearby roofs. Curtis drew up a design and plant list, I met with Scott Parsens, head of the Princeton Housing Authority, who then got the go-ahead from the housing board. A day later, Curtis had already picked up plants donated by Pinelands Nursery.

This past weekend, serenaded by traffic noise on Harrison Street, Curtis broke new ground, so to speak, using his trusty old TroyBuilt roto tiller to remove the sod. We then recontoured the ground with shovels, digging out dirt and building a berm to catch the runoff from nearby downspouts. 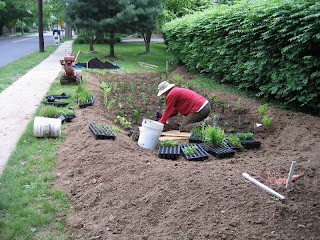 The next day Curtis planted a host of native wildflowers, rushes and ferns--Cardinal Flower, JoePyeWeed, Sunflower, Swamp Milkweed, Smooth Rush, Sensitive Fern to name a few. Switchgrass and Virginia Sweetspire will be planted on the berms. Some woodchip mulch around the edges, a trimming of the shrubs, signs to explain it all to passersby, and the raingarden's birth will be complete.

Rainwater enters from the upper and lower righthand corners, accumulates to six inches or so, then seeps in over several hours, providing the plants with an underground reservoir of water to feed on as their roots grow.

I like to think of this as "sunken bed" gardening, as opposed to raised beds.
Posted by Steve Hiltner at Wednesday, May 21, 2008