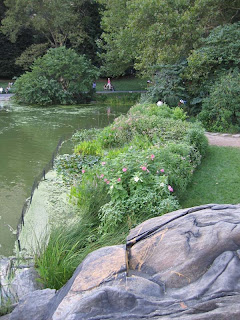 In New York's Central Park, many of the lake edges have been planted with native wildflowers. This is the first year we've tried it at Princeton's "Central Park", a.k.a. Mountain Lakes Preserve. It's not as easy as it might seem. Years ago the StonyBrook Watershed Association tried it. I've been told the geese and deer watched from afar as the plants were installed, then moved in after all was planted and munched to their hearts' content.

This past October, our Princeton Native Plant Workshop group planted the edge of the upper Mountain lake with native wildflowers grown from seed (see Oct '07 post). It was a fun session, and lots of plants went in, but they suffered from frost heave over the winter. 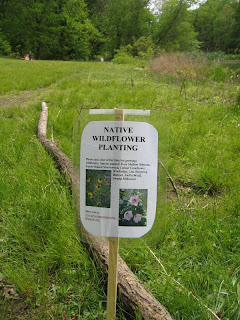 A number of the plants survived, however, and this spring I added some more from the Mountain Lakes greenhouse--cutleaf coneflower, rose mallow Hibiscus, woolsedge, swamp milkweed--and added some visual cues and signage to help prevent inadvertent mowing and trampling by passers by.

Last year, one lone Late-Flowering Boneset was all the lakefront had to offer to pollinators in July and August. With some luck, they'll have more faire to sustain them this summer.
Posted by Steve Hiltner at Friday, May 16, 2008