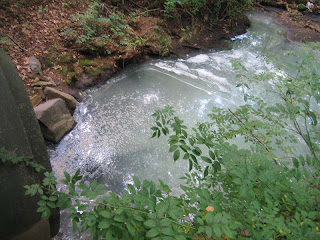 Occasionally, the water in creeks flowing into Pettoranello Gardens from town shows clear signs of pollution. A couple times, the creek feeding Pettoranello Pond from Valley Road has turned an ashen grey. On July 20th, another pipe that empties into the Gardens from under the Community Park fields was obviously carrying something that had been dumped in. It would be interesting to know what streets and businesses feed into these creeks. This particular pipe may drain the Leigh/Birch neighborhood.

I reported the incident immediately to the police, though I've since been told that Randy Carter at the Princeton Health Department is the one to contact about any sightings of water pollution. In this case, he took a look and found discoloration but no evidence of toxicity. 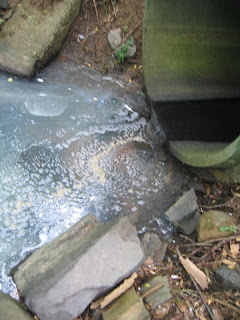