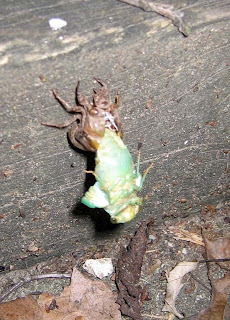 Late evening, two days ago, and a family member comes in from the backyard to report a strange sighting on the steps leading to the garden. I take a look, and am startled by the size of the insect-like thing suspended on the face of the steps.

Closer inspection revealed a cicada of unknown species doing a slow-mo back flip out of its terrestrial skin, with little proto-wing stubs on either side. 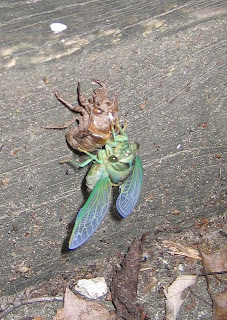 Half an hour later, it has righted itself and succeeded in pumping blood into its wings, which are now air drying. The suspension is critical, because if the unfolding wings touch anything, they will be distorted and the little beastie will not be able to launch into the flying stage of its life.

I was struck by the beauty, speed and ingenuity of this transformation to airworthy status. Another cicada pulled off the same timeless stunt two steps away, and the next day the drone of cicadas was noticeably stronger. 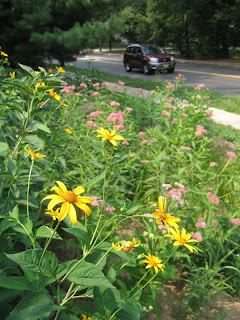 But life for the newly hatched cicadas is not entirely a carefree singfest in the trees. Nature has its checks and balances, as I found out the next day when I visited the rainwater garden on Harrison Street a couple blocks away.

There, a strange and even more massive insect-like thing flew low to the ground, landing on a tree trunk. Part of it turned out to be a cicada, the other part a Cicada Killer wasp, which had paralyzed the cicada with its sting and was now struggling to transport it. I watched as the wasp dragged the cicada up the tree trunk to a comfortable perch, presumably to munch upon this juicy morsel.

An internet search revealed that the mature wasp feeds on pollen and nectar, not cicadas, and was instead dragging it up the tree so that it could then glide with it to the wasp's underground burrow, there to lay an egg in the paralyzed cicada. The egg will then hatch and the larval wasp will eat the well-preserved cicada's insides.

Meanwhile, passing motorists see only the benign facade of flowers, if they see anything at all. Nature's workings are all the more hidden when they happen along a busy street, where people are so intent on getting somewhere else that they don't look left or right.
Posted by Steve Hiltner at Thursday, July 31, 2008