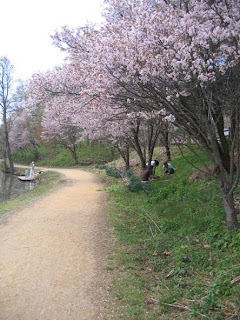 Cherry trees, planted back when the canal area was a cultivated entryway into Princeton University, add ornament to the towpath next to Turning Basin Park. Last year, the university student group Water Watch cleared out the invasive Tree of Heavens that were starting to shade out the cherries. Neither the cherries nor the Tree of Heaven are native, but the former is ornamental and non-invasive.

This spring, led by Laura Burke, some fifty students took to the water in canoes and cleaned the canal of water-borne litter.

A few of us stayed on land, clearing garlic mustard from the slope. 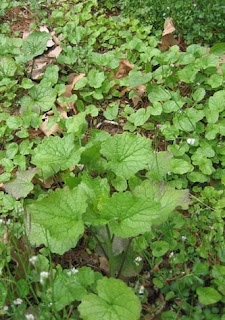 Because garlic mustard is a biennial, there were actually two generations of the plant present. We pulled only the second year plants, which were just starting to send up their flowering stalks. The smaller ones are first year plants, which we left because they won't flower this year. Many of them will die anyway, from overcrowding, before they reach the flowering stage next year.

If no plants are allowed to make new seed, eventually the seedbank is exhausted and the embankment will be clear of the weed. This is called "picking your spots", because the task of removing garlic mustard from all of Princeton would be overwhelming. It's also a way to learn new things through the conversations we have, in this case about backpacking the Camino de Santiago in Spain, and the challenges of prescribed burning in the Everglades.