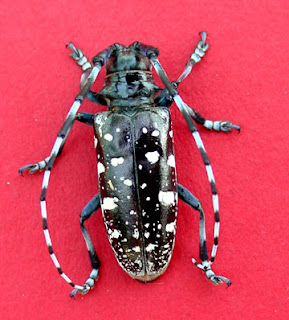 One day at the FOPOS office in Mountain Lakes House, I looked out the window to see a couple hikers scrutinizing something on the driveway. A little later, I was passing by them in my truck and stopped to ask them what they had seen. "A big black bug with white spots," they reported.

Alarms went off in my mind, as this accurately describes the Asian Longhorned Beetle (see first photo, taken from the internet), an exotic insect with the potential to wipe out our forests and street trees. The A.L.B., as it is commonly called, was accidentally introduced into the U.S. when it hitchhiked over from China in wooden shipping crates. Government agencies have been fighting to extirpate populations found in New York city, Chicago, Toronto and most recently in Worcester, MA. 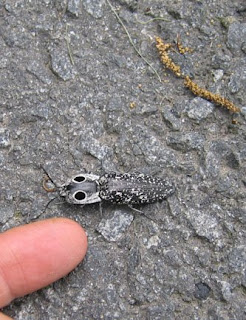 I immediately turned around and headed back up the driveway to search for the bug. I was elated to find that the bug was not the dreaded A.L.B. but instead an Eyed Elator (2nd photo), which has two large black spots on top that must do a good job of intimidating potential predators. The driveway provided a less than safe place for the beetle to blend in.

(Thanks to Nancy, office manager for Friends of Princeton Open Space, for the identification.)