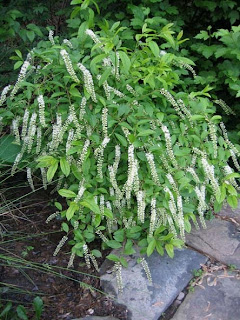 Here are a few natives in bloom right now. Virginia Sweetspire (Itea virginica) is a small, very ornamental shrub whose graceful appearance disguises an impressive capacity to endure both wet and dry conditions. When rarely encountered in the wild, it typically grows along streams, but is becoming common in the nursery trade. 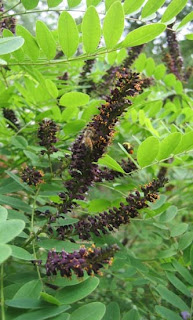 Indigo Bush (Amorpha fruticosa) is a lovely shrub in the pea family. It grows along lake and river banks in Princeton. Benefiting from the cool, wet spring, it has bloomed profusely this year, drawing a great commotion of pollinating insects with its unusual color combination of purple and orange.

Other notes: Catalpa came into bloom a couple days ago. Kousa dogwoods (an exotic but non-invasive small tree that blooms later than our native dogwood) have been blooming for about a week.

Among exotic invasive shrubs, there's a useful progression of blooms in the spring that can be used for surveying populations in the field. Asian photinia is followed in blooming by Multiflora rose (just finishing up), which is followed by Privet (just about to open).