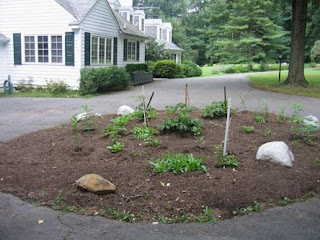 Just because a garden is surrounded by asphalt doesn't mean it's not getting used by the local wildlife. This garden was planted with help from Henry Loevner (Princeton PEI intern for FOPOS this summer). Though it's on high ground, it's planted with floodplain species--Rose Mallow Hibiscus, Swamp Milkweed, Tall Meadowrue, Purple-Headed Sneezeweed, Cutleaf Coneflower--in part because the spot receives a lot of runoff from the pavement. It's also close to a hose, if coming years prove to be dry. 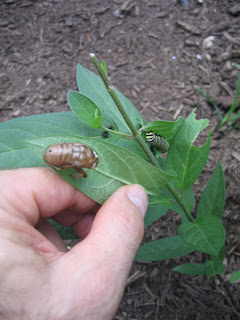 Though all the plants are just getting established, the Swamp Milkweed in the photo has already been used by three species of wildlife. The chewed off tip suggests a deer came by. The brown shell is from a cicada that used the plant as a substrate for its transformation from pupa to adult. And a monarch caterpillar can be seen chewing on a leaf. 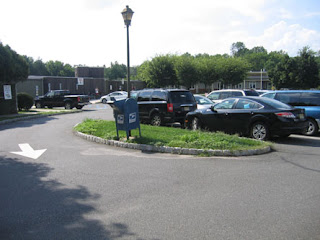 Another unlikely island of habitat is located in the parking lot close to the Community Park Pool. There, we found the holes where "cicada killer" wasps live. They are big wasps that tackle cicadas, paralyze them with their stinger, then take them back to their holes. An egg is layed in the body of the motionless cicada, which presumeably remains fresh while the hatched wasp larva eats out its insides. The immature but well-fed wasp then remains underground, its emergence next year timed to coincide with cicadas 2010. 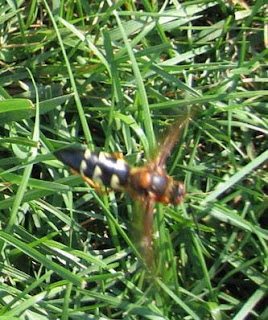 As far as I know, the wasps leave people alone, and are peacefully filling their niche amidst a sea of cars. They can be seen hovering over the grass, as if they've forgotten where their den is.