Throwaway Culture Lingers On a Branch 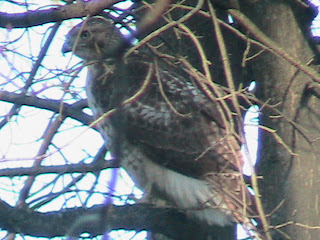 One day a few weeks back I heard a great beating of wings in the backyard. Could it be the hawk I'd seen coming through now and then, which a birder friend told me might be an immature redtail looking for a nice feathery snack for lunch? 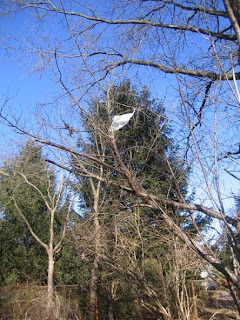 I turned towards the sound and saw ..... a plastic bag caught on a limb, flapping noisily in the wind. It fooled me several times more during the windy days that followed, and even when it wasn't playing with my expectations, it was stirring memories:

..... of documentaries at the recent Princeton Environmental Film Festival that told of vast gyres of plastic trash collecting far out in the ocean. The plastic absorbs pollution from the water, then gets inadvertently swallowed by fish or whales, whose stomachs slowly fill with toxic, indigestible plastic.

..... or the time a decade back when I visited the far south of Argentina's Patagonia. There, the summer wind blows so strong it can yank a plastic bag out of your hand and send it sailing down the street, to catch on distant fencelines or any plant brave enough to grow more than a few inches high. Some fields of desert scrub, downwind of town, fooled me, too, appearing at first glance to be in full bloom, decked out in the white of fugitive plastic.

From its perch high in a backyard tree, that's what a deceptive bag is saying to all who will listen: "Don't be fooled. Little things add up."