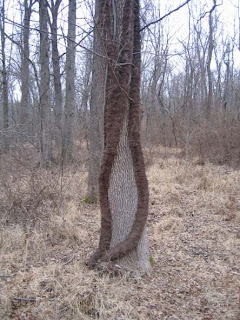 Fortunately, Mountain Lakes Preserve has not been invaded by Bermese pythons (check out NOVA this coming Tuesday on PBS), despite the appearance of this poison ivy vine. It looks like it grew a winter coat, but poison ivy vines are always hairy, which rhymes with scary. 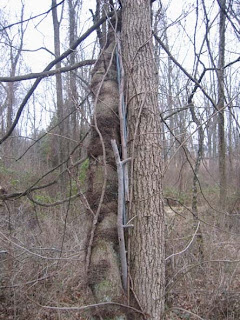 In this photo, the poison ivy is almost as big as the tree its climbing on. Looks like an angler stashed some fishing line inbetween the two. 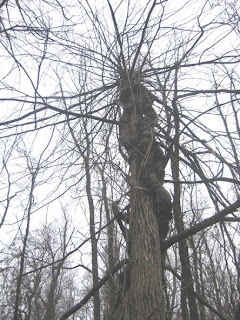 Further up, it looks like the tree has lots of branches, but these are actually the vine's lateral shoots, which will bear flowers and berries later on. What we have here is essentially a poison ivy tree held upright with the help of a "donated" trunk. 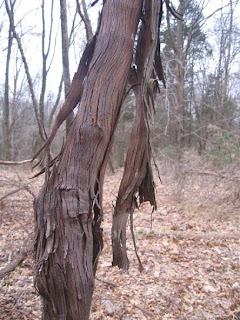 The vine with the shaggy Irish setter-like bark is wild grape. 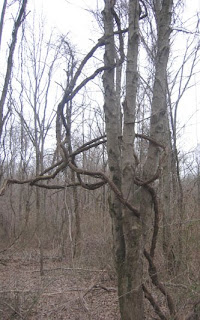 Native vines like poison ivy and wild grape tend not to grow in a way that would strangle the trees that support them. 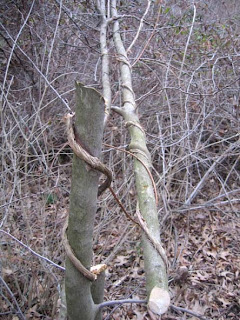 Japanese honeysuckle, on the other hand, was spiraling up this shrub in a way that would eventually choke it. The trunk of the shrub was already getting distorted by the vine's tight grip. Note exotic honeysuckle vine's stringy bark, lighter in color than wild grape.
Turned out that the shrub was an exotic Asian photinia, so we cut both the shrub and the vine. 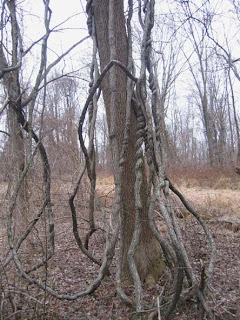 Asian bittersweet is very common at Mountain Lakes, identified in winter by its gray bark and large size. I had hoped to learn to distinguish it from native bittersweet before starting large scale removal, but it's likely that no native bittersweet remains in the park, or has lost any clear identity through hybridization with the exotic species.