Mountain Lakes and the Panama Canal

A PBS documentary last night on the building of the Panama Canal offered a dramatic portrayal of the beginning of the 20th century, when the U.S. was emerging as a world power. Described at the time as "The greatest liberty ever taken with nature", the canal was gnawed out of swamps and mountains with a combination of dynamite, giant steam shovels (think Mike Mulligan), and brutal manual labor. Teddy Roosevelt started the project in 1904. After ten years and 5600 lives lost to landslides and epidemics of yellow fever and malaria, they blew up the last retaining dam, allowing water to fill the final segment of the canal.

Meanwhile, the pre-refrigeration age was all the rage in Princeton (why they didn't include this in the documentary I cannot say). Mountain Lakes Ice Company was harvesting blocks of ice from Mountain Lakes and distributing them to residents and businesses on carts pulled by mules. Small liberties had been taken with Mountain Brook some years prior, when the lower dam was built in 1884, and the upper dam added in 1902. 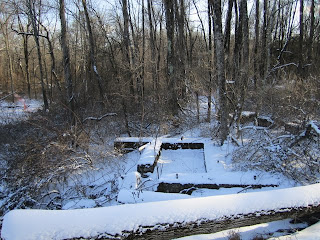 Steam power (the foundation and chimney are still visible in a thicket of invasive shrubs) was used to transfer the blocks of ice from the lake to the three-story insulated barns for storage. 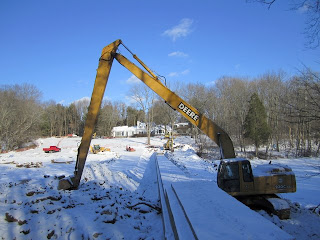 Maybe this juxtaposition came to mind because just last week, a retaining dam (buried in snow to the left of the restored dam in the photo) built to protect the upper dam during its restoration was removed, albeit not with anything as exciting as dynamite. This spring, the upper dam will return to action, backing up water to refill the upper lake, now restored to its original size and depth.

While the Panama Canal represented a will to overcome nature's obstacles in the name of economic progress, a contrary movement to preserve the great American landscapes began at the same time, as Roosevelt set about protecting lands in 1902.

The Panama Canal happens to play a role in a pathbreaking drama about climate change that debuted last year at the McCarter Theater in Princeton. Called The Great Immensity, its story begins on an island in the middle of a lake created by the canal. Scientists have been conducting a longterm study there to better understand whether populations of wildlife can survive when they become isolated in small fragments of habitat, as has happened to much of New Jersey due to development.

Wouldn't it be nice if the two often conflicting drives--economic expansion and preservation of natural heritage--could converge into what's being called a green economy. Mountain Lakes Preserve is one place where a historical example of a sustainable economy (ice harvest) and land preservation find common ground.
Posted by Steve Hiltner at Tuesday, January 25, 2011