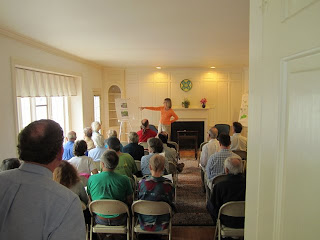 Friends of Princeton Open Space had its annual meeting May 1 at Mountain Lakes House. Here, president Wendy Mager is pointing out the window to where the newly restored upper dam is now operational. The upper lake, which had become filled with eight feet of sediment over the past 100 years, has regained its original depth. 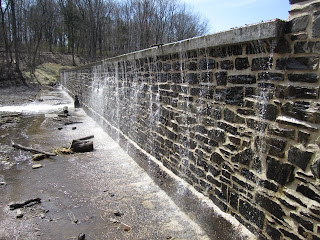 Water flows in a glistening curtain over the full length of the new spillway. 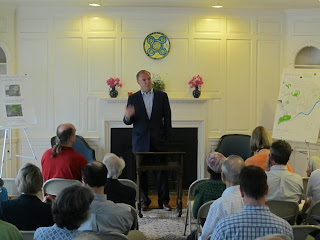 Guest speaker Bob Martin, who is Commissioner of the New Jersey Department of Environmental Protection and lives in Princeton, told an attentive audience about state environmental policy. During QandA, he was asked about the state's continued desire to dismantle the DR Canal Commission, despite compelling arguments and strong public support for its continued existence. 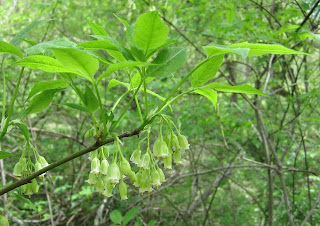 Afterwards, I led a walk around Mountain Lakes, pointing out various species, including this flowering bladdernut 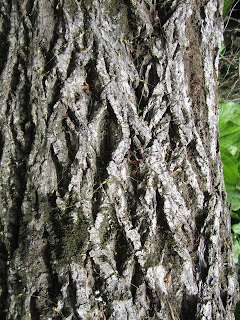 and the woven bark of butternut (also called white walnut). Both of these species are rarely encountered in Princeton's forests, though there's an effort underway at Mountain Lakes to find and propagate native butternuts. 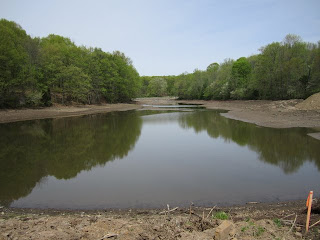 With the upper lake and dam restored, the lower Mountain Lake will be the focus of work this summer, as the dam gets rebuilt and enlarged, and the historic spillway is reconstructed from a jumble of rocks. 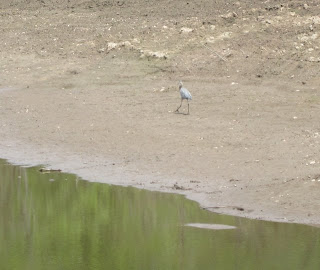 In the meantime, the great blue heron is trying to go about business as usual.
Posted by Steve Hiltner at Wednesday, May 18, 2011