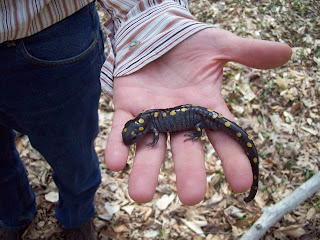 Most of us haven't seen a spotted salamander. They shun the light, spending their time under logs and leaf litter. Some people have a knack for finding them, like the Princeton Hydro biologist who found one at Mountain Lakes Preserve, just up from the Upper Settling Pond. The pond was built in the 1950s, probably to catch sediment coming downstream before it could get to the upper Mountain Lake.

The pond did its job so well that it became filled with sediment, except for one section whose shallow water allows spring peepers, and apparently a few salamanders, a place to lay their eggs each spring. Wikipedia describes a symbiotic relationship in which a green alga lives in each clear, bubble-shaped egg alongside the developing salamander. The alga produces oxygen for the salamander, and the salamander in turn provides carbon dioxide for the alga with each breath. It reminds me of a miniature Biosphere--the three acre greenhouse in Arizona where eight people lived for a time, sealed off from the outside world, in complete co-dependency with the greenhouse plants.

Since the pond is going to be dredged, and the combination of fish and deeper water will not suit the needs of amphibians, a search began recently for places to dig vernal pools. We found places for three, including a field that once had a swimming pool. If all goes well, the frogs will still sing every spring, and there will still be a chance for the lucky few among us to find a salamander under a log.
Posted by Steve Hiltner at Tuesday, May 03, 2011