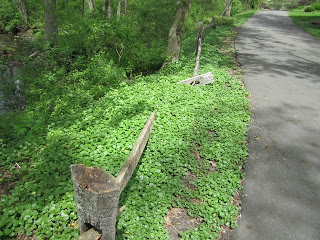 Among invasive species, the most intimidating are not the giants like kudzu but instead the diminutive species that quietly multiply into millions, defying anyone to pull them all up. Lesser celandine, which has engulfed large areas at Pettoranello Gardens, cannot even be successfully pulled up, as each plant forms many bulblets underground that remain even if the plant itself is pulled. The species, which turns yellow this time of year as it goes into dormancy until next spring, continues to spread downstream into Mountain Lakes and beyond.

I've heard many testimonials from gardeners who love its yellow flower when it first shows up, then become distressed as it begins to take over the garden. Spraying with a low toxicity herbicide like 2% glyphosate (the active ingredient in Roundup) is the only way to get rid of it over time, unless one can cover it all up with a layer cake of cardboard and mulch when it first appears in the spring, robbing it of energy. Leave one plant, however, and the problem begins anew.
Posted by Steve Hiltner at Sunday, May 22, 2011