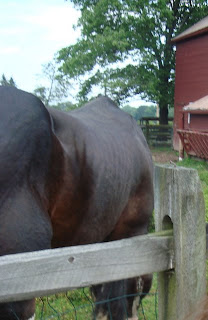 It seemed a straightforward drive out into the country, to help a currently carless friend check out a cottage to rent at a small farm. The farm came with 40 sheep, which help mow the neighbors' lawns, and a retired draft horse named Gentle Ben. I found the big horse with the ornate Clydesdale-like hoofs impressive, though if this picture looks curiously composed, it's because I cropped off my daughter holding her nose. Kids tend to exaggerate. 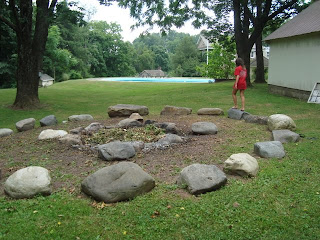 Away from the animals was a fire circle, the likes of which people have told me they wished could be had in Princeton for gatherings of youth groups like the Girl Scouts. 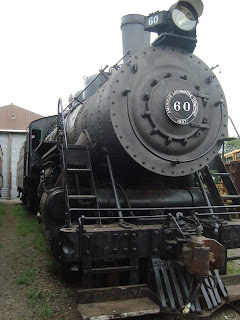 On the way back, the trip took on new dimensions when we stopped out of curiosity at an old country railway station, which came equiped with its very own steam engine, built by the American Locomotive Company back in 1937. 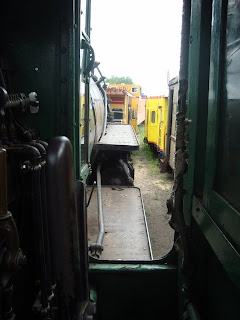 Nearby were an assortment of old train cars and retired cabooses. Some had "stay off" signs, others did not, and the general feel of the place suggested an unstaffed, informal railroad museum. 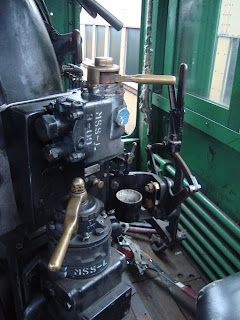 Seeing no signs disallowing it, we decided to explore the steam engine's cab, packed with levers of many shapes and obscure functions. Lower in the photo you can see a cupholder (a design feature that anticipated the mounting of cup holders on strollers many decades later). Careful examination of all the surrounding levers suggested that this is where the engineer would make his cappuccino during long cross-country trips. 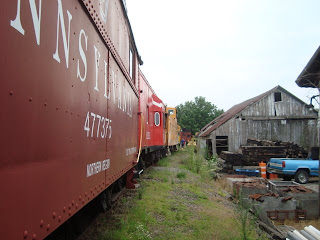 An informal museum can be more "transporting" than the standard formal variety. There was a feeling that these train cars are not necessarily at their final resting place, but might still get taken out for a spin now and then. The smell of oil on metal, and the pre-digital, straightforward nature of the place made us all forget the hurried, multi-tasking cellphone age waiting in our pockets. There is something refreshingly direct in a cord that travels from an engineer's cab down the barrel of the engine to a brass bell, 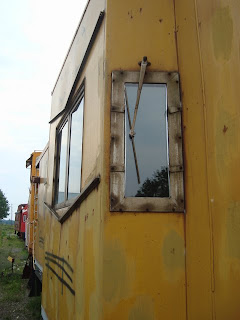 and the simple utility of a windshield wiper on a caboose. 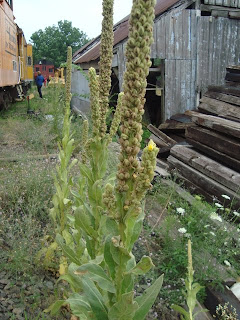 Even the weeds were authentic, reminiscent of what I used to see along rail lines in the midwest: Wooly Mullein, Queen Anne's Lace, bull thistle, sweet clover and, less endearing, given past run-ins with its invasive capacities, spotted knapweed. 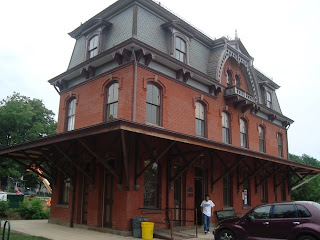 Back in Hopewell, we stopped briefly at their fine old train station, complete with a functioning rail line behind it, and a class in english dancing underway inside. We thought the history tour was over, 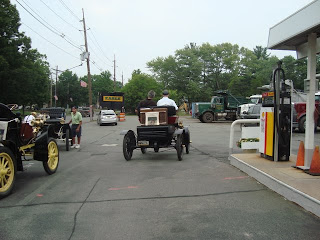 until we passed by a gas station on Hopewell's main drag, where some horseless carriages had paused on their journey to Princeton. 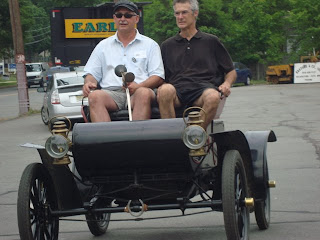 The proud owner of a 1905 Oldsmobile even offered to give each of us a ride. One cylinder, two gears, a rudder instead of a steering wheel, and a smooth quiet ride. "The first mass-produced horseless carriage," he said. The Model T was still a few years off. I thought it would get great gas mileage, but he guessed around 18 mpg. The carburetor leaks more gas than it passes along to the engine, he said.

Like my daughter, he emphasized the unflattering aspects of horses, referring to the 10,000 pounds of manure produced in New York City each day before horseless carriages came along.

Future histories, written in a world transformed by climate change, will look more kindly on Gentle Ben than on the machines that followed, but it was a charming bit of serendipity to happen upon so much free-range history out and about on a Sunday afternoon.
Posted by Steve Hiltner at Wednesday, July 27, 2011

Email ThisBlogThis!Share to TwitterShare to FacebookShare to Pinterest
Labels: Places To Visit