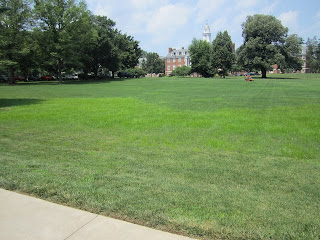 My daughter says that what she likes about bike riding is that you're going just the right speed to see everything as you go by. A bike ride up Hamilton Ave. offered some fine displays of weeds for general edification. Most people would see in this photo a royal spread of turf meant to set off Westminster Conservatory to its best advantage. But what I noticed is the expanse of Nut Sedge spreading through the lower parts of the lawn. It's the light green in the photo, contrasting with the darker green of the turfgrass. 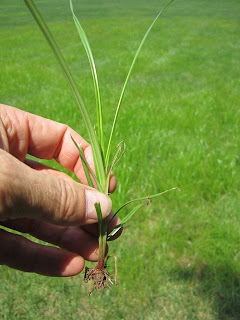 You likely have Nut Sedge growing in your garden. Like all sedges, it has a triangular stem. Most sedges are native and perennial. This one is non-native and an annual. It pulls out of the ground very easily, but is intimidating in its abundance. Either keep it well pulled, or suppress it with mulch, or, if you don't mind it taking over your garden, enjoy the attractive inflorescence it constructs on top of the stem. 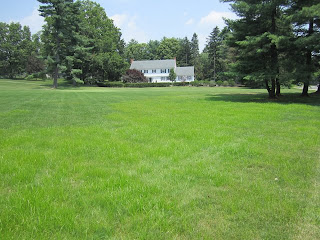 As to what can be done about such an invasion of traditional turf, it's doing a good job of defining where Westminster could plant an expansive raingarden to feed the local pollinators and birds. 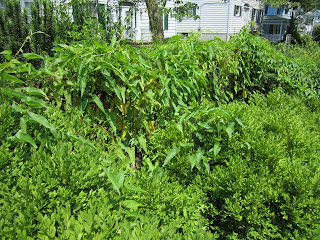 Further up Hamilton Ave., a fine display of Bindweed, the weedy member of the morning glory family, here seen crawling over boxwoods and a fence. Like Nut Sedge, it can be very hard to get rid of, but staying on top of the weeding will slowly starve the underground portion.
Posted by Steve Hiltner at Tuesday, July 12, 2011