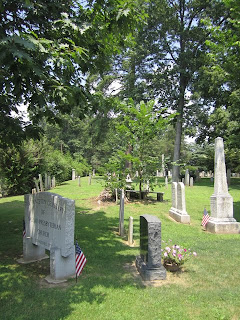 Keep riding up Hamilton Ave. and it starts changing names, which is one of the exciting things about living in Princeton. You think you're on one lazy street, when suddenly, unbeknownst to you, it has changed itself into another.

Hamilton Ave. is one of the most dynamic stretches of asphalt in this respect, perhaps in all the world, because it begins as Tyson Lane down in the lowlands of the east, then transforms itself in the blink of an eye into Littlebrook Road. Before you know it, it's changed again into Rollingmead Street, then settles into Hamilton Avenue for a good six blocks before whimsically becoming Wiggins Street. Subtle clues, which I have yet to discern, tell you if you're on a lane or a road or a street or an avenue. 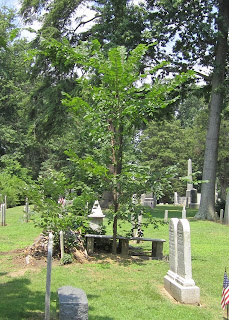 Just before Wiggins is about to give up the ghost to become Paul Robeson Place, across from the public library, a glance into the cemetery will reveal a new American Elm growing next to the stump-shaped gravestone of the great "mother elm". Unlike many distinguished denizens of Princeton, the "mother elm" did not win a Nobel Prize, but it did earn an article in the NY Times at the time of its passing in 2005, telling of its glorious past and contributions to society. Those are some big shoes for the new tree to fill, but it appears unfazed.
Posted by Steve Hiltner at Tuesday, July 12, 2011