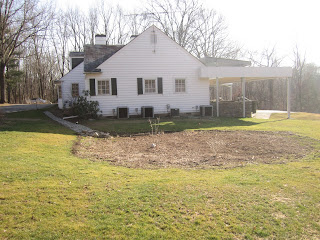 One project I was able to get implemented at Mountain Lakes House in Princeton is the construction of a raingarden. I designed and located it so that it would capture runoff from the lawn, driveway and a portion of the roof. Township staff did the contouring, and planting was done by Polly Burlingham of Sigmund Garden fame, financed by a private donor. 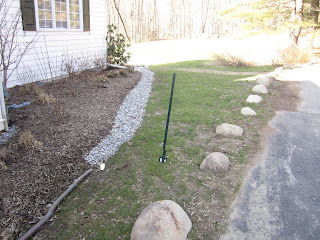 It was particularly important to redirect runoff from the driveway down this contoured swale to the raingarden. Before, water flowed towards the foundation, which led to flooding in the basement. 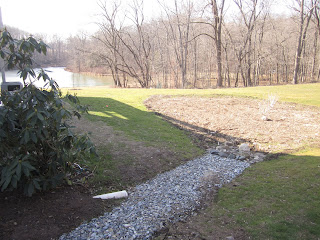 Now, the runoff will have a positive effect, helping to keep the raingarden wet. A typical raingarden is designed to collect about 6 inches of water, which then infiltrates into the soil over a day or two, creating an underground reservoir of water that the wildflowers, sedges and shrubs can tap into during droughts.

Since it was installed last fall, it's still awaiting its first growing season. Plants have been labeled (cardinal flower, joe-pye-weed, winterberry, buttonbush, etc). You can reach this site by parking at the Community Park North parking lot off of Mountain Ave at 206, and walking down the long driveway through the woods to Mountain Lakes House. In the distance in the photo is the recently restored upper Mountain Lake.
Posted by Steve Hiltner at Friday, February 10, 2012