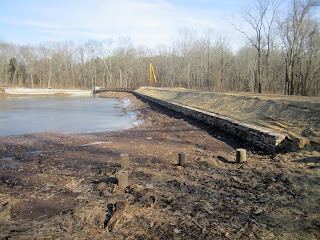 I haven't heard anything official, but it looks like the lower dam at Mountain Lakes Preserve is nearly complete. The wooden posts in the foreground mark where a ramp once was located for hauling chunks of ice out of the pond and hoisting them into the 3-story ice barns that used to rise behind the dam to the right.

The ice operation closed down around 1930, as refrigerators became more widely available. The stone wall extending the length of the dam is completely new, designed to mimic the original wall that now lies buried under the expanded earthen portion of the dam. For safety reasons, the dam is now broader and several feet higher than previously. 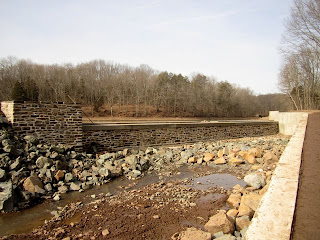 At the other end of the dam stands the newly restored spillway. As far as I know, the informative signs that were there prior to restoration will be reinstalled, describing the decades during which Mountain Lakes supplied Princeton with ice for its iceboxes. 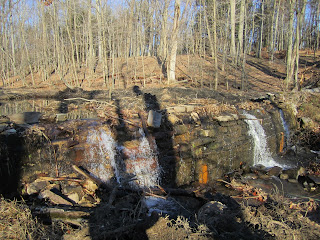 Meanwhile, upstream of the two Mountain Lakes is another dam that was added onto the project, funded by the same anonymous donor. I had long argued in favor of restoring this "upper settling pond", also known as North Pond--an argument that was going nowhere until funding became available. It's located on one of the two tributaries feeding the lakes, and was built in the 1950s by the Clarks, who also built Mountain Lakes House around the same time. 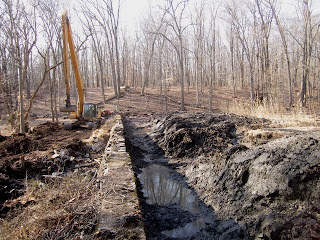 The pond is called a catchment basin for good reason. Water rushing downstream from Witherspoon Woods drops its sediment in this pond, thereby greatly reducing the amount of sediment that would otherwise have continued into the Mountain Lakes. It played this role very effectively, completely filling up over the past 50 years. There must be 8 feet of very rich sediment here, which this week is being trucked away, perhaps to a topsoil business. 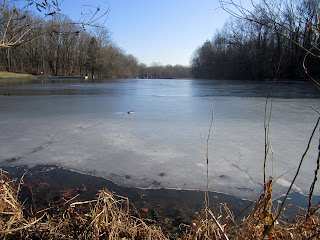 With the catchment basin trapping sediment, at least on that one tributary, the upper Mountain Lake will last much longer before it once again will require dredging.

This is my favorite vista, standing at the northwest, upstream end of the lakes, looking down.
Posted by Steve Hiltner at Monday, February 20, 2012