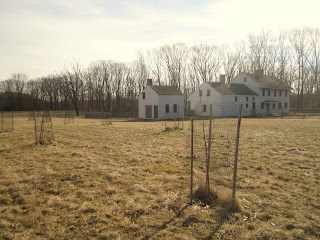 I had heard there was a house somewhere near Princeton where George Washington stayed for awhile. Over Presidents' Day weekend, we finally made it out there to have a look. Conveniently, for us if not for the owners, the house has moved a mile closer to Princeton over the years, displaced several times by an expanding quarry. Now owned by the state, the house has hopefully reached its final destination on a bluff just outside Kingston.

They've planted an orchard in the field--something the Princeton Battlefield has in its long-range plan to recreate a more authentic landscape.

Washington's several month's stay was eventful, as described in this borrowing from Rockingham's kiosk. 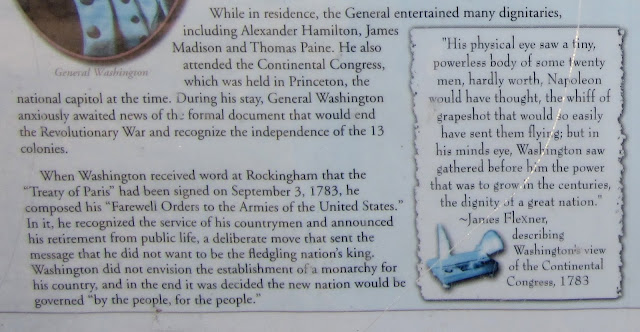 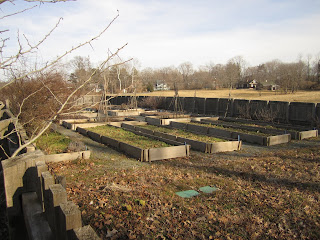 Behind the house is a new colonial garden. Someday I'll return to ask if raised beds were common back in the day. 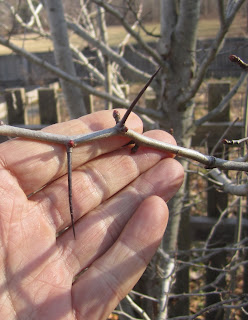 Thorns from hawthorn trees were used for pins in clothing. 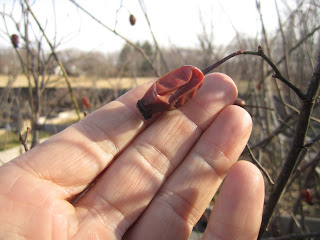 Next to the hawthorn are some old-fashioned rose bushes with nutritious general-sized rosehips. 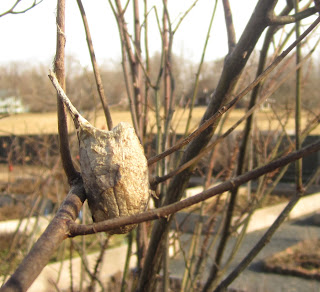 Though it may prove auspicious for pest control, I doubt that this praying mantis eggcase would have been found in a colonial garden. According to some internet searching, there are 20 mantis species native to America, but the 2 most common species were introduced from Europe and China. 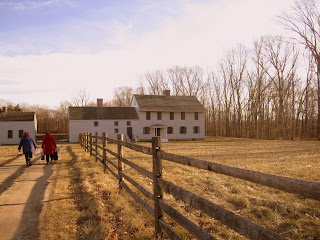 After the tour (Did you know that the colonists won only three battles during the whole Revolutionary War--Trenton, Princeton and Yorktown--and that Washington's hair was real?), it was closing time as the shadows grew long and the staff made the hike from the visitors' center to the house. 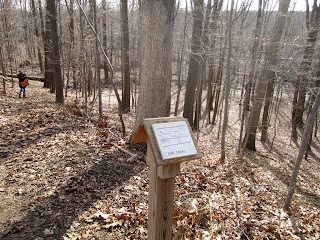 Depending on the status of the towpath these days, this is a very reachable destination by bicycle from Princeton, as the house is perched just above the towpath a mile or so past Kingston, with a path leading up through the woods. Check out the programming at http://www.rockingham.net/.
Posted by Steve Hiltner at Friday, February 24, 2012