A Taste of Taiwan in a Neighbor's Garden 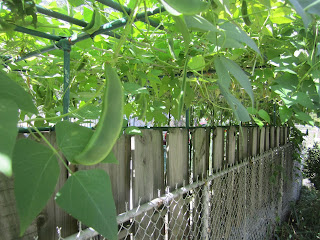 Every now and then, walking the streets of Princeton, one encounters a yard devoted to growing food rather than grass. Many are in keeping with the Italian custom of treating a neighborhood like a matrix of minifarms, often with small fruit trees and handmade arbors growing behind a high fence.

An elegant nearby example with Taiwanese origins often gets worked into the evening walking-of-the-dog. Passing by last week, I introduced myself to the owner and got permission to take some photos. He told me about his lima beans, which he says are the most nutritious kind of bean to be had. 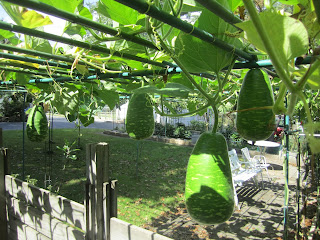 Also hanging down from the well-tended arbors, like Charlie Chaplin's vision of paradise in Modern Times, is something I didn't catch the name of, but may be Chinese melon. 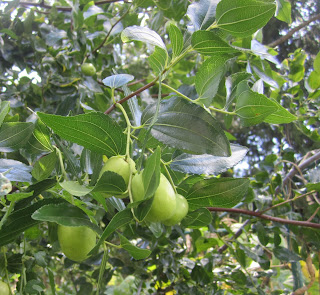 On a small tree grow "Chinese dates", which turn out to be jujube--latin name Ziziphus zizyphus, in the buckthorn family (Rhamnaceae). Usually, the family name Rhamnaceae strikes fear into my heart, having experienced the extraordinary ecological mischief caused by Rhamnus cathartica in the Midwest. Web posts carry warnings that jujube can send up suckers in nearby flower gardens, which may be why this benign-looking tree was growing between a driveway and a mowed lawn. It tastes reminiscent of an apple. 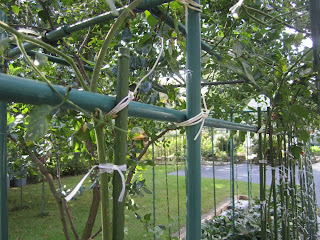 The arbor is made of electrician's piping, galvanized to prevent rust, with some portions connected with metal joints, others hand-tied. Stems of cherry tomatoes too are tethered to these pipes, their growth carefully directed until they can head horizontally, occupying a parallel universe with the beans and squash six feet above the lawn. This double decker yard makes maximum use of space.

Having once again this year let my squash and volunteer gourds run rampant over my visions of backyard order, with regular pilferings by squirrels and catbirds, it's a relief and inspiration to see what a little more planning, vertical training and steady effort could yield. All it takes is a modest bit of ground, sun and water, add equal parts tradition and devotion, and the result can be a dream serene of order and easy pickin's.
Posted by Steve Hiltner at Tuesday, September 25, 2012