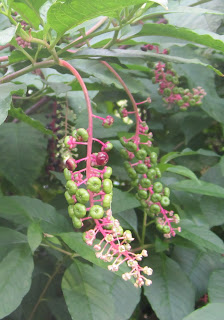 I suspect most people develop ambivalence towards pokeweed over time. With thick annual stems rising as much as eight feet up from perennial roots each year, pokeweed (Phytolacca americana) can become a striking specimen if given enough room, with flowers and berries that hang like elaborate jewelry from purplish stems. And yet its elegance tends to be ragged around the edges, and its admirable capacity to fill voids in the garden quickly segues into a realization that its many offspring are leaving no room for anything else to grow.

One approach to managing its exuberance is to dig out most of the volunteer pokeweeds each year, leaving one or two in an out of the way spot where they have enough room to reach their full size. 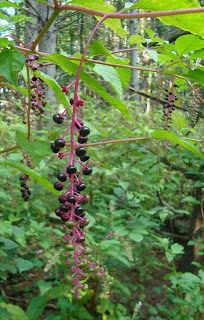 The berries are poisonous for people but not for birds, and were once used for dyeing clothing. The only current application of the berries as a dye that I'm aware of happens accidentally when a robin eats berries from one yard, then dive bombs the neighbor's laundry hung outdoors to dry. A land manager I know relishes telling this story, while asserting that the neighbor could easily avoid the consequences by putting her clothes out closer to midday, after the birds had already processed their early morning feast.

Here's an example, sent by a friend, of the berry's use in colonial days to dye uniforms the color of garnet.

"Check out this interesting use of pokeweed berries, at Hampden-Sydney College in Virginia which was founded by the son-in-law of John Witherspoon:"
http://www.hsc.edu/About-Hampden-Sydney/History-of-H-SC.html

Sometime I'll find a photo of my daughter standing on the trunk of an ombu tree (Phytolacca dioica), a close relative of pokeweed that grows in the pampas of Argentina. It grows like a tree yet has no wood. The swollen base of the trunk provided gauchos with a shady spot to sit down and play guitar.
Posted by Steve Hiltner at Saturday, September 08, 2012