The Hungry Hawk Pays a Visit 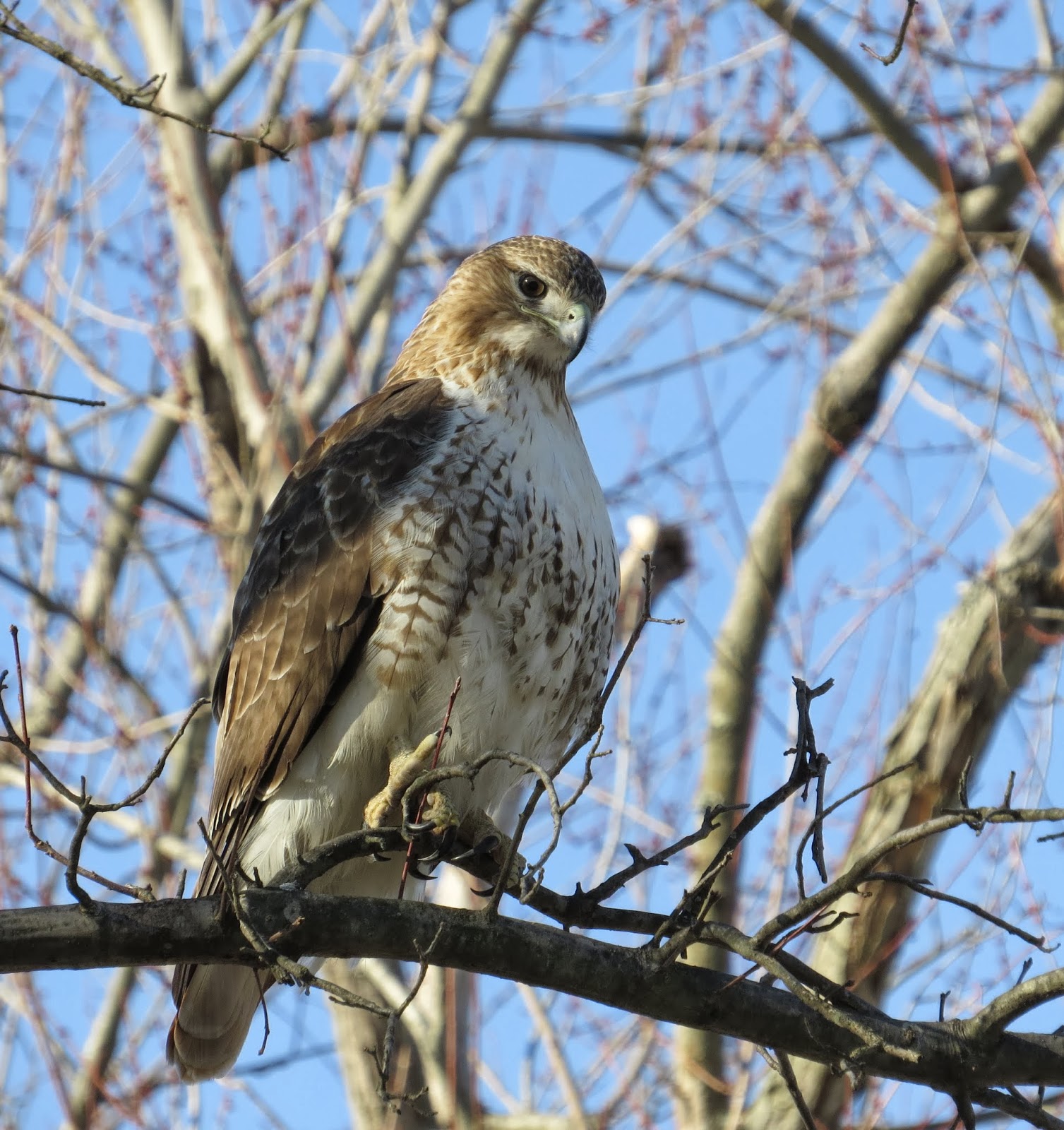 My daughter called to me yesterday from the family room that looks out on our backyard. She had just seen a hawk swoop down on our freely ranging ducks and chickens. Only the loud complaints of the largest duck, it seems, caused the hawk to veer back up to a nearby tree. In this dreary late winter time of tired snow and lingering chill, it's not surprising this beautiful, unsubsidized red tailed hawk, living by its wits through lean times, would take an interest in our backyard fowl. 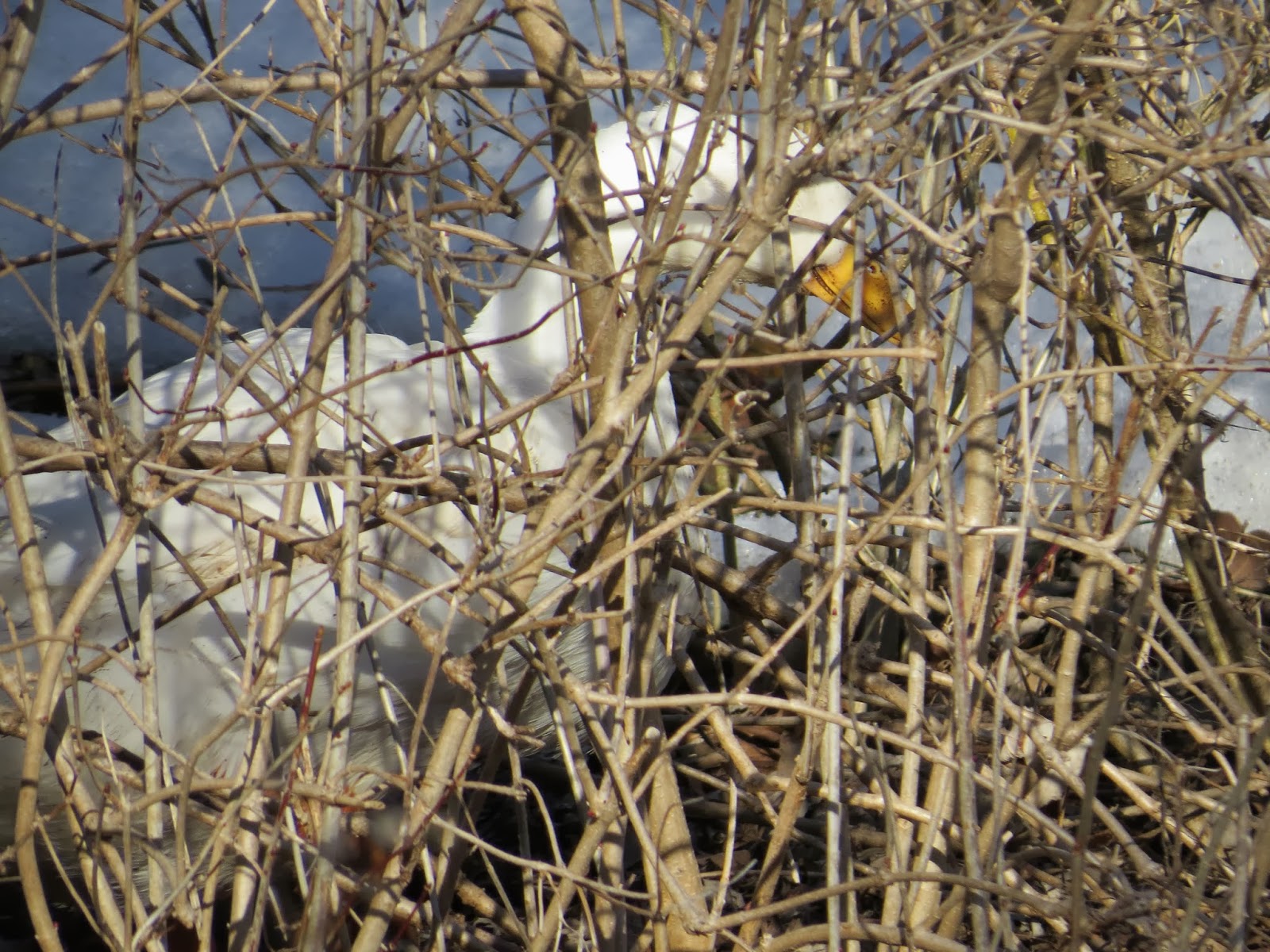 Our first impulse, seeing it posing so nobly on distant tree branch, peering with less than noble designs at our small flock, was to take a photo. There was time, particularly given that the objects of its desire had taken cover behind a thick tangle of brush in the back corner of the lot. Brush piles have their uses in the winter, when the landscape is otherwise stripped of hiding places. 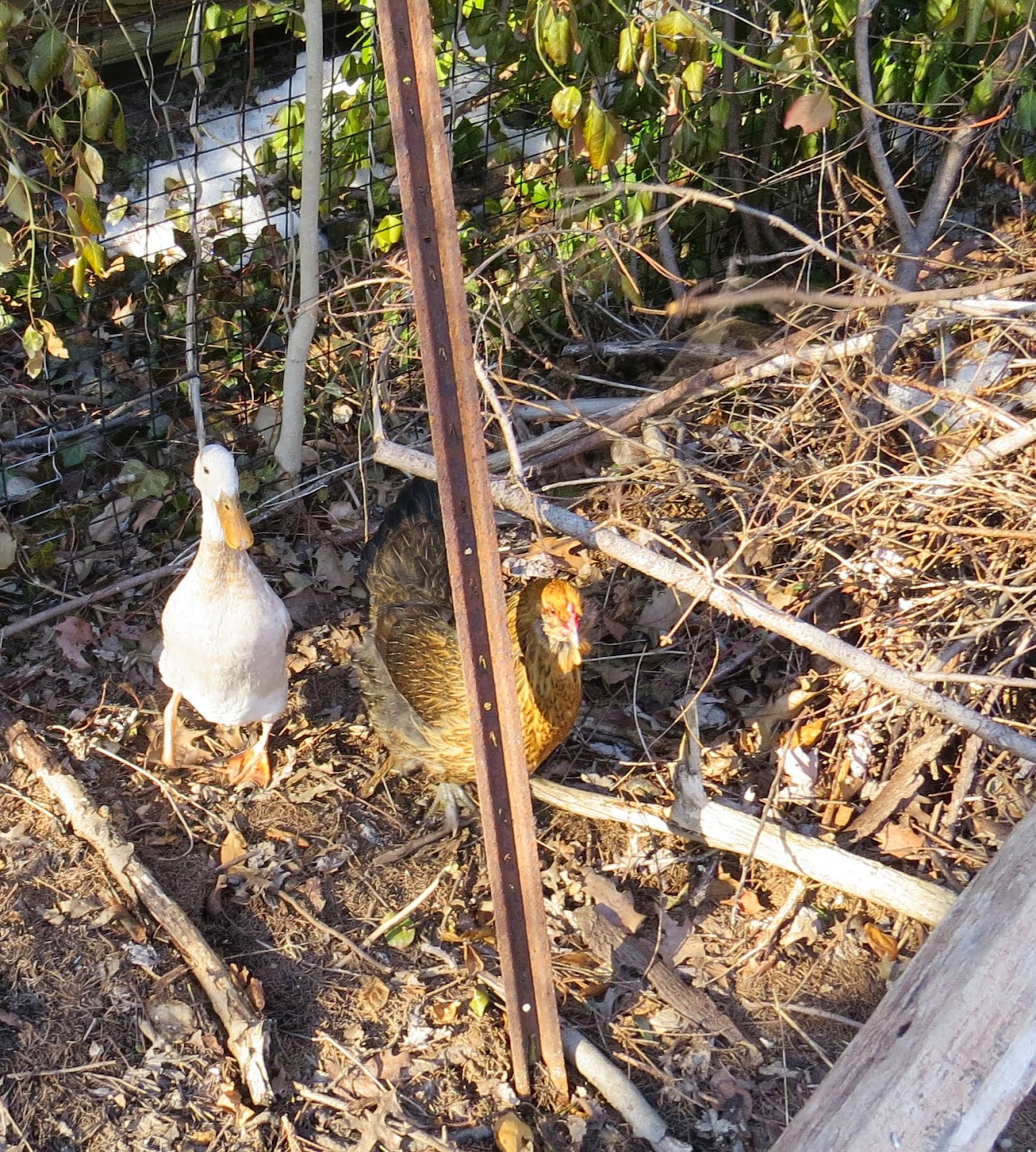 We went out into the yard expecting the hawk to fly away. Instead, and despite its clearly diminished prospects, it continued to look down at us, apparently having no better place to go. Finally it flew off and the runner duck and Buttons the chicken re-emerged from behind the woodpile. 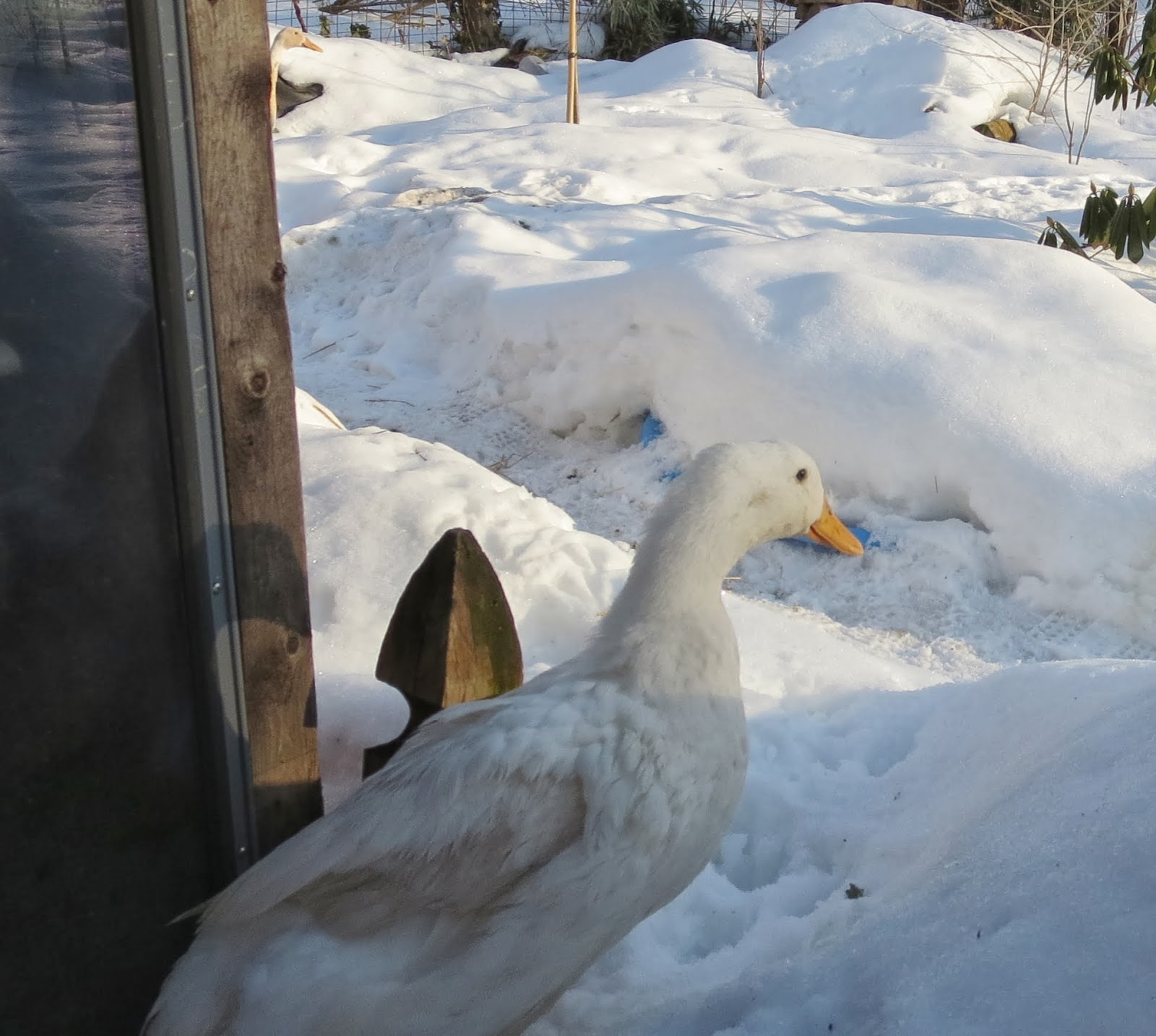 And who do we have to thank for our birds' continued survival in a world of very hungry hawks? Why, it's the very clumsy but very brave Pekin "guard duck", with the keen eye and a voluminous quack she's not afraid to use when it is most needed.

Her quack has had no effect on the snow, however, which lingers despite the ducks' clear preference for a more liquid world. 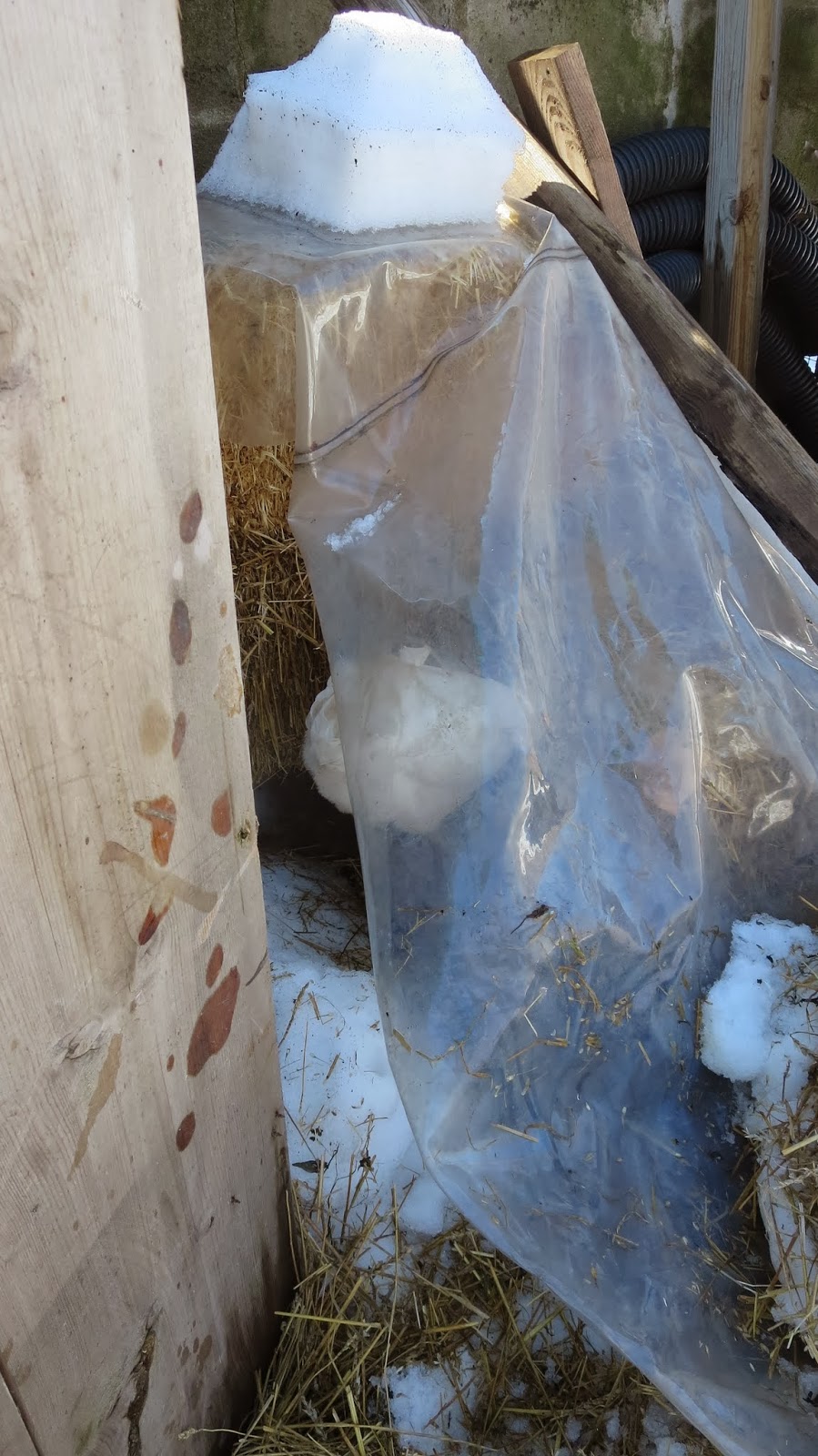 We had another scare a few weeks ago when Buttons disappeared without a trace. Had a raccoon snatched her when we left the coop door open too late one evening? Strange that there were no feathers scattered around to indicate a struggle. It took me a couple days to break the news to my daughter, who went outside, poked around, and found that the chicken had somehow gotten trapped under the plastic cover on the bales of bedding straw. She had survived on a diet of snow until she was discovered.

Though the ducks clearly miss taking baths in the backyard miniponds, the birds have done remarkably well through a difficult winter, without any supplementary heat. The chickens stopped laying for a month or two during the shortest days, but then resumed, and the ducks continue laying eggs like clockwork, one a day, each, oblivious of day length, cold, and the lack of anything beyond chicken feed.
Posted by Steve Hiltner at Friday, March 07, 2014