I was recently elected chair of the Princeton Shade Tree Commission. One of our first tasks this year is commenting on proposed changes to the Princeton Shopping Center's parking lot. Some existing trees will be removed and new ones planted as part of a reconfiguring of the parking and access lanes. Because we often aren't conscious of what trees we pass as we drive or bike around town, it's useful to document what's already there with photos. This post, then, is basically an inventory of what exists now, with a midway reflection on how we tend to be individually thoughtful but collectively thoughtless when it comes to the world we live in. 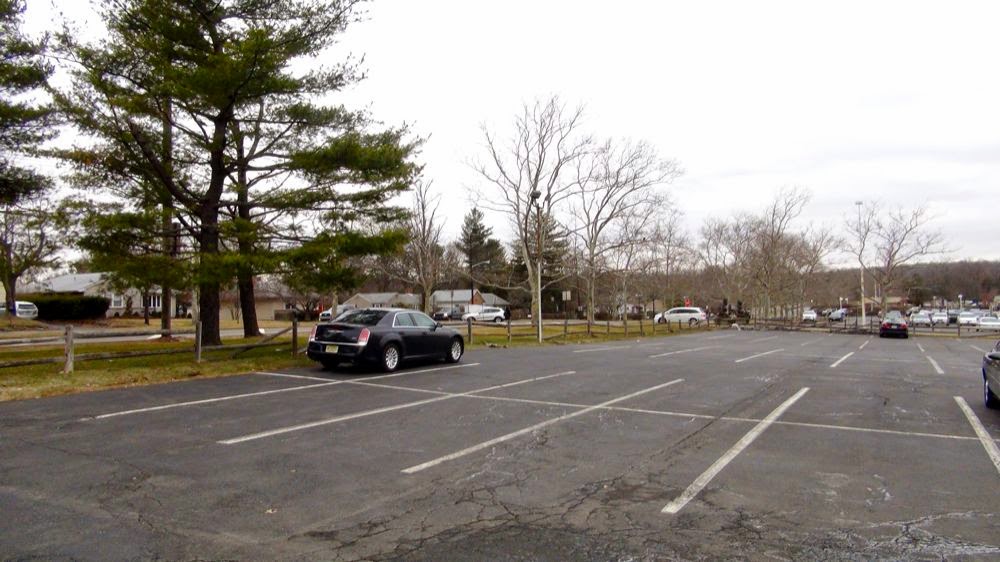 Along Harrison Street, there's a grove of pines and a long line of sycamores. 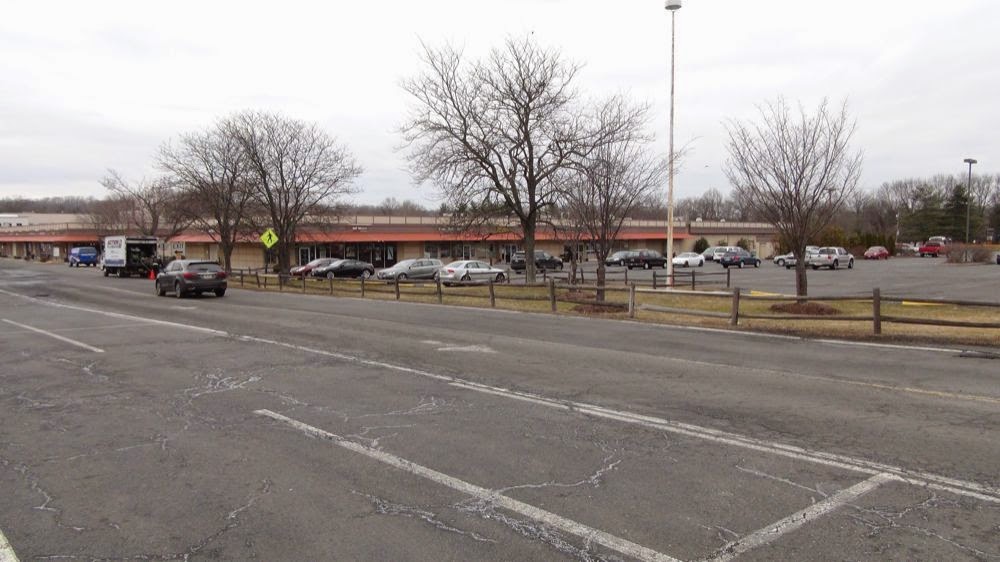 The southwest corner of the shopping center has three large, healthy locust trees and a few struggling weeping cherries. 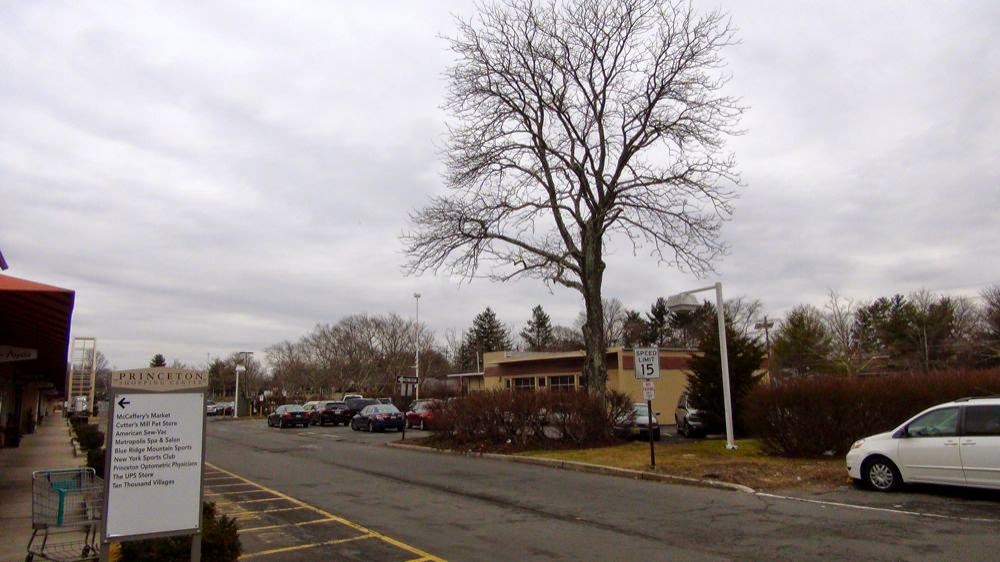 One big honey locust stands near the old gas station, along with a dense hedge of winged euonymus--a non-native shrub that has invaded the local nature preserves. 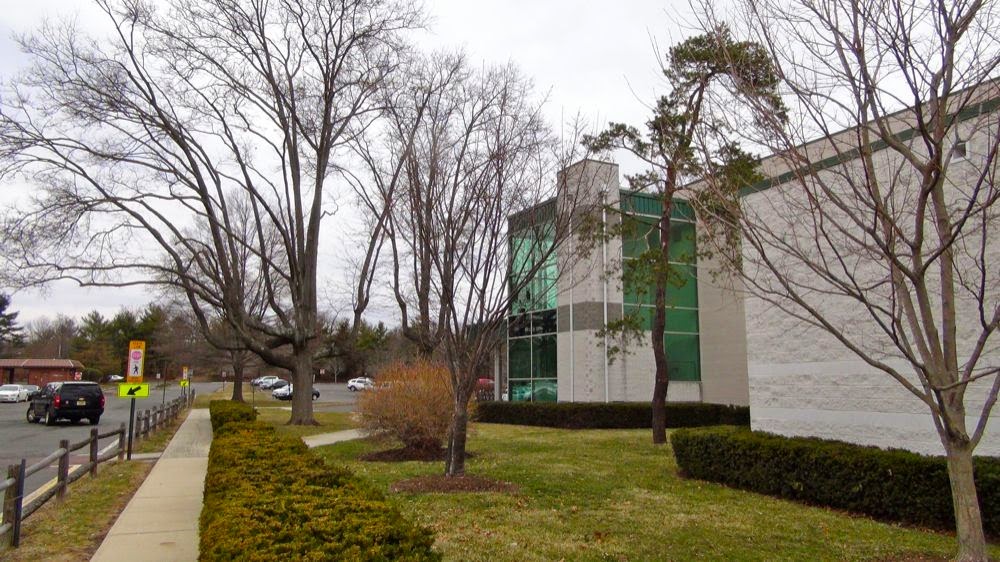 Though the architectural drawings are hard to read, it looks like the tree slated for removal on the west side of McCaffery's is the struggling pine tree closest to the building. 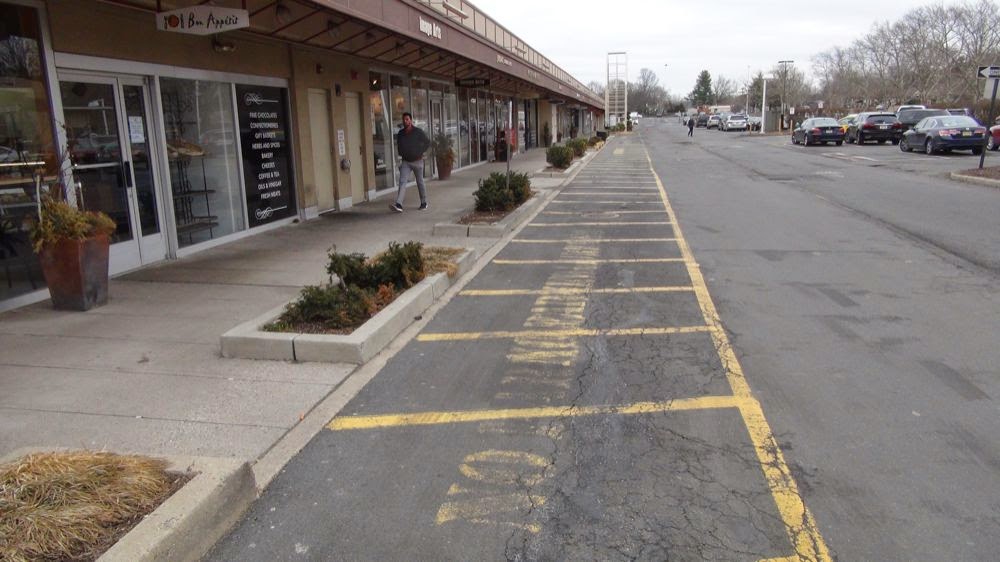 This treeless zone along the west side will be redone. 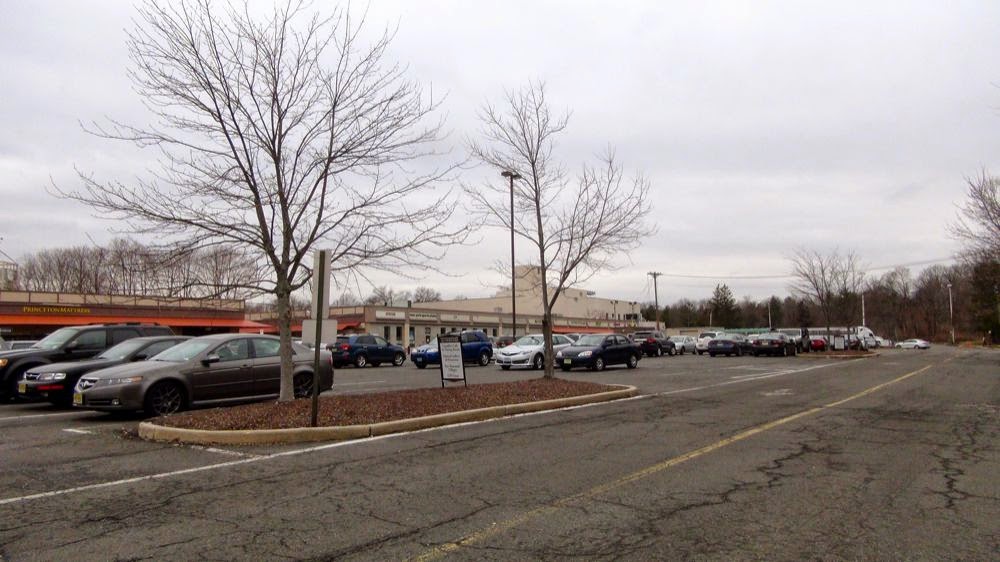 Nearly all the existing "islands" in the parking lot are planted with red maples, a native bottomland species that is actually doing quite well here. Trees like red maples that are adapted to the low-oxygen conditions of wet ground often do well in parking lots and along streets, where the soils are low in oxygen due to compaction. 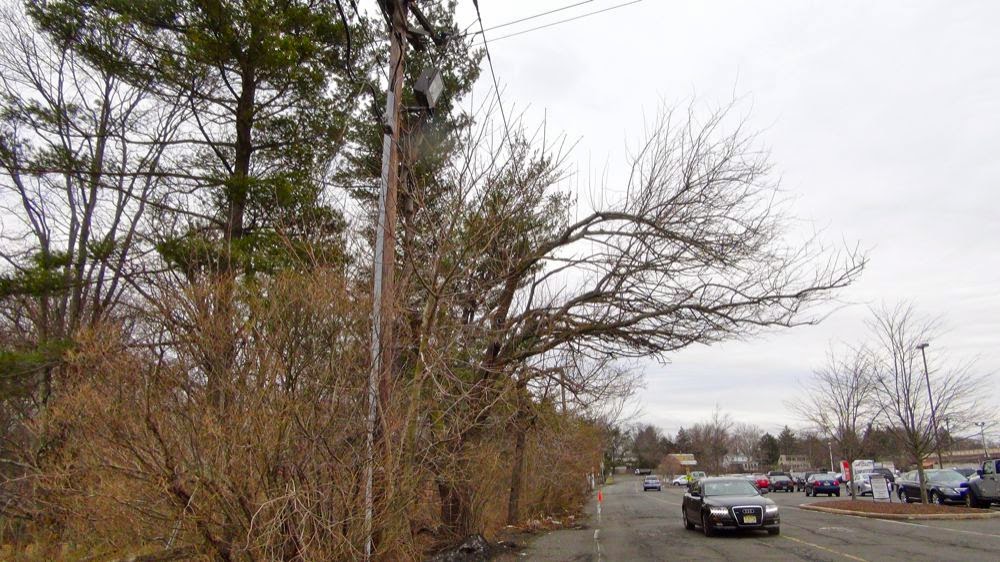 Though the whole parking lot needs a facelift and more shade, it's the backside that particularly needs a "revisioning". Trees growing under the powerline are getting hacked up. The one extending way out may look contorted, but at least it's providing some shade over the pavement. 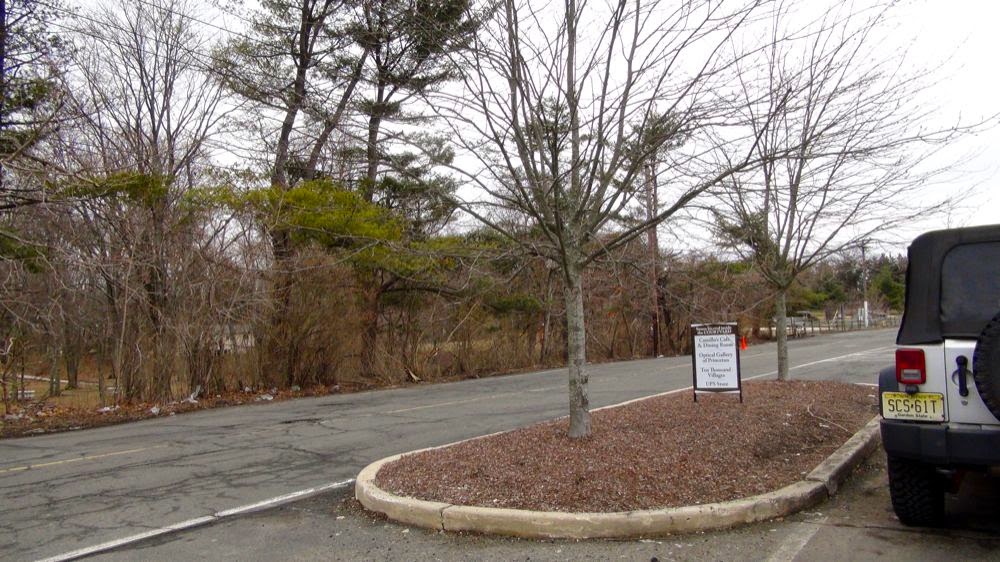 One question is whether the islands could be redesigned to receive runoff from the pavement, thereby providing some water for the trees, and capture and filtration of at least a small portion of the massive stormwater runoff. 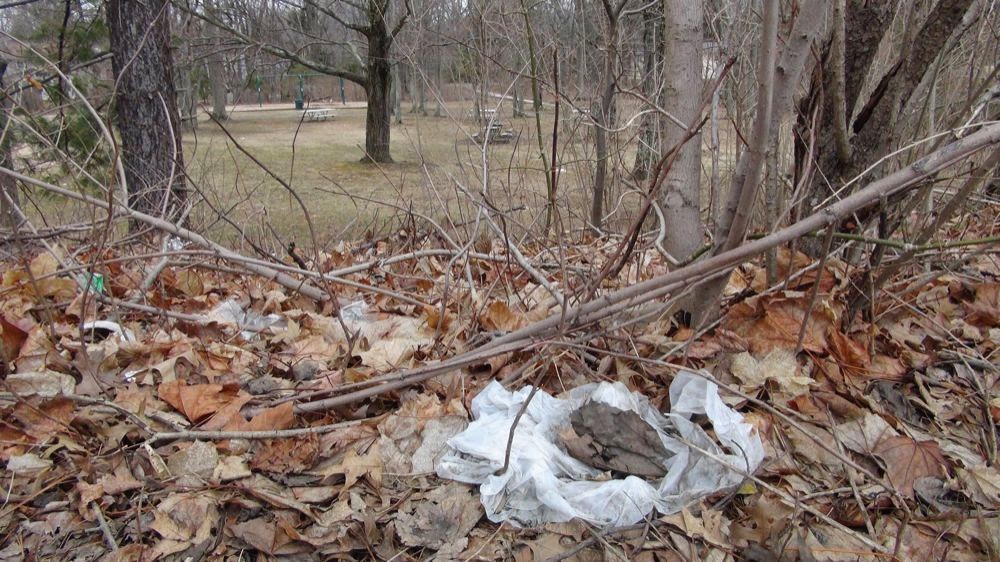 The shrubs lining the "lower east side" of the parking lot are full of trash. 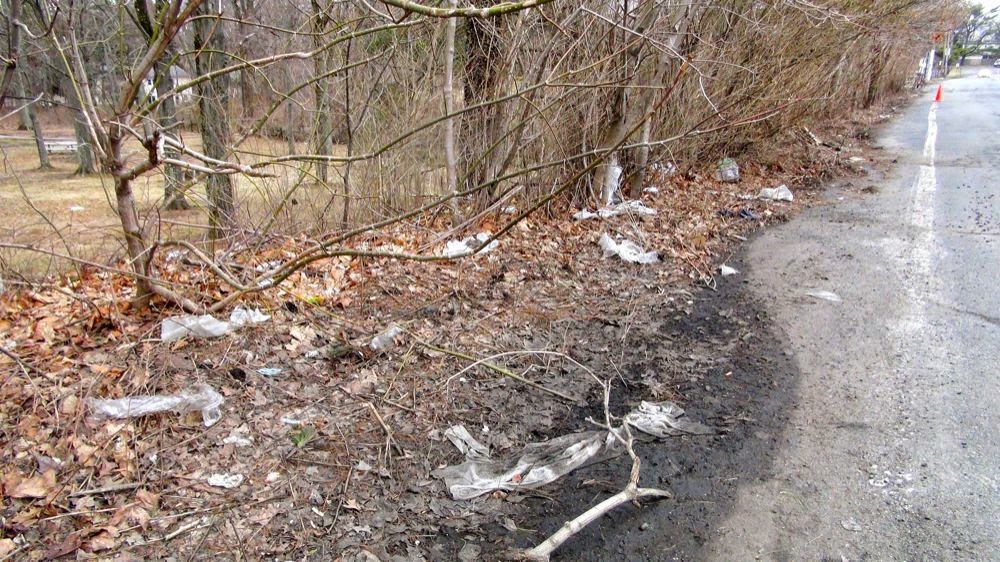 In a way, this blight is a good sign, in that the plastic bags and other refuse are being prevented from heading down Harry's Brook into Carnegie Lake. If it were someone's job to clean up this mess periodically, this unintentional "filtration" of litter from the stormwater would help reduce plastics pollution of the watershed.

While I was taking these photos, drivers passing by were very polite and thoughtful, slowing down or stopping in case I was trying to cross the road. It's a good example of how people as individuals tend to be kind and generous, while we are at the same time collectively creating problems like all of this degradation of Harry's Brook via litter, pollution and flooding. 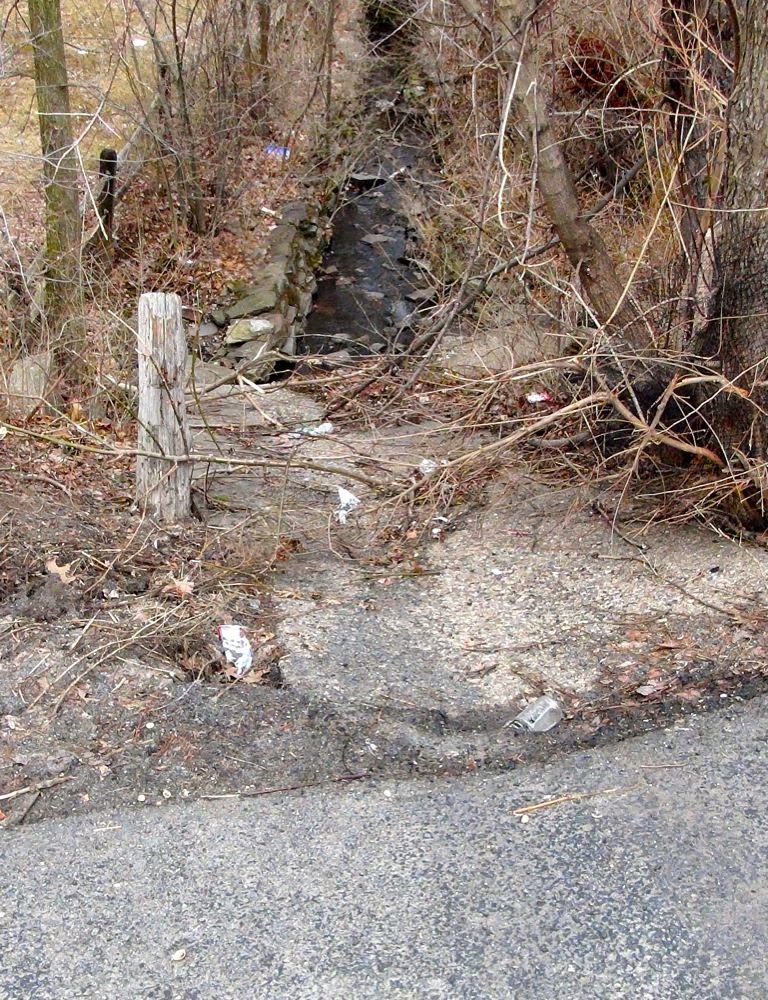 The parking lot is in one of the headwaters of Harry's Brook, and you can see that a lot of stormwater runoff (polluted with oil, heavy metals, salt, and whatever else is left behind by car culture) flows straight into the creek, completely unfiltered. The building roof and parking lot shed massive amounts of water during heavy rains, all of which charges down Harry's Brook, flooding residential neighborhoods before emptying into Carnegie Lake and continuing to the ocean. Princeton contributes to the pollution of the oceans like every other community. The shopping center was built before any stormwater controls were required. 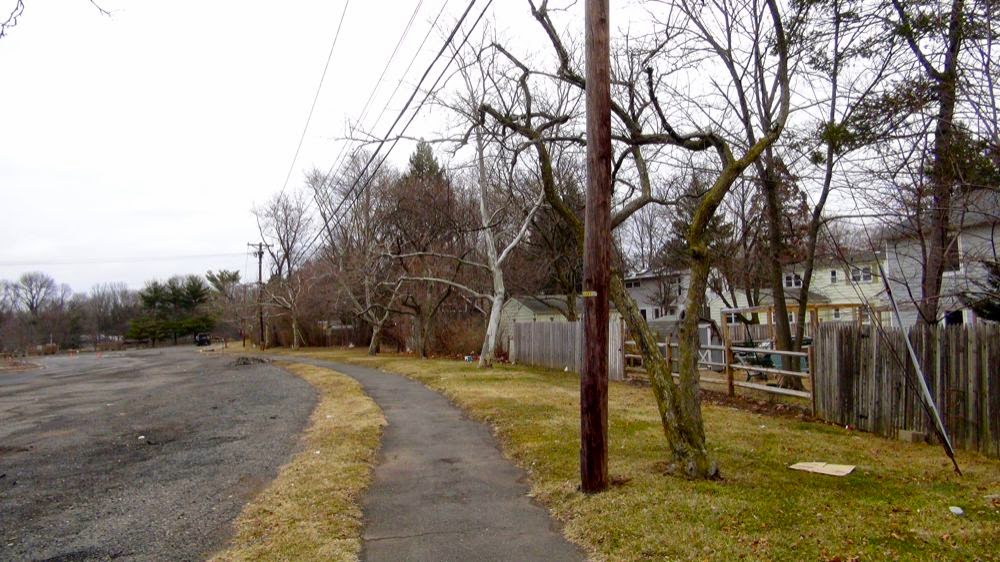 The south side of the parking lot, bordering the back side of houses on Clearview, has a mix of trees growing along the fenceline. 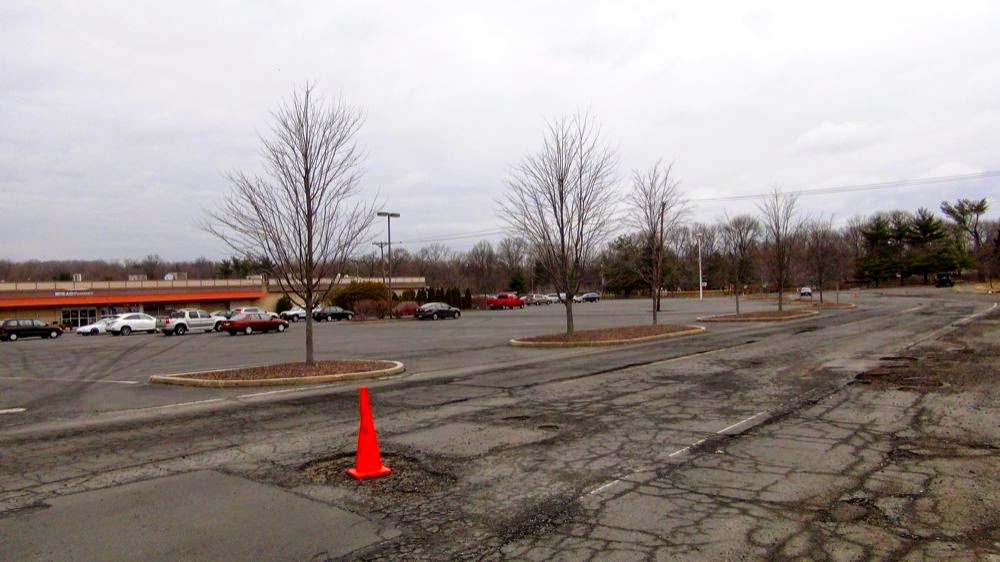 And more islands with red maples provide a tiny bit of shade in the vast expanse of blacktop. 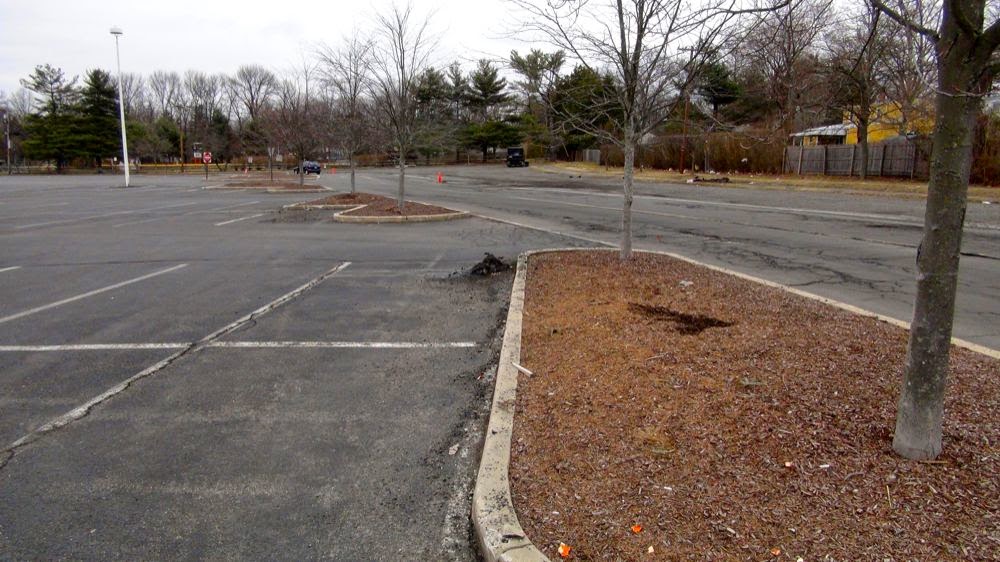 These islands will be removed and shifted to accommodate a change in traffic pattern, meaning that the existing trees will be toast. Figuring out what sorts of trees other than red maples can grow adequately in such a tough location has been a big question. Honey locusts are doing well elsewhere in the parking lot. Hackberries have been mentioned, and an Asian species, Zelkova.
Posted by Steve Hiltner at Monday, March 30, 2015