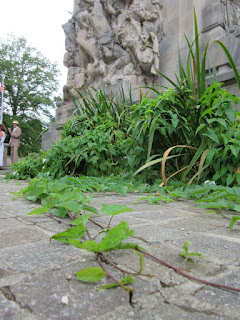 Some may think the battle is long over, carved into stone at Battle Monument, but while George is looking the other way, the bindweed is growing, growing, extending its reach every which way. First it mobs the iris. What could be next? 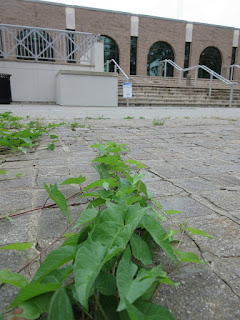 OMG, it's headed straight towards Monument Hall! Won't someone do something? George, we know you and all those other founding fathers were into plants. You had "a vision for the capital city of the United States that included a botanic garden that would demonstrate and promote the importance of plants to the young nation." It says right there on the website. Congress put the U.S. Botanic Garden a stone's throw away from the capitol building, for heaven's sake. But somehow we all got on a high horse and decided plants didn't matter. 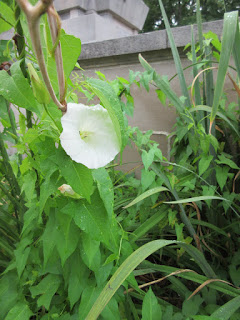 No, that white flower is not bindweed's flag of surrender. 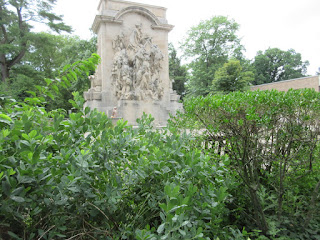 Where George is looking, everything's fine. The left flank is holding. Wild indigo and inkberry continue to grow unmolested. 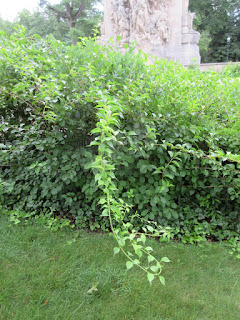 But wait, what's this? Oriental bittersweet, overwhelming the right flank? What audacity. 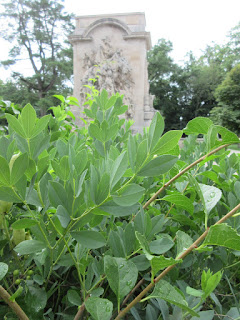 Clearly, the wild indigo is calling for reinforcements, albeit very quietly. Don't be so stonefaced, George. Loosen up, take a look around you. Mobilize the troops. That was a great battle you won there, but the battle continues. We need you now more than ever.
Posted by Steve Hiltner at Friday, July 17, 2015