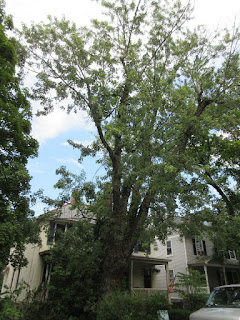 Some can't see the forest for the trees, but for me, it's harder to see the trees, to really look at one or another rather than merely be aware of some vague mass overhead as I pass by. There's so much to take in, so many branches to follow to their logical or illogical conclusions. Easier to glance at the bark, summon a name, and assume the rest.

But that won't do for the chair of the Shade Tree Commission, who you'd think could offer sage advice on what sort of tree to plant. Shall I recommend a silver maple, which has a reputation for dropping limbs, which is to say it grows lots of branches, then loses interest in some of them for no clear reason. They're a bit like people in that respect, who take up a fitness regime or a musical instrument, then end up dropping one or another for lack of time or sustained interest. Dropping a limb sounds scarier than dropping guitar lessons, but I've lived with silver maples in front yards in multiple towns with no consequence other than some very agreeable open shade, so I'm starting to scrutinize the local tree population to see if the reputations some trees have is really deserved. 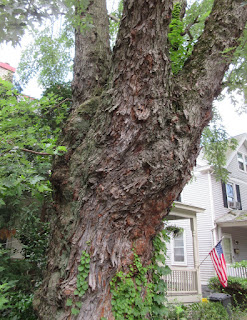 Princeton has a lot of characters, and the same goes for its trees. Maples can become richly drawn with age, all gnarled and quirky, like this silver maple on Madison. Somehow I think of the ruddy face of a pipe-smoking english professor from college days. 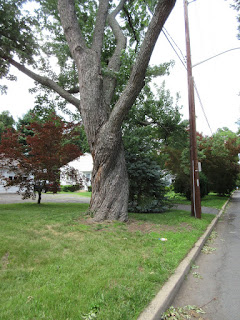 Here's one on Spruce that looks like it's an Olympian discus thrower releasing a mighty throw. 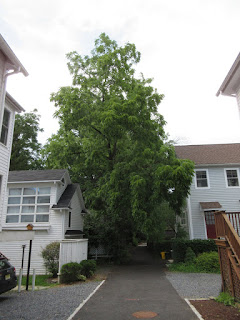 I could say some unflattering things about black walnuts--the messy husks they drop or the juglone they exude through their roots--but what tree doesn't have something about it one could wish were different. Here's a black walnut I'd never seen, flourishing along a hidden alley I'd never noticed, off of Park Place. 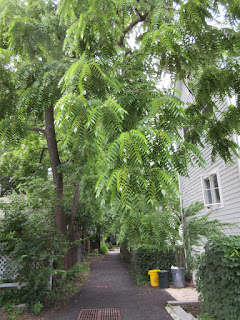 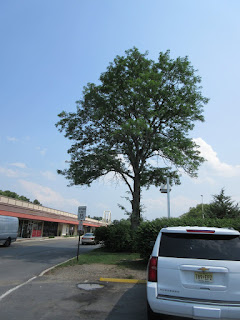 Even a tree presiding over one of the most traveled spots in town, next to McCaffery's, is felt rather than seen unless one makes a conscious effort to look up. How strange to be a honey locust in the modern world, its thorns gratuitous in an America stripped of megafauna, the fleeting, sweet inner lining of its pods forced to compete with year-round Ben and Jerry's, and no advertising budget to grab the attention of all who pass below. 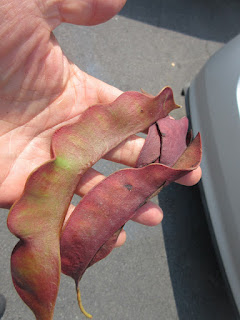 One day I'll find a pod that's just right--these look too immature--and give the inner lining a taste, while someone else is complaining about the mess the tree is making, scattering pods all over the ground, if they even notice.

In the search for a perfect tree to recommend, I'm starting to think that trees are characters first and types second, each responding in an individual way to inner promptings and outer circumstance, tending to serve well despite their imperfections.

Note: There's a new page on this blog, a list of native trees of Princeton, with brief descriptions (not exactly recommendations) based on ten years of observation. Pages should be found along the top of the homepage.
Posted by Steve Hiltner at Saturday, July 04, 2015