"Come see our tiger lilies!", I was told at a party recently. Naturalists get this sort of invitation now and then. I was a bit skeptical that they were tiger lilies, though, because there was mention of spreading, 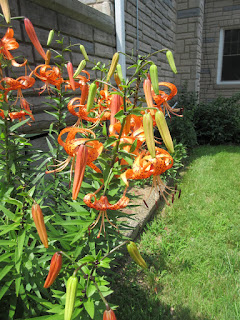 and the only tiger lilies I've come across in Princeton are the ones in this photo, behind Conte's. Nevertheless, I took them up on the invitation--my interest piqued by the owner's enthusiasm about these lilies. 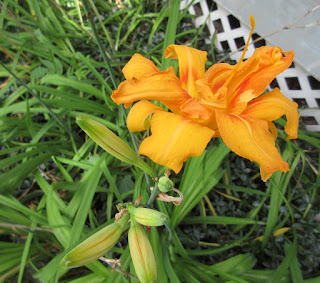 Sure enough, they proved to be daylilies, a step above the humble, unimproved orange found in abundance in my yard and many others, but daylilies nonetheless.

Now, I didn't really want to be a bearer of bad news, or even not-so-bad news, since a day lily is still a lily, whose blooming is no less worthy of the owner's enthusiasm for lacking a tiger in the name. People's relationships with plants should not be taken lightly. The plant names that inhabit my brain in abundance tend to take up only the briefest of residencies in the minds of most others, falling away like leaves in a late October breeze.

So when a plant name lodges firmly and resonantly in someone's mind and heart, it's hard to point out that this plant that has come to be known so emphatically as a tiger lily is in fact a daylily. The flower itself is far from plain as day, but "day" can't compete with "tiger" for affection. Which day is the daylily named for? It could be a good day or a bad day, sunny or gloomy, we really don't know. There's no hint of wildness in a day. A day is a mere vessel to be filled with meaning, not a gloriously fearsome beast stalking your yard, fortunately in the benign form of a flower. As I weighed my options, a homeowner's connection to a plant, facilitated by a colorful name, hung in the balance. What to do?

Long a slave to truth, I sought at least to soften the news, by saying that all lilies that grow in Princeton with that classic orange color really should be deserving of the tiger lily name. 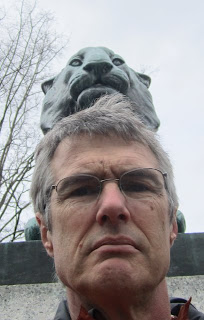 After all, with tigers all aprowl on campus, guarding various entryways, the Princeton University Tigers on one side of Nassau Street, Little Tigers on the other, and tiger stripes dominating the color schemes in parades and giftshops, doesn't tigerdom eventually seep into all things and people who reside here long enough? A certain fierceness, perhaps, lurking beneath the civilized demeanor. If nothing else, it manifests in a Princetonian's capacity to leap into the breach and spout copious, tenacious opinions at town hall meetings.

The owners seemed to take the news well enough. If daylilies they are, then daylilies it is, from here on out, though I could tell a bit of magic had fallen away from their front yard. We continued to the backyard, which had that minimally managed grow-what-will look. I was tempted, because of the ground made wet by a very active sump pump--the house having been built on what was likely once a tributary of Harry's Brook--to recommend various of the floodplain flowers that would prosper there, but resisted. There was something soulful and relaxing in this yard that wasn't trying to be anything other than what it is, shaded by Norway Maples and backed by a thick stand of bamboo that obscured the condos just beyond the fence. 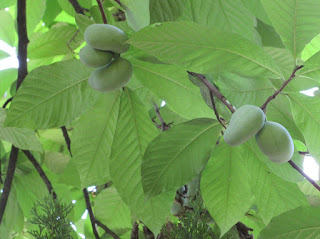 I looked around and saw the usual, a pokeweed here, a rose of sharon there, Japanese honeysuckle growing on the fence, and was going to go back to conversation when I happened to look up and saw, what's this? Pawpaws? The northern growing tropical fruit that many of us covet, many have planted, and many must now wait years for any chance of a crop. And here it was, a mature tree loaded with fruit, prospering unbeknownst to anyone in a grow-what-will garden. 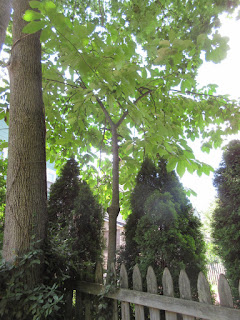 I pointed it out, proud of my find, hoping it might make amends for the loss of a tiger lily. Surely, the taste on the tongue of the word "tiger" cannot compare to the lush, yellow, mango-like pulp of a pawpaw. Only later did I realize that I had taken away a tiger, but left them at least with a paw or two. Who knows, maybe it's the distant descendant of the lost pawpaw patch of Harry's Brook, where sabertooth tigers stalked the megafauna of yester ice age. 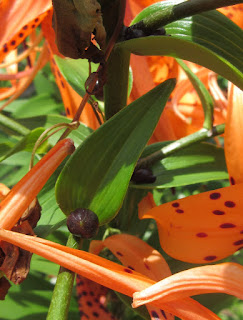 Addendum: If you dare to walk right up to a tiger lily, you will see the spots on its petals and small black bulblets in the upper axils. The bulblets, if memory serves, can be plucked and planted, to make little tigers. 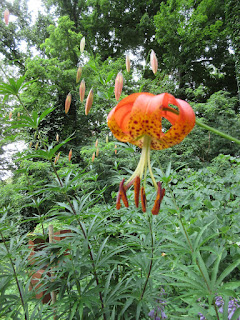 Other lilies hereabouts are the towering native Turk's Cap lilies at Morven Gardens,

with their whorled leaves, 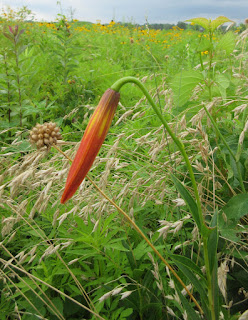 and another, the most truly wild but also the shortest, flying below the deers' radar out at the Mercer Meadows prairie restoration on Cold Soil Road.
Posted by Steve Hiltner at Monday, July 27, 2015