Memory was finally jogged that this is the time of year to be scouting Princeton's natural areas for the dreaded Ficaria verna, a.k.a. fig buttercup, or lesser celandine. Dreaded because it has an alluring yellow flower that makes one want to leave it be when it starts showing up in the yard or local preserves, but then quietly takes over, paving whole valleys. Pettoranello Gardens is carpeted with the plant. In Durham, NC, I once tracked an infestation upstream to a homeowner's yard. He was greatly relieved to find out what plant had taken over his garden, and proceeded over the next several years to completely eliminate it. Unfortunately, by then the plant had spread far downstream and would transform a whole watershed, from one small infestation in someone's yard. He was, however, able to remove some he had put in his son's yard elsewhere in town, before it had a chance to spread downstream. This is why it's so important to get the word out about these highly deceptive species.

When I was working at Mountain Lakes, I'd walk the valley leading down from Stuart School, searching for any small patches that could be eradicated before they expanded beyond remedy. It's satisfying to be able to nip invasions in the bud. Now that my focus is Herrontown Woods, the spring ritual is playing out there. Yesterday's walk yielded no sightings until the very end, when I checked the pawpaw patch we planted New Year's weekend, and headed back through the woods towards the parking lot. There, right where the groundwater seeps out of the ground in what originally may have been a primitive septic system, was a patch of lesser celandine. Already, it has spread down the ditch about fifty feet, but is still of a size that we can eradicate it before it spreads down the valley, beyond control. 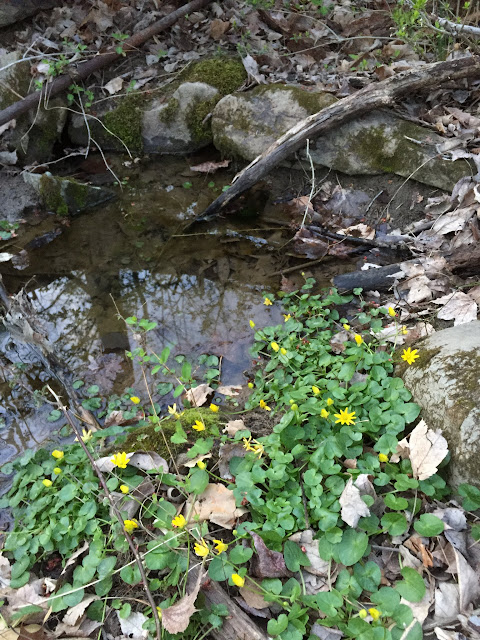 Control options can be found at this link. A comparison of lesser celandine with other yellow spring flowers, such as marsh marigold and celandine poppy, can be found here. If possible, avoid hiking through an area with lesser celandine--there's a risk of inadvertently spreading it into new areas in the treads of your shoes.
Posted by Steve Hiltner at Thursday, March 31, 2016