When Sticks Were Antlers and Kids were Moose 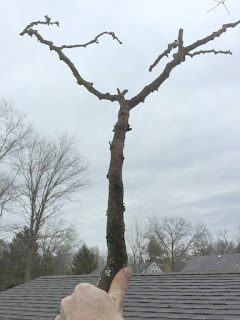 Sometimes, as someone devoted to preserving and restoring nature, I wonder why so much of the rest of the world isn't hardwired with the same sentiments. Why do I see a stick as highly useful, while others see them as litter? Our woodstove is one answer. Not everyone needs kindling.

But there's something deeper than that: an instinct to find value in nature's offerings, no matter how humble, a habit of thinking in which matter triggers imagination. Holding this stick today  brought back a memory of being maybe five years old. It was summer, I suppose, and a group of us neighborhood kids had formed a moose club. Not a fraternal organization that meets in a lodge every month and does good deeds in the community. We were playing as if we were actual moose, living in a tiny woodlot at the edge of the Yerkes Observatory grounds. Our clubhouse was a tree trunk bent close to the ground, making a sort of shelter. Periodically, we'd burst out of the woods and charge out across the lawn, screaming with such fierceness that the gophers living beneath our feet must surely have trembled in their burrows. On our heads would be a pair of sticks, propped up with our hands as makeshift antlers. I somehow gained the status of grandfather moose, so had the largest sticks. I remember those brave charges out across the green, roaring at the top of our lungs. We were no longer diminutive five year olds but transformed into ferocious giants by our imaginations and whatever we could glean from a tiny woodlot.

Maybe that's how nature gets hardwired into one's heart and soul, a lifelong legacy of child's play, when a stick was not just a stick but an extension of our bodies.