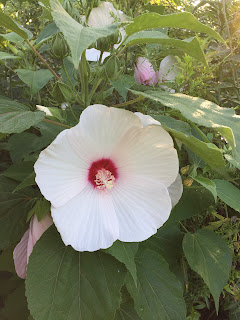 Well, hello there, beautiful. The Hibiscus that's native around here, Hibiscus moscheutos, or rose mallow, is as tough as it is beautiful, thriving along the edges of Carnegie Lake and lining the wetlands of the upper Millstone River, up West Windsor way. Gather seeds from the convenient packaging of its capsules in the fall, and you might end up with some in a wet, sunny spot in the backyard, which is how I know that kayaking up the Millstone River from Carnegie Lake might be particularly lovely right about now.

As part of the Detention Basin Enhancement Program, which did not officially exist until the words were typed a few seconds ago, I took some of its copious seedlings from my backyard and pressed them into the ground at Smoyer Park yesterday evening, as the thunderstorm approached. Combining the planting with weeding, I pulled up a horseweed or pilewort, pressed the Hibiscus root into the resulting hole, then lay the pulled weed gently over top of the Hibiscus, to shade it while its roots take hold. Improvised, but potentially effective. 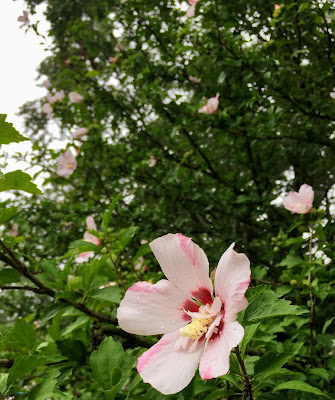 Other members of the Hibiscus genus get into the act this time of year. Rose of Sharon (Hibiscus syriacus) can stand alone as a large shrub, or grow vertically enough to be a hedge. Not native, it tends to spread by seed in the yard, but hasn't made the leap to wilder areas that I know of. 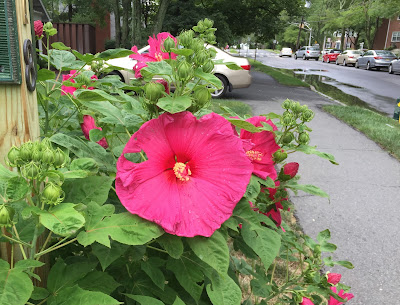 There were big-flowered Hibiscus in my sister's garden in Cleveland that looked like this. It's a cultivar, and I resist calling it the same species as the local Rose Mallow, but am finding no other scientific name on the web.

Update: A week or so later, Flower of an Hour (Hibiscus trionum), an Old World weed, showed up along our curb. Went back maybe an hour later, and the flower had already closed. 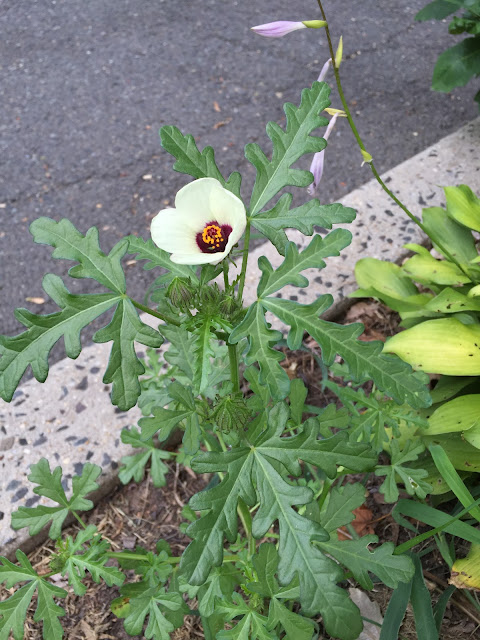