How To Rescue a Raingarden 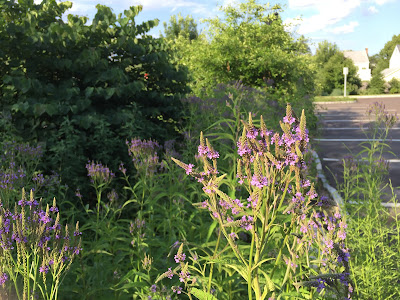 It's doing better now. The blue vervain has rebounded impressively. After being mowed down for most of a year, the native grasses--big bluestem, wild rye, and switchgrass--had looked like gonners, but they too have reappeared in numbers and are reaching for the sky.

Most raingardens, like many Americans, lack medical insurance. There's no money to restore their health when the weeds take over. There's money to design them, and install them, and sometimes even regulations that require they be planted. But to keep them thriving and looking good? Well, they're pretty much on their own.

If you think about it, most urban landscapes are cared for by people who know next to nothing about plants. If the medical profession were run like the landscaping business, hospitals would be manned by custodians equipped with leaf blowers and weed whippers, and anyone who came in with a medical issue would be left to fester, then eventually mowed down when they became unsightly. Under such conditions, trees can survive, and some foundation shrubs, but if you're a plant that's neither tree nor shrub nor turfgrass, life could be short.

The landscape architect who designed this raingarden, in a parking lot a few blocks from my house, likely had considerable training, and hopefully makes a decent living, but the designer is long gone and the garden will only survive if it is maintained. Whoever maintains it must know and be able to recognize, at every stage of their growth, not only the intended plants the designer was familiar with, but also the many kinds of weeds that threaten to overwhelm the intended plants. There's no time to pull every last weed, so efficient maintenance requires knowing which weeds pose a serious threat to a balanced planting, and which are benign. And by the way, all the money was spent on design and installation. Nothing's left to pay the people who determine the plantings fate and need the greatest knowledge.

I should have intervened sooner. Instead, a few years ago, having urged those responsible, to no avail, to hire either me or someone else who could give the raingarden the skilled care it needed, I watched as the intended plants got overwhelmed by a bumper crop of 7 foot high pigweed and lambsquarters. The next year, the landscape crew noticed how weedy the raingarden had become, so they mowed it all down and started treating it like a lawn. That's the classic progression: garden to weeds to lawn. The lack of plant knowledge makes most landscape care like a light switch. There are two positions: on and off. You either let it grow "natural" or mow it down. No selective intervention. Our inner gardens, which is to say our bodies, are cared for by knowledgeable people, who provide skilled medical intervention if need be. Why not a raingarden? The answer is that people matter, while saving a raingarden, like saving a livable planet, is considered optional. 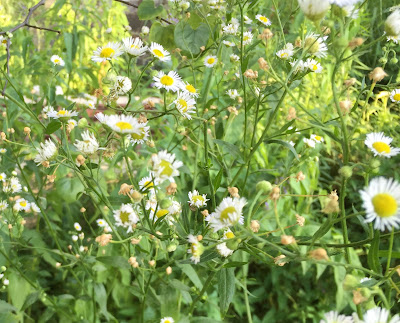 Strangely, I feel lucky. Yes, I'm putting in a half hour here and there of volunteer work because of a culture's disconnect with plants, but one thing I learned from my astronomer father was to make a project more interesting by thinking of it as an experiment. How dramatically will a neglected raingarden respond to a little TLC? How little time can be invested and still get a good result?

There's such pleasure--why don't others feel this?--in rescuing a garden like this. Multiple levels of restoration happen at the same time: beauty, diversity, ecological function. And then there's the strategy, like playing bridge--using finesse to gain the best results with the cards you're dealt, dealing with multiple variables as the drama plays out. A different strategy is applied to each kind of weed. This is wild gardening, not total control. Leave the daisy fleabane with its weedy form but attractive flower. It's not doing any harm and won't take over. Take advantage of last night's rain to pull otherwise stubborn weeds out of the softened earth. Find satisfaction in the ease of undercutting a dandelion with a shovel blade. Catch mugwort or Canada thistle early, before they have a chance to spread. Feel the deeply American frontier mix of wit and muscle, mind and body. Live the wisdom of a hand-me-down phrase like "a stitch in time saves nine." 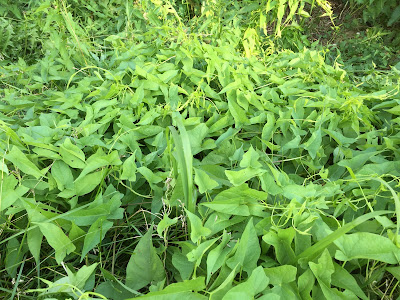 Otherwise, you end up with large swaths smothered with bindweed, 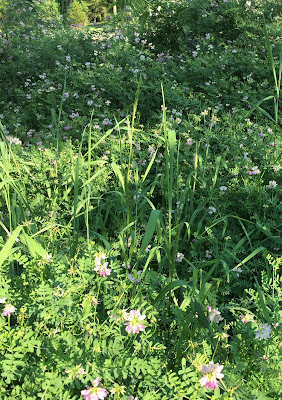 or carpeted with crown vetch. These will take something more than a clean undercutting with a shovel. 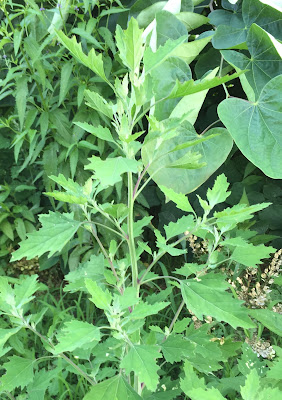 The solitary lambsquarter poses no threat at this point, and could end up in a salad. 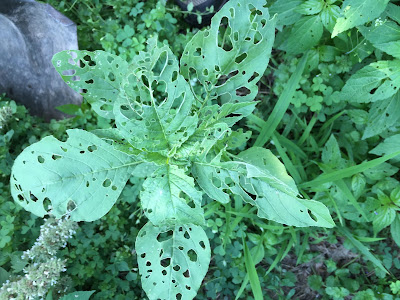 The amaranth is already some insect's salad. 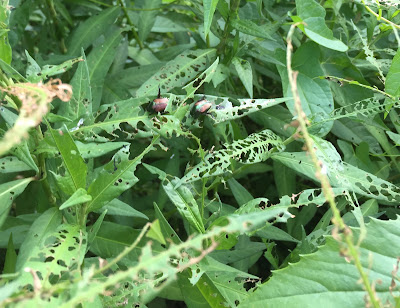 The smartweed (Polygonum) could prove aggressive, but the Japanese beetles are doing a good job of weakening its spreading tendencies. May as well leave it for now. 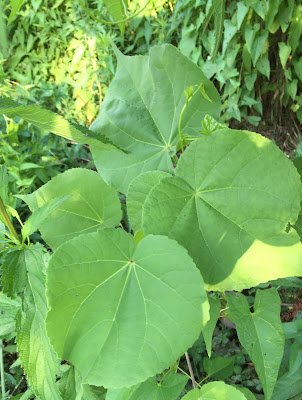 Velvet leaf isn't doing any harm, and will likely be eclipsed as the intended plants gain dominance. 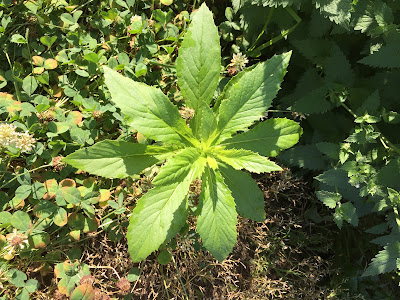 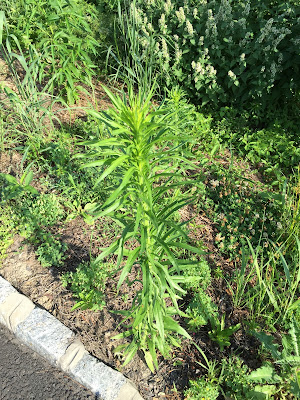 horseweeds are native weeds that grow tall and gangly, contributing to a weedy look if left in. 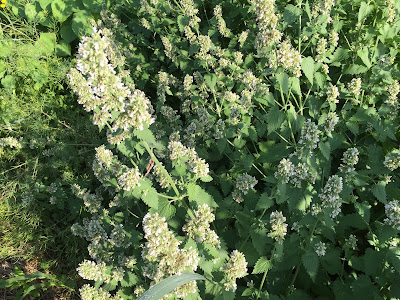 The catnip is staying for the meantime, though as a mint it could prove aggressive. 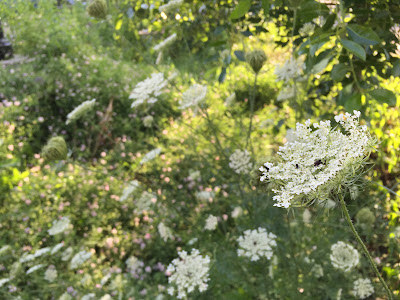 The Queen Anne's Lace (the same species that makes the carrots we eat) is pretty, but I've seen it take over fields in the midwest. Maybe remove it after the flowers fade.

There's no perfection here, and no certainty that each decision is the right one, but the results have been heartening, with the original plantings showing more resiliency than expected. 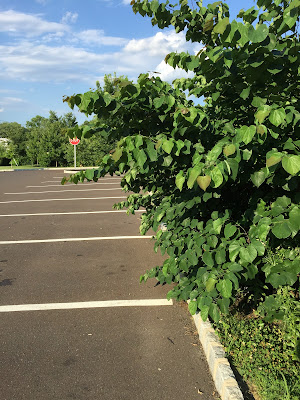 Next time I'm walking the dog over that way, maybe I'll remember to take pruners to trim back the redbud. Perhaps it should be called "casual insistence", this integration of garden rescue into the fabric of one's life, pulling weeds every week or two while the dog waits patiently. There are a few of us in town hard-wired to care in this way, with inner clocks that say "time to go take a look", who find this sort of casually serious and seriously casual persistence with a garden to be satisfying. Perhaps someday more people, maybe even some professional landscape crews, will discover the pleasure, and fewer raingardens will be lost to the weeds.

In the meantime, breathe in the cool air of an early summer evening, and feel like a conductor molding nature's growth force into a symphony, orchestrating the comeback of a raingarden nearly lost to the world. 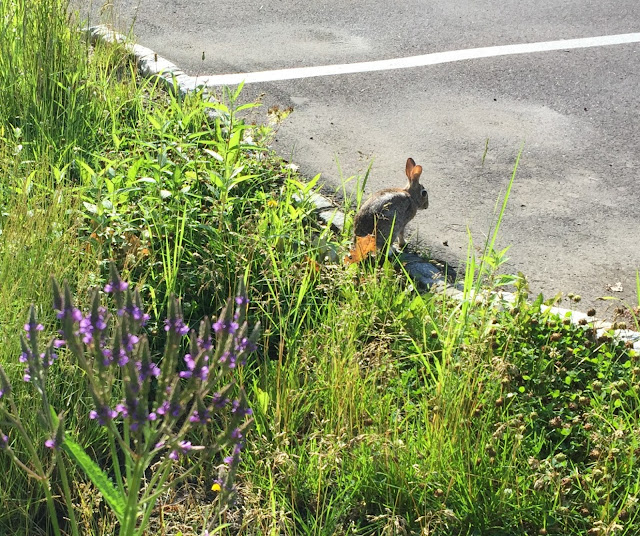