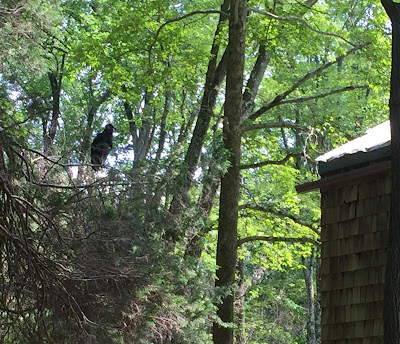 A pair of vultures has long hung out around the Veblen Cottage, up along the red trail in Herrontown Woods. They can seem a bit creepy, perched on top of the chimney, haunting the building with their symbolism of decline and imminent demise. But I've also seen vultures perched on restored buildings, and over time I've stopped investing them with negative connotations.

This quote from the Cornell Lab's Birds of North America site suggests that Herrontown Woods' pair of black vultures has a deep and lasting relationship, and has been finding what they need there, year after year. Perhaps they've been raising their young in the corncrib all this time, unbeknownst to us.


"Black Vultures do not build a nest. Instead they lay their (usually two) eggs on the bare ground in a cave, hollow tree, abandoned building, or other dark recess. Pairs will continue to use a nest site for many years as long as breeding is successful. Black Vultures are monogamous and maintain long-term pair bonds. The pair associate closely year round and may feed their young for as many as eight months after fledging. This prolonged dependence of the young on their parents may, in part, be responsible for the strong social bonds with kin that Black Vultures maintain throughout their lives." 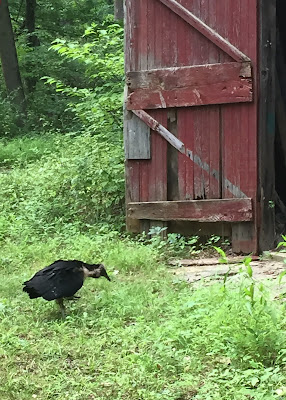 A couple days ago, I was walking by the cottage and noticed a strange site. Up ahead, standing outside the barn door, was one of the black vultures, its fluffy neck feathers all a'jumble. Another vulture was perched in a low branch behind the cottage. Neither flew away as I approached.

The vulture on the ground looked embarrassed, its head down. It walked into the barn and stood there, as if deeply sad. They were either juveniles or molting adults.

Later, I remembered that last year in August a friend had noticed that geese had disappeared from Mountain Lakes. Some research showed they had gone off to molt at an undisclosed location.

I asked some birders with the Friends of Rogers Refuge if vultures molt this time of year, after finding nothing about it on the internet. Laurie Larson replied:


"I know they molt wing feathers during the summer, after their young fledge, and it would be consistent with most other species of birds to molt the rest of the body at the same time. This time of year most birds have less demands on their energy than they would during migration, winter, or when rearing young, and food is relatively abundant, so it’s the time of year to put energy into growing feathers. Embarrassed-looking vultures… interesting thought!"

After seeing the photos, however, she wrote back:


I think the vulture by the door in your photo is probably actually a fledgling. The adults are bald - their heads have bare skin. I’ve never seen a vulture so young, so I didn’t know they had black fuzz on their necks. It’s also possible that the reason it didn’t leave is that it isn’t yet a very good flyer. (It’s hard to tell whether the second bird, sitting in a tree, is another juv. or an adult). Wikipedia does have a portrait of a juvenile, which seems to be somewhat older than yours. It has a fully feathered neck rather than the bare whitish adult skinhead look. Yours is just growing those feathers. Congratulations; this would seem to be a rare look at a very young vulture.

The timing is right as well. Local nesting starts around April 1. Wikipedia says the eggs hatch in 28 - 41 days; and after hatching the young require 75-80 days to grow to be flying independently. That puts it around August 1.

As you may know, Black Vultures have expanded their range north through New Jersey rather rapidly and now are being seen throughout New England to southern Maine. When I started doing the Princeton Christmas Bird Count in 1982, I was assigned the territory including Mountain Lakes and Woodfield Reservation. Black Vultures began to show up in the huge roost that existed at Coventry Farm during the 1980s (the elder Mrs. Winant, rest her soul, used to feed them dog food every morning) and the numbers increased rapidly until the roost was dispersed after her death. One of the first nests in the state was found in a shed in Monmouth County, while locally an early nest was on the Princeton ridge in a cave near the bouldering area called Cradle Rock, up behind Woodfield. The area had not yet been developed with all the huge houses along Drakes’ Corner Road.

I would not be at all surprised if the vultures have been nesting at Herrontown for years. I hope the corncrib is going to remain undisturbed for these gentle and interesting birds to continue to live in, even as your project to protect and repair the house has succeeded. Congratulations on that as well!


So, it sounds like we have some fledgling vultures at Herrontown Woods, and an additional reason to save the little barn and corncrib as part of the 1875 cottage farmstead that mathematician Oswald Veblen used as his study before giving it to the county in 1957.

The question of whether and how vultures molt is still up for grabs. And I wondered if molting birds are as down-in-the-mouth-looking as the fledgling vulture, standing there in the barn. Does a molting bird know it will soon regain the ability to fly, or might the bird, stripped of its identity, fall into an existential crisis that ends only when new feathers grow? And is that feeling anything like what people and other sentient beings will feel tomorrow, when the sun seems to molt, high above us? 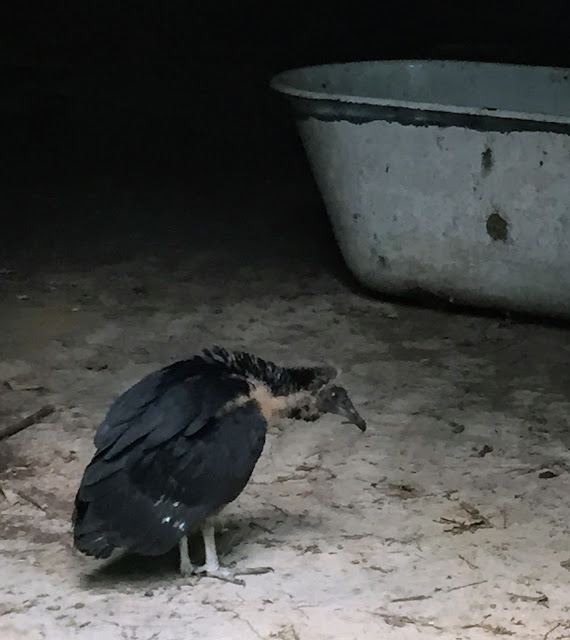