The Saga of the Black Vulture Family Continues 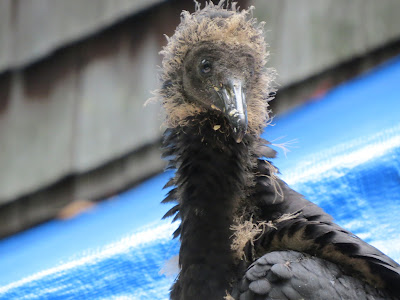 Now we know what the Muppets creators used as a model for Big Bird. This is one of two black vulture fledglings born this summer at the Veblen farmstead in Herrontown Woods. In this photo, it's perched on the first story roof of the Veblen Cottage, which almost got demolished this summer, but it looks like we'll now have a chance to save it. There are many ways in which culture intersects with and complements nature at Herrontown Woods, and this is one of them. "Big Bird's" parents--black vultures mate for life and are unusually attentive parents--have been seen around the farmstead for years. Our attention being on other things, this is the first year we've actually witnessed their young. 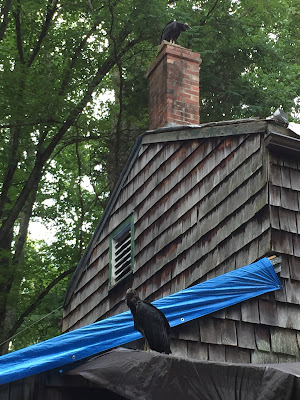 The farmstead's version of Big Bird is the weaker of the two fledglings, which two days ago were together perching on the cottage, with the healthier one on top of the chimney. That Big Bird somehow found the flying capacity to make it up on the first floor roof is a new accomplishment. 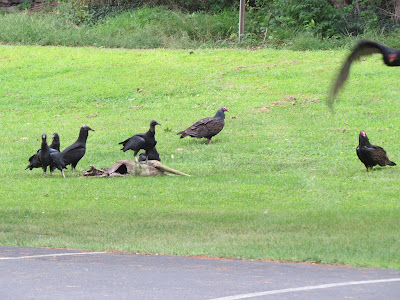 The reason for the parents' absence was made more clear the next morning, when I received an email from birder Laurie Larson. She had just passed by a roadkilled deer near the intersection of 27 and River Road, on the lawn of the Princeton Church of Christ. Some people are ambulance chasers. Taking an interest in vultures means becoming a roadkill chaser, at least for a day. 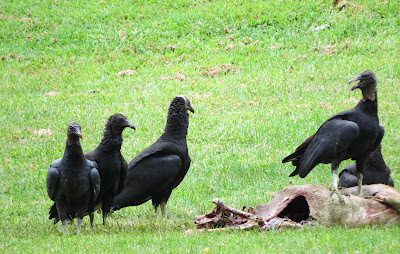 There were seven black vultures and 3 turkey vultures performing their custodial function on the carcass. 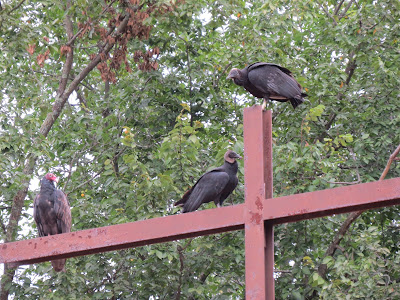 Just getting out of a car 100 feet away was enough to send most of them flying up to ornament the church's cross. 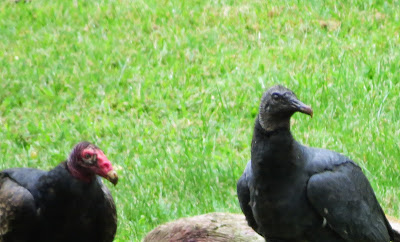 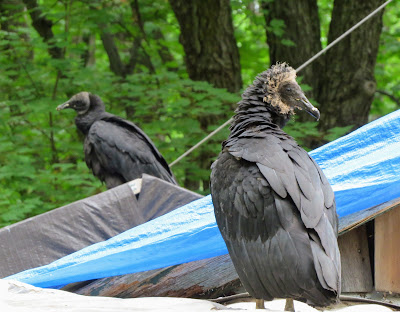 Though no juveniles were partaking of roadkill (do they need to lose their facial fuzz first, for sanitation purposes?), the stronger juvenile was missing from nearby Herrontown Woods. In its place was one of the parents, which might have brought some food back for the still stranded juvenile to enjoy, via regurgitation. 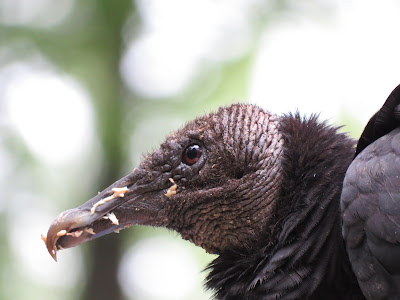 Interestingly, the vultures are much less skittish at the cottage, watching us calmly as we watch them from down on the ground. With a good zoom lens, it's possible to inspect the odd growths on their beaks, which seem like they could be a way of telling them apart. 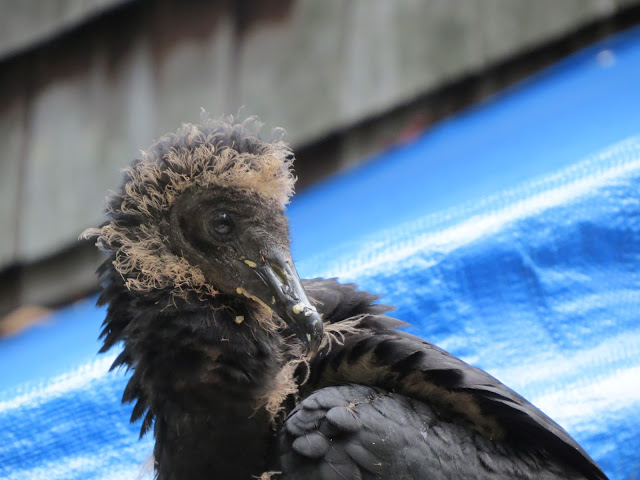 We'll see if Big Bird gains the wherewithal to fly. Clearly the parents haven't given up.

There's lots of interesting info about vultures on the web. New World vultures are not closely related to Old World vultures, but have evolved to similar forms to perform similar ecological functions. One website, with "16 Things You Might Not Know About Vultures," at Annamiticus.com, works to save rhinos and other endangered species. I've emailed them to see if they know Esmond Bradley Martin, who we discovered is a descendant of Andrew Carnegie's childhood friend and business partner Henry Phipps, Jr, and a grandstepson of the builders of Veblen House who has devoted his life to saving rhinos and elephants from extinction.

The adventure of discovering and learning about all the characters associated one way or another with Veblen House and Herrontown Woods continues.
Posted by Steve Hiltner at Wednesday, August 30, 2017