Waiting to Hear About Monarchs 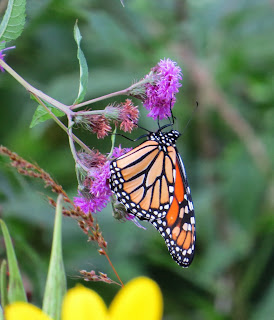 For months, I've had a blog post in the draft folder, entitled "Monarch Rebound." That title reflected the encouraging increase in sightings of monarch butterflies in the Princeton area in 2017, and an encouraging report from Mexico on Oct. 30, as monarchs from all over the eastern U.S. began arriving at their overwintering site in the Sierra Madre mountains west of Mexico City. A Nov. 9 report also sounded upbeat, describing fall '17 as "the latest migration on record," though with large numbers of monarchs still lingering up in the northeastern U.S.

Hurricane Harvey's incredible deluge in Texas may have decimated butterfly populations in that region, but was early enough in the fall that it didn't coincide with the monarchs' migration south, which would funnel down through Texas several weeks later.

The number of monarch butterflies overwintering in Mexico is normally counted in December, after the monarchs have arrived and established their overwintering colonies. An excellent description of their overwintering behavior can be found at Monarch Joint Venture. Last year, the announcement of overwintering numbers came in early February. Numbers for the past two years were up from the all-time lows of the three years prior. With the high numbers of monarchs seen in the northeast this past fall, the population trajectory looked promising.

But the lack of an official count this late in February is unsettling. The Washington Post came out with an article in January reporting that the monarch numbers in Mexico are down, explaining that an unusually warm fall delayed migration south. High numbers were reported along the Atlantic coast flyways, but because migration was so delayed, the butterflies may not have made it to Mexico. And a Feb. 2 report on the west coast's population of monarchs, which overwinters along the coast of California, showed a small decline.

A big problem remains the massive agricultural use of glyphosate on "Roundup Ready" corn and soybeans, which has eliminated milkweed from farmland, particularly in the midwest. Herbicides are also used along roadsides, where just one pass can obliterate longstanding populations of native perennial wildflowers, including milkweed.

Frequent mowing to keep roadsides looking manicured also prevents wildflowers from blooming. Some states are realizing that roadside management could be used to assist monarchs. Reduced mowing not only reduces the burning of fossil fuels driving climate change, but also allows wildflowers to bloom, providing nectar to fuel the monarchs' migration south, assuming they're able to dodge cars and trucks at the same time. 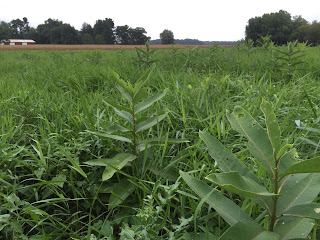 Here's an example of common milkweed growing in an unmowed, unsprayed field next to Quaker Road in Princeton. 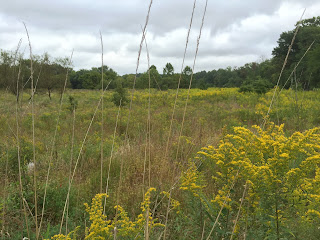 Farther out Quaker Road is a field that one fall had dozens of monarchs feasting on nectar from bright yellow tickseed sunflowers. An annual, they have mysteriously disappeared from the field in recent years, though goldenrod remains.

We've converted some detention basins from turf to native grasses/wildflowers in town. This and the many efforts by gardeners to plant milkweed and other wildflowers surely help. But even those of us who make an effort have little choice but to feed the radical changes in climate that pose the greatest threat. We are trapped, by politicians who refuse to take the necessary action against climate change that will finally ween the nation of a dependence on fossil fuels. Until then, nature will remain under invisible chemical attack, even by those of us who want so much to see it thrive.
Posted by Steve Hiltner at Sunday, February 25, 2018