A World Paved With Fig Buttercup?

There are many types and degrees of invasive behavior in plants. Dandelions are weedy in lawns but cannot survive in the shade of a forest. Japanese maple and Rose of Sharon may seed prolifically in a garden, but rarely show up in the nearby nature preserve. Bamboo, kudzu and Asian wisteria become like castles in the landscape--formidable, exclusionary, and deeply entrenched but limited in extent. They form dramatic, isolated clones that fortunately leave most of the forest untouched. Stiltgrass by contrast is a frail annual easily pulled, which nonetheless can have a far greater impact, coating the ground of large swaths of forest with billions of plants. It thrives in shade but tolerates sun, spreading into garden beds and lawns.

We, with our big brains and bodies, are built to take on large, distinct foes, yet quickly grow discouraged when faced with a threat that is small but hugely numerous, whether it be an overabundance of carbon dioxide in the atmosphere, plastic in the ocean, those tiny odorous house ants in the kitchen, or a ubiquitous weed in the garden. That pile of papers on the desk falls into this category as well. If the small, numerous thing is a disease pathogen that attacks us directly, we have strong institutions that engage to defend us. But if the small, transformative force represents an indirect threat, impacting our environment--our oceans, landscape or climate--rather than us directly, we lack both sufficient institutions and the will to resist. This can be considered society's achilles heel.

As a local example, our big-little hamlet of Princeton is being gradually paved over by a little plant that is pretty, and seemingly benign, yet is also extraordinarily aggressive, poisonous to wildlife, and overwhelming in its numbers and rate of spread. By mid-summer, it will have faded back into the ground, but in spring it looks like an expanding rash coating the land. It numbers in the billions, and cannot be easily pulled. Even its common name is hard to get a good hold on, with "fig buttercup" having displaced "lesser celandine" because the plant has the buttercup flower and fig-shaped tubers. The scientific name is Ficaria verna, with verna referring to its spring growing habit.

In the photo is an advanced invasion in Pettoranello Gardens that long ago spread downstream to Mountain Lakes Preserve. The more land it covers, the less edible the landscape is for wildlife. Our investment in open space acquisition is undermined as the acreage of functional wildlife habitat continues to shrink due to displacement of natives by introduced species that wildlife won't eat. 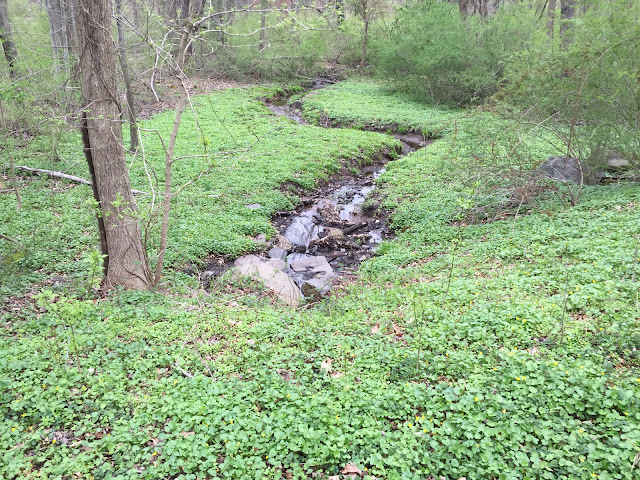 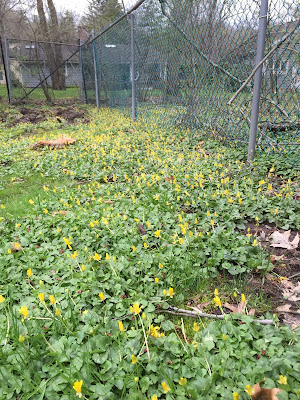 Now the fig buttercup is spilling into the nearby neighborhood along Mountain Avenue, spreading down-slope from one yard into the next. This patch spread through the fence, and through the neighbor's yard, 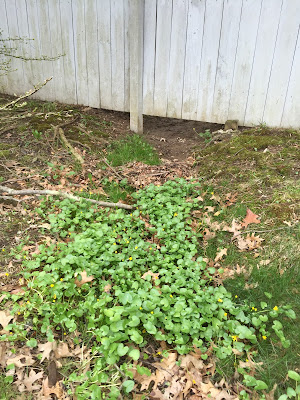 then popped out under the fence on the other side, ready to head further down the street. This species behaves like plastics pollution in that it becomes widely spread for lack of any organism able to eat it. Nature's checks and balances, developed through eons of co-evolution and adaptation, are circumvented when a new species like fig buttercup is introduced from another continent. 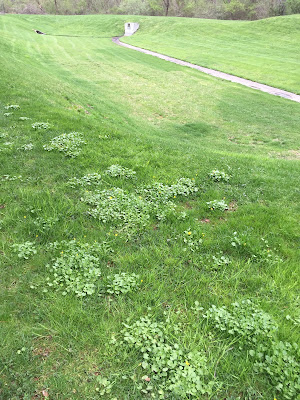 Here it is at Elm Court, a few blocks further on, poised to spread into and eventually coat their detention basin. 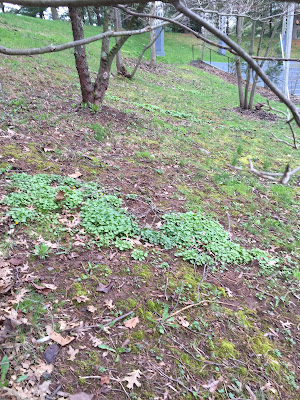 There used to be some solace in thinking that fig buttercup was limited to low, wet ground, but here it has become established along a slope next to the stage at Pettoranello Gardens. Audience members will slip on it, pick up some of the underground bulbs in the treads of their shoes, and transport the plant to new locales. What will stop it from eventually paving all of Princeton? 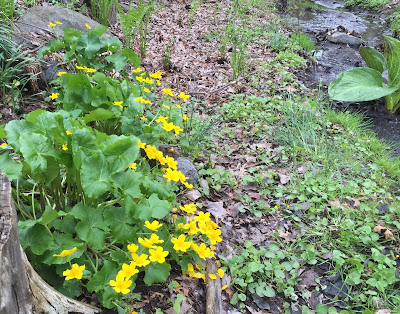 For contrast, here is the native marsh marigold, with which the fig buttercup is often confused. It's growing on the edge of the stream in Pettoranello Gardens because I planted it there a few years back. It's bigger and more showy, but doesn't take over like the fig buttercup. This is the classic example of how many landscapes have become dominated by invasive introduced species, while the native plants become rare. 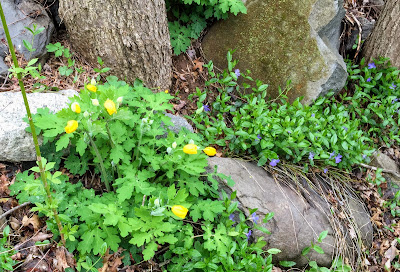 Another attractive native yellow flower in spring is celandine poppy (unrelated to "lesser celandine"). I've never seen it growing naturally in the Princeton area, but it is used in landscaping. It has a nonnative lookalike that can be weedy but not as invasive as stiltgrass or fig buttercup.

Because fig buttercup is so aggressive and so hard to remove manually, careful use of herbicide is really the only means homeowners and preserve managers have to prevent it from getting established and ultimately taking over. Early detection and rapid response are the best recipe for minimizing herbicide use. We can't wait a million years for nature to adapt and re-establish balance, as one of the more bizarre books on invasive species has claimed.

Maybe research could eventually lead to a biological control being introduced to limit the fig buttercup's aggressive spread, but that requires that institutions be in place that can afford to do the many years of research and testing required, with no guarantee of success. In the meantime, fig buttercup continues to pave Princeton, one nature preserve and yard at a time.