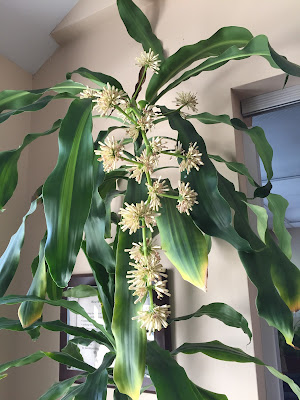 I used to take care of indoor plants, among them being Dracaenas like this corn plant, but had never seen one bloom before. This one was at the West Windsor Senior Center, where our McCarter Onstage community theater group performed recently. 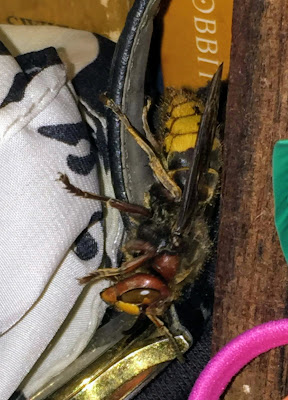 Meanwhile, about a week ago, my daughter called me to her bedroom with a tone of urgency, and showed me a large wasp that had somehow found its way inside and onto a bookshelf. It was big--big enough to be a cicada killer, which is of very little threat to people and seeming early on the scene if it wants to go after cicadas. I got it to climb onto an object, took it to an open window, and blew it off into the great outdoors. Time to get those screens out of the basement and onto the windows. 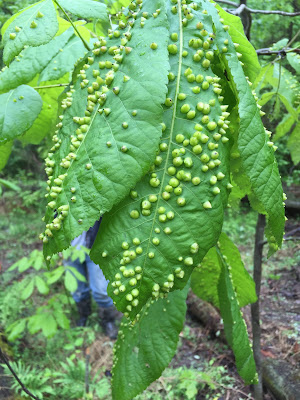 Galls always come as a surprise, no matter how common. This one's looking like a hickory leaf gall, on a hickory sapling at the "Phoenix Garden"--a native garden we're planting at Herrontown Woods where a pine grove was progressively knocked down by wind and ice storms in recent years. Supposedly an insect dwells inside these galls, but none could be found. Tulip tree (a native relative of magnolias known as Liriodendron tulipifera) bear flowers high up in the canopy. Only the occasional fallen twig reveals what complex beauty lies overhead.
Posted by Steve Hiltner at Monday, May 28, 2018